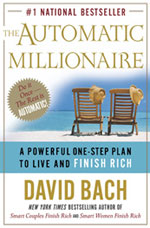 This week, The Simple Dollar takes a look at David Bach’s The Automatic Millionaire. I enjoyed Bach’s earlier book, Smart Couples Finish Rich, but will I like this one, too? Let’s find out.

The sensational title of this book is a big eye-cather when you see it on the shelf. In fact, this book was one of the first books I read when I was in financial armageddon and I was stumbling about looking for answers – I couldn’t help but be attracted to the title of the book. I have great memories of staying up late and devouring this entire book in a single sitting, wondering to myself how this could all be so simple, yet I missed out on so much.

Basically, Bach focuses on two major concepts throughout the book. First, one should pay themselves first by automating contributions to retirement accounts and other investments before even thinking about living expenses. Once this is done, Bach uses the power of compound interest to show how even a small amount of paying yourself first can grow into, well, millions of dollars over the years.

In short, the sensational title isn’t a lie at all: this book really is a plan to become an automatic millionaire, which excited me greatly the first time I read the book. Since then, I’ve read mountains of personal finance books, and now that I’ve returned to this one, the big question I ask myself is whether it holds up in comparison to other personal finance books. Does the message contained in The Automatic Millionaire really stand up, or is it a book best left to people just starting their financial journey? Let’s find out.

The first portion of the book focuses on the “pay yourself first” concept, which basically boils down to putting away investments for the future right off the top, before you even look at living expenses. It’s a simple concept, but one that most people either (a) don’t believe in, or (b) believe is far too difficult to try (usually because they’re “just getting by” as it is).

The truth is that the “pay yourself first” concept, even if you pay yourself only a small amount each day, simply works. Let’s say you are able to put aside ten dollars a day; that gives you $300 a month to invest. Start doing this when you’re 25 and put it in investments that earn an average of 10% a year, do you know what you’ll have on your 65th birthday? $1.66 million.

Many people think about a ten dollar bill and can’t possibly connect it to being a millionaire, but the power of compound interest makes it so, and people who can harness the power of compounding are the ones that become rich; people who don’t spend their lives scraping together two dimes to get by. Bach spends several pages focused on this concept alone.

Bach also spends time explaining how it’s not difficult, either: just make the whole thing automatic. Withdraw it automatically from your paycheck each pay period and you’ll soon find your savings building up … and up … and up. Automation is the key, though, because without automation it becomes very easy to simply not save the money and instead use it for an unnecessary living expense.

The “pay yourself first” concept presents a problem for many people, however, as their living expenses often match (or even exceed) their income.

Here’s an example from my own life that demonstrates the latte factor quite well:

When I was first starting out in professional life, I would start off each day with a latte and a bagel, costing together about $5. I would also hit the vending machine a couple of times each day at a cost of about $2 a visit. On my way home, I often would stop for a snack of some sort, adding up to about $3, and about two days a week would stop at the bookstore, averaging $10 a visit. Little expenditures, right? In a single seven day week, that added up to $80. Over a year, that comes out to $4,160. Investing that amount each year at 10% annual return until I was sixty five came out to $1.92 million dollars.

In other words, that morning coffee and that occasional new book was stopping me from becoming a multimillionaire.

So, if you cut out the latte factor (even partially) and invest that money each month, you can wind up quite rich in the end thanks to the power of compound interest.

Obviously, there are a few minor caveats here: inflation will reduce the actual value of that $1.92 million (meaning that a dollar then won’t be worth what it is today), and you’re anticipating always being able to put that amount away every single month, no matter what. On the other hand, even with some strong inflation, two million dollars is a nice nest egg.

The remainder of the book finds Bach applying the “automatic pay yourself first” concept to various aspects of financial life: building an emergency fund, being debt-free, and buying a home. In each case, the application is nearly obvious once the concept of making it automatic is clear, so let’s focus on that.

The “automatic” portion of The Automatic Millionaire basically refers to the process of setting up an automatic deduction from your checking account each week or month into another account. For example, if you’re saving to build up an emergency fund, you might set up an automatic deduction of $75 each week into an ING Direct savings account. On the other hand, if you’re paying off a home mortgage, you might set up automatic payments to the group that holds your mortgage.

This concept is very psychologically powerful. By simply having that money go away without any effort from you, you begin to reshape your life to this new “reality” quite easily. You check your account and when you see what’s in there, it already has the money you need to pay yourself taken out, so you budget based on what you have left. Over time, this new situation becomes the “norm” for your day to day life, but that money you’re withdrawing just keeps building up for your future.

It’s a great concept, but in a few places, Bach carries it too far. In one chapter, Bach advocates setting up a situation with a mortgage handler so that you pay them every two weeks instead of monthly in order to automatically make an extra payment every year. Unfortunately, this process often costs you a little fee each time that, when added up, removes most of the benefit of doing this. Instead of doing his plan, just do the monthly automated payment, then open a savings account and automatically put 10% of a payment each month into that second savings account. At the end of the year, empty out that account and use it as an extra payment on your mortgage. Not only are you still using the “automate it” philosophy, you don’t have to pay nonsensical fees for it.

There is very little content in The Automatic Millionaire that isn’t in Smart Couples Finish Rich. The latter book is simply a better book: there’s much more content in terms of getting your finances straight, and almost all of the concepts that I’ve talked about this week are in it.

In short, don’t buy The Automatic Millionaire; if you’re considering buying it, get Smart Couples Finish Rich instead (I’ve heard similarly good things about Smart Women Finish Rich, though I have yet to read it). The only reason I can see to buy The Automatic Millionaire is if you want a very simple and quick read, because anyone could finish this book in a couple of hours. However, in going for brevity, you’re missing out on a lot of good information.

To be sure, I’m not condemning the book’s content at all, merely expressing disappointment that it’s so derivative. Bach’s earlier book was substantially better in every way; this one is sorely lacking compared to it, containing just a subset of the material with very little new thinking.

I originally reviewed The Automatic Millionaire in five parts, which you can find

The Automatic Millionaire is the thirteenth of fifty-two books in The Simple Dollar’s series 52 Personal Finance Books in 52 Weeks.