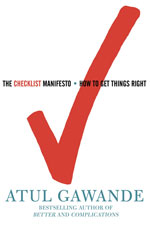 Every once in a while, a book I read for personal enjoyment becomes a book reviewed on The Simple Dollar. This is one of those times.

I thoroughly enjoyed Atul Gawande’s first two books, Better and Complications. Both offered great insight into the difficult professional choices of a surgeon while also offering a good handful of useful insights to anyone who works in a challenging field.

I expected more of those types of insights from this, Gawande’s third book. Instead, it went beyond that, becoming instead a strong personal productivity and personal excellence book. The Checklist Manifesto: How to Get Things Right focuses on the power of using checklists to ensure that you bring complicated projects to fruition as well as constantly remind yourself of the many things you need to do as part of your routine.

The Problem of Extreme Complexity
First, it should be mentioned that Gawande spends most of his time in this book – and in his other books – using his surgical experiences as a metaphor for elements in the lives of most people: technically challenging careers, overstuffed personal lives, and so on. Here, Gawande’s focus is on the fact that many of us have many complicated routines in our lives – in his case, very complex ones. Because of the complexity of our lives and of those routines, it’s incredibly easy for us to sometimes miss a step, with disastrous consequences.

I’ll use myself for an example. I have a morning routine with a lot of steps in it, from my own personal hygiene to processing my inboxes to taking care of my children. On a typical morning, it can be easy to overlook a step. Did I take my synthroid? Did I remember to put the right kind of training pants on my daughter? Did I make sure that their teeth were brushed? Did I get my notes from last night into my inbox? Did I put on deodorant *sniff*?

The Checklist
Gawande’s solution is simple: a checklist for all such complicated routines. Interestingly, Gawande mostly focuses on the negative perceptions that checklists sometimes have, mostly in that you’re “dumb” if you need one and that technically competent people shouldn’t need one. Gawande’s argument is that people generally find themselves in challenging positions no matter their personal skill level and that checklists help anyone who finds themselves in such a challenging position (and frankly, that’s most of us). They’re a cognitive net that defends us against failure, to paraphrase Gawande.

The End of the Master Builder
Checklists don’t help us with every type of complicated problem, however. You can’t checklist creativity, nor can you checklist problems that crop up along the way. However, virtually none of us sit around and do purely creative work. Our creative work is merely one element of a larger routine, one that is often comprised of a lot of steps. Take writing an article, for example. Yes, there is a big creative burst (the idea for an article) and a lot of smaller ones (words and phrases) along the way, but the process is actually pretty structured – core idea, research, structuring of sub-ideas, first draft, revision, second draft, and so on. Not only is it not all that arcane, but that structure is sharable in that others can see and follow that same routine.

The Idea
The entire purpose of a checklist is to reduce the number of uncertainties in a complex procedure. The more complex a procedure is, the more uncertainties it has because each element relies on a host of other elements being correct. Checklists serve as a way to make sure that the relied-upon elements are all in place. I particularly enjoyed one element of the chapter, which focused on the “rider” that the rock band Van Halen used when touring in the 1980s. A “rider” is more or less a checklist – it specifies the technical requirements that need to be in place for the band’s show (lighting, instruments, stage, etc.). One element their rider included was a requirement that a bowl of M&Ms be backstage in the dressing room – with all of the brown M&Ms removed. Why? When the group arrived, they could go backstage and look for the M&M bowl. If they found brown M&Ms in the bowl, they’d know that the checklist wasn’t being followed to the letter and they’d have to go through and check everything themselves because there was a lack of attention to detail. (Maybe sometimes over-the-top rock star behavior makes more sense than you think!)

The First Try
Here, Gawande outlines his first attempt at using checklists in his technical work, discovering that an overly-detailed checklist can result in uselessness. While developing a checklist for pre-surgical routines, Gawande kept adding details to the list until every base was covered. The only problem is that the checklist became simply too unwieldy to actually use and was discarded in less than a day. Why? The checklist was getting in the way of actually getting things done.

The Checklist Factory
What’s the solution to that problem? Gawande found the answer while visiting with members of the airline industry. Rather than having one or two mega-checklists, they had scores of smaller ones to handle specific situations. They kept them all in a well-organized book with tabs making them easy to find. When a particular situation came up, they had a short checklist in that book to tell them how to handle it, ensuring that key steps of key procedures weren’t forgotten.

The Test
What happened as Gawande attempted to apply this at work is that it moved a lot of the thinking for various specific routines up front. By having a usable checklist to apply to a certain task, the user’s brainspace was free in that moment to make sure that the little task was done correctly instead of having to store the “next steps” in their head. If this sounds like it ties in very well to Getting Things Done, you’re right.

The Hero in the Age of Checklists
What about the idea of the “hero” who swoops in and solves a problem, seemingly without effort? Today’s “hero” is smart enough to realize that success doesn’t always come from just repeating the same checklist over and over again. Instead, great success often comes from analyzing the checklist itself and occasionally revising the plan to meet new conditions. Review is well-rewarded in that it can result in more efficient and more fruitful checklists.

The Save
In the end, though, checklists succeed because they help you find big problems that you might have otherwise overlooked due to your own sense of familiarity with the situation. When we become intimately familiar with a routine, it’s very easy to overlook a certain step or two – and those steps can be critical ones in the process. I like to think of this in terms of preparing a meal. More than once, I’ve ruined a meal because I overlooked the usefulness of simply getting the ingredients out and ready beforehand. When something’s in the skillet and you’ve found that the vegetables you need to add aren’t prepped, you’re probably going to ruin that meal.

The Checklist Manifesto stands out for the simple reason that the conclusions drawn in the book lead you to some actionable things in your life. There are many, many places where a checklist can be useful in your life, from your morning routine to the details of a complicated professional procedure to elements of Getting Things Done.

This book has already caused me to do some things differently in my own life, mostly in terms of making some checklists for a few routine things that I sometimes mess up. I don’t know of a higher compliment to pay a book than that.