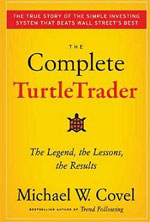 This is an interesting mix of a book. On one hand, it’s something of a book on how to “beat” the stock market, identifying a set of rules for investing that Richard Dennis and a group of his students used for incredible investing success in the 1970s, 1980s, and 1990s. On the other hand, it’s also something of an oral history of many elements of the investing world at that time (and up to today).

To put it simply, I found Michael Covel’s The Complete TurtleTrader interesting in a way that many personal finance books fail to do. It was the story that hooked me, not so much the investment advice.

Nature Versus Nurture
The book starts by relating an idea held by Richard Dennis, a very successful Chicago commodities trader in the early 1980s, that he could teach the ideas he’d developed to almost anyone and that they would become very successful traders in their own right. In reality, this is something of a question of nature versus nurture: is someone naturally gifted at something like successful stock trading, or do they learn it?

Prince of the Pit
This section is a biography of Dennis, laying out how he came from a relatively poor background to be a great commodities trader. The impression I got from this story is that he was someone with diverse interests and a keen ability for noticing patterns, the latter of which led to his great success.

The Turtles
How did he decide who to teach? He gave out an open invitation to anyone who wanted to try, then filtered them with a questionnaire and interviews. Essentially, Dennis wanted people with a high math aptitude and a willingness to take on reasonable risk (but not unreasonable risk).

The Philosophy
This section, and the one that follows it, outlines the basic investing philosophy he taught. The basic procedure behind all of it is the scientific procedure – question, hypothesis, testing, conclusion, and repeat. As long as you keep asking questions and come up with sensible tests to determine if your hypothetical answers to those questions are true, you’ll end up doing well in investing.

The Rules
In essence, all the Turtles cared about were the numbers. They largely ignored the news media and essentially focused on a form of technical analysis of the stock market, where they look for lows and highs and make trades in response to those.

In the Womb
The Turtles were given a (relatively) small fund to invest with and largely failed at first. Their motivation to keep going came from watching Dennis use the exact same principles and succeed. What was the difference? A honed eye for what trends to actually jump on board with.

Who Got What to Trade
Eventually, the students began to get very good at the system. Over time, a few of them began to notice flaws in the system, particularly one that exposed everything to too much risk. Dennis, largely because he’d been so successful during the bull market of the 1980s, seemingly blew off this result.

Game Over
Of course, blowing off things like that has consequences. When the stock market turned into a bear in late 1987 and early 1988, Dennis took on some major losses (a 55% loss in one month, for instance) and decided to quit the investing game, largely ending the Turtle program.

Out on Their Own
Many of the Turtles, having gotten their feet very wet in investing, chose to keep going. Some of them were hired by other investment houses. Others joined in the nascent hedge fund movement. A few just stopped being involved at all. One of them sold everything he knew.

Dennis Comes Back to the Game
Eventually, Dennis returned to trading in the 1990s and had a spectacular run. By the end of the decade, though, he crashed into the same dot-com bubble collapse that many other traders fell into and his fund closed. Of course, if he had continued following his rules into the subsequent decade, he would have seen years with a 100% return. It seems that the system he uses both exaggerates gains and losses – you can have crazy years on both sides of the coin.

Seizing Opportunity
Over time, some of the Turtles succeeded incredibly well, with a few even exceeding the original success of Dennis. Others failed miserably and stopped investing. Nature or nurture? Clearly, the system works to some extent, but there’s also a huge amount of influence from the character and personality of the investor, too.

Failure Is a Choice
Do some people choose to fail? Some of the failures happened because of issues outside of trading, such as personal character flaws. Some were just crooked people and the law caught up to them. Others were simply poor judges of character. In each case, a person made decisions that pulled the rug of success out from underneath them.

Second-Generation Turtles
Interestingly, there are quite a handful of successful “second generation” Turtles, people who learned from the original group of students. This seems to be an indication that the system works quite well if it’s matched to the right person. Of course, I think that’s true of almost any investment system.

Model Greatness
The one big philosophical question this book raises is whether or not you can duplicate and model the things that make for runaway success. I think, in a limited scope, you can, but after a while, the element that makes it exceptional becomes commonplace. The thing you can’t model is that initial spark that causes someone to break out of the mold, and there’s a lot of serendipity to being there at the right moment when that type of event happens. You can duplicate the path of successful startups to a certain extent, like HP, but you can’t duplicate Bill and Dave in a garage.

Is The Complete TurtleTrader Worth Reading?
I don’t think that The Complete TurtleTrader is a book you want to read if you’re focused on nothing but strategies for earning more money. The rules set out in the book for investing are sensible, but they’ve been so incorporated into the models of hedge funds and Wall Street that you really can’t get an edge with them at this point.

Here’s the truth: whenever some investor begins to beat Wall Street regularly, it doesn’t take long for others to start figuring out what he’s doing and doing it themselves. This causes the advantage to disappear.

Instead, what’s interesting and valuable about this book is a look at how someone discovered that edge, how he taught it to others, and how the cat got out of the bag. The Complete TurtleTrader succeeds greatly as a fascinating and enjoyable story about investing, one that you might not get a ton of actionable investment advice from, but one that you’ll enjoy reading as a page turner.

Check out additional reviews and notes of The Complete TurtleTrader on Amazon.com.

Loading Disqus Comments ...
Latest from Trent
4 Surprising Steps to Achieve Your Long-Term Financial Goals
Why You Should Try Microsoft’s New “Money in Excel”
How to Make Money From Your Hobbies
Read more from Trent
Featured on: