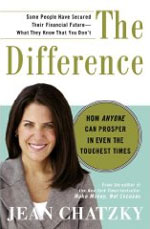 I really enjoy books like The Millionaire Next Door – books that focus on addressing the more interesting differences between people who achieve financial success and those who do not. What I particularly enjoy is how they often wind up mostly hammering on the reader’s preconception of what “success” means.

The Difference (by Jean Chatzky) basically follows that same pattern. Rather than talking about the how-tos of organizing your money, Chatzky instead does a wide survey of people who have moved from a low financial status to a high financial status. What traits do those people have in common? What behaviors do they share?

On a personal level, the topic really intrigues me, simply because my wife and I are in substantially better financial shape than my parents were at an equivalent age. Does Chatzky’s conclusions on the behaviors that upwardly-mobile individuals share match with my own behaviors? Are there ideas that are way out of whack? Are there good ideas that I can adopt?

Let’s dig in and see what she has to say.

Meet the Neighbors
To provide the backbone for this book, Chatzky worked with Harris Interactive and Merrill Lynch on a poll distributed to more than five thousand people. The poll covered lots of factors: non-financial behaviors, financial attitudes and behaviors, life goals, and personality. Based on the poll’s results, the group was able to identify four distinct groups: the wealthy (3% of respondents), the financially comfortable (27% of respondents and the group I’d probably put myself in), the paycheck-to-paychecks (54%), and the further-in-debtors (15%, and the place where I started on my financial journey). From this group, Chatzky sliced out 620 respondents of interest – those who had gone from the bottom group to one of the top two groups.

Choosing the Difference
What separates that 10% that climbed up from everyone else? More than anything else, the “difference” is ambition – the ability to set goals and to work towards them. Can you set a realistic, clearly defined goal? Can you identify steps to take you from where you are to that goal? More importantly, can you actually make yourself take these steps toward success? I discuss goals a lot, and I can say from experience that setting goals and stepping up to the plate to actually work towards making them happen has made a huge difference in our lives.

Do I Have to Be a Rocket Scientist or a PhD?
No, you don’t. Intelligence actually has little impact on your earning potential. The key difference is education – and the biggest element to getting a good education is hard work. Obviously, people with high intelligence can work less to get that education, but in the end, it’s the education that matters in terms of lifetime earnings, not the intelligence behind it. A formal education is just a part of it, though – learning from life experiences is also vital, as is reading every day and striving to learn something new every day. An active mind is one that succeeds in increasing one’s earnings.

Ding, Dong, Your Passion Is Calling
Guess what? The people defined by the survey as financially comfortable or wealthy are much, much more likely to be happy with and truly enjoy what they do for a living than people living paycheck-to-paycheck or sinking in debt. What gets you there? Either you need to find out what you’re passionate about or get passionate about what you’re doing. Chatzky offers an armload of suggestions for both sides of the coin.

Get Happy (But Not Too Happy)
What does that mean? Here, Chatzky goes the extra mile to distinguish between happiness with your current state and optimism about the future. The best state to be in if you’re striving to improve your state is to be only moderately happy about where you are, but be optimistic about what the future holds. In that state, you’re drawn to work hard, because you see a bright future in front of you, one that’s brighter than the state you’re currently in. Of course, overoptimism is bad, too, because then you believe that you’re constantly headed towards a pot of gold. Your optimism should reside in your own ability to create a great future.

In Praise of the Do-Over
You don’t have to spend your whole life doing what you’re doing now. In fact, people who make the leap described in the first chapter often have at least one “do-over” in their life. Of course, that “do-over” usually begins with failure, and people that succeed are the ones that deal appropriately with that failure. Do they learn something from the failure, pick themselves up, and try again? Or do they wallow in that failure, never trying for the brass ring again? You will fail, so you have to be resilient against that failure.

Taking Risks That Make Sense
Some people play it very safe, taking no risks. They stay quiet at work, choose only conservative investments, and never rock the boat. Other people take huge risks all the time – and their lives are often filled with magnificent flameouts. There’s a balance in the middle there that people find where success resides. They take risks (in life and in money), but those risks are usually backed up with a contingency plan. They make career switches, but not without a big emergency fund. They invest in stocks, but only with a large investment timeframe. Most importantly, they do this often enough that they begin to develop an intuition of sorts that points them in good directions.

The Kevin Bacon Principle
Another key difference is networking. People who are upwardly financially mobile spend significantly more time networking with others and communicating with them routinely (a 1988 study estimated that such people spend 70% more time networking than others). Even more interesting: the wealthy and financially comfortable are more likely to socialize with people at all financial levels, whereas people from lower financial strata tend to avoid people from higher strata, socializing only with people from their own family. What can you do? Seek opportunities to socialize in the wider community. Attend public events. Join social groups. Talk to everyone there, whether they intimidate you or not (

fake it ’til you make it, after all). Eventually, the intimidation will wear off and you’ll begin to build some surprising connections – and some very useful ones as well.

Grazie
Pay it forward. Show gratitude to those who help you. Give as much as you can. Does that sound like you? Chatzky’s survey indicates that it’s much more likely to be true for people who are wealthy or financially comfortable than for those who are not. Selfishness tends to actually be linked to lower financial status. What can you do? Be more open with sharing your time and ideas – and, yes, your money. Get involved in projects that benefit the community at large. Help others when you can, and when people help you, show gratitude. There’s no better way to build a positive reputation.

Working Hard and Working Smart
The message here is straightforward – if you want it, work hard for it, but also make sure you’ve got a good game plan to get there. The piece of advice that struck me, though, was the suggestion to compete against yourself first. Can you do better than you’ve already done? Can you top your last achievement? Use yourself as the benchmark, not others around you. You’re the only person that it’s fair to compare against, because your attributes remain the same. Competing against yourself pushes you and makes you better.

The Healing Power of Saving
Save automatically. Save habitually. Save as much as you reasonably can. Spending less than you earn is a constant mantra among those who are financially successful. The interesting piece of the equation, though, is how your life changes when you begin to save and begin to store up some real money in the bank. You become less worried about paying the bills. You begin to see big possibilities in life. You begin to feel like anything is possible. It’s truly life changing – and I speak from experience here.

Make Your Money Work for You
The final chapter of the book seems to have been added later, after the rest of the book was complete, to address the recent downturn in the stock market. Chatzky’s advice is pretty simple, borrowed straight from Warren Buffett: “Be fearful when others are greedy, and be greedy when others are fearful.” In other words, she views the 2008-09 economic downturn as an opportunity to invest, not an opportunity to hide.

First of all, there’s a lot more actionable, tangible advice in The Difference. Chatzky provides a lot of action for engaged people to take. Second, the focus on the upwardly mobile instead of merely on people who are millionaires changes the tone quite a bit. Many of the anecdotes in the book come from younger people than the anecdotes in The Millionaire Next Door.

I felt, in the end, that The Millionaire Next Door provided more food for thought, but The Difference provided more actionable content and more connection to my life right now. I think they’re both well worth reading.