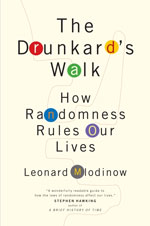 One of the key points in my book The Simple Dollar is that our lives are far more random than we think and that we compensate for that randomness in the wrong way. We should spend less, not more. We should save up money so we’re not at risk from the many things that can happen. The more protection we have against the randomness of life, the easier it is to make freeing decisions, like switching careers or being a stay-at-home parent.

Since my book was released, several people have emailed me suggesting I take a look at Leonard Mlodinow’s The Drunkard’s Walk. According to them, it does a brilliant job of outlining how much randomness goes on in our day-to-day lives that we barely perceive.

Sure enough, the book’s subtitle is How Randomness Rules Our Lives. Let’s dig in and see how well Mlodinow makes the case for emergency funds.

1 | Peering through the Eyepiece of Randomness
The book opens by telling a number of tales that basically argue that randomness sometimes works in our favor and sometimes does not, but it often has an incredible impact on our life, particularly in specific events. My favorite example from this chapter is that of Roger Maris. Mlodinow retells the story of Maris’s 1961 baseball season, in which he broke Babe Ruth’s single season home run record. This season was a huge outlier for Maris – he never again even hit 40 home runs, and he had never approached Ruth’s record before then, either. How did he do it? Probability theory simply says that a few coin flips went his way that season, enough to add up to his normal output (35 or so) arching all the way up to 61. (Mlodinow has examples of luck turning the other way, too.)

2 | The Laws of Truths and Half-Truths
The problem with such randomness is that, as humans, we try to see patterns in everything, but often there aren’t really any patterns at all. We try to explain away Maris’s season by saying he was later hobbled by injuries, but that wasn’t really true. We try to explain away unexpected scientific results by claiming there were errors in the procedure, but sometimes that’s not true, either. The only way to truly minimize randomness is through repetition – the more tests you run, the more clear outliers typically become. In other words, if you work at one job and get fired for poor performance, it might be a fluke. If you do it ten times, it’s probably not a fluke.

3 | Finding Your Way through a Space of Possibilities
The trick then becomes figuring out how to navigate all of these possibilities. If every event in your life is essentially random, how can you even manage to get out of bed in the morning? The trick is to realize, of course, that we act on a ton of assumptions just to get through our day-to-day lives. Mlodinow offers quite a few examples of various assumptions in this chapter, but the idea is clear when you think about even getting out of bed in the morning. You’re resting on probabilities from the second you open your eyes.

4 | Tracking the Pathways to Success
Success is often the result of a lot of probabilities turning out well. We’ve all heard the old maxim of fortune favoring the prepared. Well, preparation is mostly just methods for turning the odds slightly more in your favor. The more preparation you do, the more likely you are to find a pathway that leads to the success that you want.

5 | The Dueling Laws of Large and Small Numbers
The real danger is making assumptions based on a small number of events. For example, if a teenage boy decides that it’s safe to jump out of a third story window because he didn’t break a bone the first time he did it, that’s a mistake. Similarly, to decide that the world is out to “get” you because you didn’t get the first job you applied for is a similar mistake on the other end. Unless there are significant drawbacks to repetition (like the potential for seriously hurting yourself), you’re better off trying things multiple times.

6 | False Positives and Positive Failures
What do you do about “false positives” – a single test that gives an incorrect result? Usually, the best move is to have multiple tests done (provided, of course, that you actually want the right answer). You also need to make sure that you’re not looking at it incorrectly, and Mlodinow gives several examples of how such mistakes can completely wreck one’s plans. One example that stuck in my head is Bayesian statistics, or that the likelihood of event B occurring if event A occurs is probably different than event A occurring if event B occurs. In other words, everything in our world isn’t a strict cause-and-effect relationship, even though we sometimes interpret it to be that way.

7 | Measurement and the Law of Errors
Another problem comes in with regards to how we measure results. If we measure them incorrectly, we have a different way of introducing the unexpected into our lives. For example, if you read someone’s facial response incorrectly, you’re likely to make a big social mistake. Of course, what if that person has unusual facial mannerisms or is thinking about something else when they give you that expression? Measurement errors are just another way in which probability and randomness alters our lives.

8 | The Order in Chaos
It might seem that with so many probabilistic events going on that our lives should just be utterly chaotic – and they are. What happens, though, is that our minds are really good at making all of this chaos seem orderly to us. We see big patterns in all of this chaos in our lives and we interpret it as meaning things are orderly. Part of this is hinged on a lot of events in our lives happening with a very high probability (like, the odds we won’t trip and fall with our next step), which makes us think that our lives really are predictable when so many events aren’t.

9 | Billions of Patterns and Patterns of Billions
The big problem is that there are so many events and patterns going on that our minds can’t effectively process all of them, so we instead just see the easiest pattern we can see, whether it’s the right pattern or if there even is a pattern. The net effect of all of these assumptions is that we see a life much more orderly than it really is – and we often treat it as far too orderly when we make life decisions.

10 | The Drunkard’s Walk
One big danger, the one that closes the book here, is that hindsight is 20/20 and we often make judgments about today based on our recollections of yesterday. The problem is that we have far more information about yesterday’s choice than we do about today. We see someone making a decision yesterday based on limited information and when it turns out to be bad, we think of them as being poor decision makers. The truth is we all stumble through life with bad decisions, bad observations, and big mistakes.

Is The Drunkard’s Walk Worth Reading?
The Drunkard’s Walk does a powerful job of clarifying how random our lives really are. It was a thoroughly enjoyable read as well, something that “pop science” books don’t quite pull off on occasion.

Why is it useful, though? If you take the case that the book makes to evaluate your own life, you’ll come to some very strong conclusions. An emergency fund will seem far more useful, as will tangible investments, such as land and food reserves.

The interesting part is where that takes you. If you find yourself in a position that’s more secure from things like job loss and economic downturns, you’re also in a position that’s more secure from the downside of things like switching careers, moving to another country, being a stay-at-home parent, or whatever it is you dream about. Protecting yourself against the drunkard’s walk also secures a great deal of freedom in your life.

Read it. Think about it. You might find yourself going down the same intellectual road that I followed.