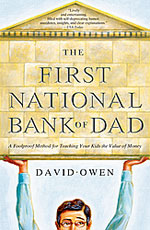 One of the most consistent worries I have is about how I will educate my children to not make the same financial mistakes I made. How can I imprint good financial decision making on their minds as they grow up in a rather material world? The First National Bank of Dad focuses on this very topic in a very engaging, well written fashion (David Owen, the author, is a staff writer for The New Yorker).

Owen speaks about his experience with his own children, where he observed that they tended to be very cavalier with money that wasn’t theirs, but much more careful with money that was their own. Purchasing decisions became much more serious if their own allowance money was involved, for example. So Owen took advantage of this basic human nature and set up a “Bank of Dad,” where they could safely put their allowance money and earn a very nice return on it. The First National Bank of Dad is all about this “Bank of Dad” plan: how it worked and how the children reacted to it.

Naturally, I was deeply intrigued by this concept, so I read this book in two sittings. Did the concepts inside make sense, or were they just high on concept and low on execution? Let’s take a look.

1. Children and Money: An Introduction
In trying to instill financial wisdom in their children, parents often make a few key mistakes. First, they don’t entrust their children with large sums of money – they allow them to keep the small amounts (the $5 bill) but put away the larger amounts (the $100 check). This teaches kids that money should either be spent immediately or put away in a desk somewhere. Second, we think that getting them a savings account will teach them to save, but it’s pretty hard to impress a child with annual returns when a year seems like an eternity to a child.

These lessons, which seem sensible at first, actually teach children some pretty questionable values about money. If they have money, for example, they should just go blow it, and also that they shouldn’t be trusted with money. When you teach a child to ride a bike, you start off with a tricycle and then move on to training wheels, then eventually they go on their own – and we coach and help them every step of the way. Under this money philosophy, though, we hand them the tricycle, take the bike, and then never bother to show them how to ride it well.

2. The First National Bank of Dad
When I was a kid, the idea of putting money in the bank was incredibly boring. The biggest reason was that the rate of return was slower than molasses – a year seemed like forever to me then and thus waiting a year for $100 to earn $2 more was unbearable – why not just spend the money now? This made me not want to save – it made me annoyed by it because my parents would make me save anyway. I had a similar feeling about my piggy bank.

So how can you make it so that children want to save? You have to speed up the compounding to the point where they can see the benefit. Owen opened up “The First National Bank of Dad” for his children and invited them to deposit their money. He would pay them a rate of return of 5% a month – enough for them to grasp the idea. If they gave him $20 and let him hold it for a month, it would earn $1. They could also withdraw at any time. Owen managed all of this in Quicken.

If my parents had offered me that, I would have jumped all over it, and Owen’s kids certainly did. On allowance day, they’d usually hand it right back – depositing it in the Bank of Dad – and he’d give them monthly statements on their money.

3. Responsibility and Control
This “Bank of Dad” system creates a situation where children now feel a sense of responsibility for their money. It also enables parents to have a sense of control over situations where their children have a strong temporary desire for an object in a store, for example. It does require firmness, but the “Bank of Dad” account allows them to manage their own money and make their own choices about what to spend it on.

One interesting point is that Owen suggests that all gift money goes into this account. His argument is that the benefits of having the children learn responsibility over their money is more important than any potential bad moves they may make. I strongly agree with this – when my parents would “put away” money for me, I would just shrug my shoulders and forget about it and then it would magically reappear later. In other words, I didn’t learn much at all from the experience.

4. Allowances
This chapter on allowances was probably the most thought-provoking piece of the whole book. First of all, Owen argues that children should be heavily involved in the process of deciding how much allowance they should receive. For starters, you should ask them how much they think they should receive and then, after that, when they want an increase, they ask for it in writing and enumerate the reasons (encouraging them to write in an organized fashion).

He also argues that requiring children to save some portion of their allowance or to give away some portion to charity is meaningless – such saving and giving doesn’t mean anything unless they make the decision themselves, which makes a lot of sense. Owen also says after-school jobs is a poor idea (they should focus on studies) and that a child should get a debit card pretty early on – for his children, age twelve (it teaches responsibility with plastic in a safe environment). There’s really a lot of interesting discussing in this chapter, well worth reading if you’re a parent and thinking about allowances.

5. Beanie Baby Economics
At some point during childhood, almost everyone collects something. I collected baseball cards and later Magic: the Gathering. My wife collected

Breyer horses. We would attribute a value to these collections, but it was a value that used to be hard to extract.

No more. With the advent of the internet, a child can liquidate their collection rather easily, so collecting can often transform into a way for children to experiment in how a free market works. They can actually utilize resources like eBay to easily buy, trade, and sell their collections, which means that the “foolishness” of collecting in our childhood isn’t nearly as foolish now – instead, it can actually be educational.

6. The Dad Stock Exchange
What about teaching children about investing in stocks? In order to teach that, Owen set up a brokerage at the “Bank of Dad.” This brokerage basically exists as a virtual version of a brokerage – the children could buy any individual stock or any common index at any time and then sell them at any time, too.

Doing this encourages kids to take an interest in the stock market. Owen discusses how his own children began poring over the business news and learning more about investments. It provided a relatively safe environment for mistakes, but provided great rewards for good choices, too.

7. True Net Worth
After all this talk about teaching financial values to your children, the book steps back here and focuses on the bigger picture. What’s really important in your life? What are the things that really have value? Money is just a tool to maximize the things that are important – and generally the important things aren’t materialistic at all.

I like the anecdote told here about his daughter as she started to approach college age. She watched her friends get involved in all sorts of resume-padding activities that they didn’t enjoy – they participated at the urging of adults who convinced them that if they didn’t act like some generic “super-student” model, they’d never succeed. She rejected all that and followed her own muse. What happened? Success. I found the same thing was true for me, but in a somewhat different way – my parents had no idea how I should apply for college, so I followed my own muse and it led me well. Don’t pressure kids to make the choices you’d make, but instead encourage them to work hard at what they’re naturally passionate about. Everything else will follow.

9. The Ultimate Payoff
The ultimate payoff comes when we grow older, our children grow up, and they are there when we need a helping hand in the twilight of our lives. If we’ve raised our children well, with a sense of how to manage their money and the maturity and emotional intelligence to hold your hand as you take the final steps of your life. It’s an ongoing cycle of life, and the love and care you take in raising your children will pay you back for the rest of your life, in their love and in the love they share with their own children and the others in their lives.

The First National Bank of Dad is filled with a whole pile of compelling concepts on techniques for educating children about how money works. While I am not sure I would be willing to commit entirely to the whole “Bank of Dad” concept with my children, the concepts in here are very much worth exploring.

If you have a child and are interested in raising them with sound ideas about money, this book is highly worth reading. Besides the big ideas, there are tons of little ideas, concepts, and pieces that you can apply directly to your own children.

Perhaps best of all, this book made me seriously reconsider some of my assumptions – and realize that maybe they weren’t good assumptions after all. Books that can do this and are backed by reason and logic are powerful ones, indeed.

The First National Bank of Dad is the forty-sixth of fifty-two books in The Simple Dollar’s series 52 Personal Finance Books in 52 Weeks.