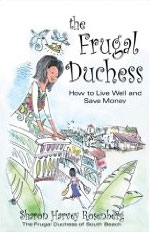 It fills a special warm place in my heart when a fellow blogger, one of the first people to take an interest in The Simple Dollar and someone that I’ve communicated with pretty regularly over the past two years, gets a book published. It’s even better when that book is about frugality and the tone is witty, light, and humorous throughout.

The Frugal Duchess, by Sharon Harvey Rosenberg (of the blog of the same name) was a lot of fun to read, with a very down-to-earth tone and a fair amount of humor – just as I’ve come to expect from her blog and from her other writings.

That’s all well and fine, of course, but does it actually contain a lot of good information and tips on frugal living? Let’s dig in and find out.

A Dip Into The Frugal Duchess
As this book is actually broken up into a ton of very brief chapters, I’ll toss aside my usual review format and instead dig through the book and pull out twelve of my favorite frugal tips from the book.

Use organic cider vinegar as a hair conditioner. (p. 11) I tried it and this actually worked really well. It worked so well, in fact, that I’m considering filling up my conditioner bottle with it. Only one minor tip, though – you have to rinse really well if you use it.

Most “sales” are scams. (p. 35) Rosenberg runs the numbers on a lot of different kinds of sales tactics (like “buy one, get one half off”) and comes up with one conclusion: don’t bother with sales unless you’re going there to make a specific purchase and you know in advance what it is.

If you work a second job, segregate that pay. (p. 59) Instead of just having it all run together in your main checking account, put the cash from a second job directly into a savings account and do your day-to-day living from your primary job. Then, you can let that cash from the second job just build up into an emergency fund, a car down payment, a house down payment, or whatever else you need.

Get your “first furnishings” from a hotel. (p. 66) One great way to furnish your home is to buy from a hotel liquidation sale, where a hotel is either going out of business or massively changing the look and feel of the interior. You can often get stupendous deals on quality, sturdy furniture this way. Such sales are usually advertised in newspapers, so keep an eye out.

Don’t give a gift holiday basket; make your own. (p. 81) If you actually consider what you’re getting in most gift baskets, it’s not really much of a bargain – most of the stuff isn’t really wanted, anyway. Instead, buy your own basket and fill it with some homemade things and maybe a few small thoughtful items. It’s far cheaper and will mean a lot more.

Use a one-in, one-out policy. (p. 83) For every new item you buy or gift you receive, one item of yours has to be sold or given away. This encourages people to be very careful about the things they might buy – and also provides a great opportunity at Christmas to give things away to charity.

Don’t pay for plants for your garden. (p. 89) Stick with heirlooms, save your own seeds from year to year, and harvest seeds from interesting plants you discover. You can also often trade seeds with other frugal gardeners – gardening clubs can be a blast.

Get unlimited free soda at Disney World. (p. 99) For some reason, this one just tickled my fancy. Go to the Cool Club exhibit at the Future World section of Epcot and find the soda fountain exhibit. Grab a paper cup and taste away – there are tons of sodas to sample and they’re free.

Don’t bother with internet cafes when traveling. (p. 102) Instead, seek out local libraries. Another good tactic: find businesses that offer free wi-fi. I haven’t paid for net access on the road in years.

Use WD-40 to remove crayon from walls. (p. 109) Wow, does this work! I wasted a lot of cleaning supplies and effort getting some crayon marks off the walls around here. Two little squirts of WD-40 and a dishrag took care of the same problem with much less wasted material and time.

Dressing frugally keeps you safer. (p. 137) While flashy accessories might look good, they also look like money to potential muggers. When you’re out and about in a city environment, especially later at night, dress simply and conservatively (and thus much more cheaply) – and don’t keep a lot of cash on you, either, as that reduces splurging temptation and also means you have less to potentially lose.

Make a low-cost arts and crafts project the centerpiece of a child’s birthday party. (p. 184) Rosenberg tells an anecdote about getting door hangers (like a “do not disturb” sign) in a package of six for $2 and then getting a few other materials for decorating them – and these became a big centerpiece for a girl’s birthday party. Each guest decorated one and it occupied them for hours, plus gave them something to take home as a memento.

This book is like the bizarro world version of You’re So Money. The target audience seems mostly identical – professional women with some modicum of self-control and an intelligent head on their shoulders. Yet the advice given comes from such a vastly different angle. Rosenberg repeatedly taps into the idea that frugality is cool – not something to be disdained – and she places it in a personal and family context. The other book, which I criticized for this very reason, largely acts as if frugality is a waste of time and seems to accept consumerism as the norm – that book’s strength is in investing and money management.

There’s more pop culture references here than in any personal finance book I think I’ve read. I find them humorous and also find that they make ideas in the book more relatable. The only problem is that it can date the material – this book might come off as really stale in ten years because of the references. For now, though, it’s quite fun.

The overarching themes of the book definitely point towards living in a city. There are a lot of good suggestions here that simply don’t apply to me, as I live in a highly rural area (not all of it, mind you, but most of it). This is often a frugal guide for city folk.

Is The Frugal Duchess Worth Reading?
I’m not entirely in the book’s target audience. When I was reading it, I kept thinking that this book really would have fit my wife well just before we were married – she was in her mid-twenties with some strong family values, a good head on her shoulders about most things, a strong pop culture sensibility, but lacking some good decision making when it comes to money.

The Frugal Duchess does the best job I’ve yet read of getting across the idea of frugality (and a lot of specific tips, too) to a younger, pre-family audience without entirely abandoning the older family-oriented folks, either. Most books that really hit well with a younger audience avoid the concept of frugality entirely – Rosenberg doesn’t shy away from it a bit and instead wears it as a badge of honor.

I probably would have marketed the book slightly differently, but if you can convince someone to open the cover and pay attention to what Rosenberg has to say here, it could make a world of difference.