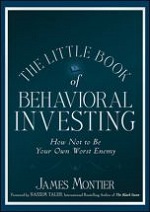 If you’ve been reading The Simple Dollar for a while, you know that I love the “Little Book” series by Wiley Publishing. It’s a book series of small, relatively short hardbacks with about twenty short chapters. Each book in the series focuses on a specific personal finance or investment topic, striving to spell it out in plain English. Often, it’s written by a leader in the field, particularly by someone who believes deeply in the methodology being described. Almost unanimously, the entries in the series have been well worth reading, particularly if you have even a minimal interest in investing. The books do a fantastic job of breaking down ideas into little, comprehensible nuggets.

The most recent book in the series that I have yet to review (there are actually two more that have been published very recently that I’ve not even laid eyes on yet) is The Little Book of Behavioral Investing by James Montier, a renowned value investor. This entry in the series focuses on how normal human behavior often works against us when it comes to investing, a phenomenon that’s been covered in other personal finance books. Unfortunately, those other books have often been dry ones, often failing to relate the concepts they talk about to your day-to-day behavior.

Does The Little Book of Behavioral Investing succeed where the others fail? Is it a book worth reading? Let’s dig in.

One – In the Heat of the Moment
Poor decisions are made in the heat of the moment. Just think of impulse buying at your local supermarket. Montier proposes, sensibly, that the route to financial success is almost always preparation of and pre-commitment to a detailed, clear plan. Spend some time figuring out exactly what you’re going to do, what your goals are, and what your parameters are before you even dive in. It’s no different than writing a grocery list before you go to the store – you’re curbing impulse buys.

Two – Who’s Afraid of the Big Bad Market?
When people experience financial loss, they often react much in the same way they do when they’re bitten. They retreat. They certainly don’t want to invest more. Yet, quite often, the correct response to a loss in a stock investment is to invest more because you’re essentially paying a sale price on the same exact company that cost quite a bit more just a month ago. If your fundamental gameplan hasn’t changed, don’t react to a downturn by selling – react to it by buying.

Three – Always Look on the Bright Side of Life
On the other hand, when people see a positive trend, they tend to get overoptimistic. They believe that it’ll continue on forever and they dive in like crazy – often when things are hitting their peak. This is why bubbles form – a good investment reaches a reasonable peak, but keeps on going because the blind optimists dive in, driving the price far above what it should be rationally. When the blind optimists then try to sell, there aren’t enough buyers and the price collapses.

Four – Why Does Anyone Listen to These Guys?
Experts are not perfect. Although they might be more knowledgable about the market, they also tend to be overconfident, as they believe that they know more than the other investors. That’s a bad mix that often causes investment experts to do worse than the average person on the street. Overconfidence can completely ruin any advantage that you might have.

Five – The Folly of Forecasting
No one can predict the future, but lots of people certainly try. Unfortunately, past performance is never an indication of future results. The best thing an investor can do is understand where they are right now. Have they met their goals? If you create a plan in advance and stick to it, you don’t have to try to predict the future.

Six – Information Overload
There’s an overabundance of information available for investors. While on one level that can seem like a great thing, the truth is that it can actually be a terrible thing. People can get lost in the data. They can get sucked into “analysis paralysis,” where they won’t take action until they can analyze all the information – and by the time their analysis is done, the situation has changed. The key here is to focus your analysis on very specific elements that you understand.

Seven – Turn Off That Bubblevision
Many people obsess and stress over every little fluctuation in the stock market, and channels like CNBC fuel the obsession. Unfortunately, such obsession often leads to oversensitivity to little fluctuations and thus causes hair-trigger responses that are usually poor. Turn off the bubblevision and seek out real, hard information that matters to you instead.

Eight – See No Evil, Hear No Evil
Most people look for evidence that confirms the ideas they already have (think about talk radio, for example). However, doing that will often be disastrous for your investments. You should instead constantly look for information that disproves your assumptions. If you think a company is successful, for example, you should seek out signs that indicate that it’s not successful.

Nine – In the Land of the Perma-Bear and the Perma-Bull
Some people believe the stock market is always headed in the right direction (“perma-bulls”). Others believe that the stock market is always headed in the wrong direction (“perma-bears”). Obviously, neither one is right and, obviously, neither one of these folks can ever be a truly successful investor. Every market has ups and downs – if you constantly believe one or the other is about to happen regardless of what’s happening now, you’ll always make mistakes.

Ten – The Siren Song of Stories
A good story is incredibly appealing to us because it makes things that seemingly don’t make any sense make, well, sense. We do this all the time – our memories are a perfect example of this. We take random events in our lives and polish them until they make a coherent story. The problem is that with investing, the data rarely tells a simple story like this. When we try to mold it into a simple story, we overlook big parts of the picture and often end up making poor choices. Don’t worry about the story.

Eleven – This Time Is Different
All markets have bubbles – and those bubbles eventually burst. Every time, though, as people are buying in like mad, you hear stories about how this one is different than the rest because of some reason. That’s basically never the case. What happens, inevitably, is that too many people buy in because they believe they’re going to get rich. Suddenly, there are too many people holding the things they’ve bought and no one’s around to buy them. Every time a market begins to seriously diverge from long-established fundamentals, there’s usually a bubble involved and you’re better off avoiding it.

Twelve – Right for the Wrong Reason, or Wrong for the Right Reason
As was mentioned earlier, we tend to gloss over the past to create nice stories about it. That glossing, mixed with our optimism, often results in our blaming others for the mistakes we made in the past. The truth is much harsher: whenever we lose money, we’re at fault, and there are valuable lessons to be learned from figuring out what exactly went wrong.

Thirteen – The Perils of ADHD Investing
If you’re an attentive investor, it’s often tempting to jump in and make changes all the time. We hear some good or bad news and we want to react quickly to it by buying or selling. Unfortunately, our snap decisions are often absorbed right into the market and the only person that makes money is the stockbroker. If you have a plan in place – and you certainly should – stick to that plan. Don’t let a sudden piece of news or a sudden impulse steer you off of that plan.

Fourteen – Inside the Mind of a Lemming
It often can feel very uncomfortable to zig when others are zagging, particularly when we have money at stake. If we see lots of people doing a certain thing, it’s easy to convince ourselves that it must be the right thing to do. The key here is to step back and look at it objectively without the influence of other people. Make your decision based on the information, not on what everyone else is doing.

Fifteen – You Gotta Know When to Fold Them
A big part of your overall plan – remember, the one you decided on before you started investing? – is when to sell. You should decide before you even begin how much volatility you’re willing to accept and how big the losses have to be before you would sell. The decision needs to be made before you even put a dollar in so you can react in accordance with your plan, not in accordance to your nerves.

Sixteen – Process, Process, Process
What does all of this add up to? You need to always be examining the world around you and, most importantly, you need to try to remove the human element from your investing decisions. Come up with a plan, refine the plan, invest, then stick to the plan. Don’t let your nerves or the actions of others get in your way.

A book on behavioral investing should be something that everyone reads before they jump into the investing pool. The Little Book of Behavioral Investing is as good a place as any to pick up that information. It’s approachable, clear, and, dare I say, fun.