Review: The Little Book of Bull Moves in Bear Markets 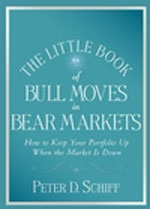 Peter Schiff is a huge pessimist about the future of the economy, and because of that, he’s probably the perfect person to write this book.

The Little Book of Bull Moves in Bear Markets is the seventh in a series of “Little Books” (I have reviewed the other six) that each focus on very specific areas of investing, each one discussing an individual investing strategy in detail, but using layman’s terms to make the book accessible to everyone. In each case, the author of the book outlining the strategy is wholly appropriate – for example, the book focusing on using index funds for investing is written by John Bogle, the founder of Vanguard.

This entry focuses on how to invest in a down market, and Peter Schiff is perhaps the best person out there to write it. Schiff is widely known as a person who is quite pessimistic about the future when it comes to the economy and investing and thus has made a pretty big name for himself during the current downturn. In fact, his negative statements about the market have earned him the sarcastic nickname “Dr. Doom.”

Schiff actually does know what he is talking about, though. He’s the head of Euro Pacific Capital, a brokerage firm that focuses mostly on preparing people for an eventual huge economic downturn that he sees coming. What advice does he have to offer? Let’s dig in and see.

Chapter 1 – Let’s Do the Time Warp Again
Schiff opens the book by making his case that we’re currently in a very desperate economic situation. Most of this is pretty basic stuff to people who have followed the news over the past three months, but Schiff is pretty strong in his negativity, arguing that the United States is actively destroying its own wealth by spending so much of its money on imported goods. It’s an excellent chapter to read if you’ve not heard Schiff’s arguments in the past – he makes a very strong case for a strong financial downturn over the next several years.

Chapter 2 – Saving Your Assets
Obviously, this begs the question, “How can I protect myself against such an economic mess?” Schiff starts with the answers here, and his first tactic is pretty simple: avoid cash and bonds. Schiff tends to believe that hyperinflation is about to happen and makes a lengthy economic case for it (a pretty interesting contrast to

the article I posted this morning talking about deflation), and in that case, he argues that bonds and cash (referring to U.S. dollars) are poor places to keep your money. Instead, his advice is this: if hyperinflation is coming (or has arrived), keep at least some of your money in a money market account made up of non-dollar currencies. He also recommends rare metals.

Chapter 3 – Beware of False Prophets
Interesting, after two chapters of predicting doom, Schiff steps back here and encourages readers not to just blindly accept the words of “prophets” and instead learn for themselves – brilliant advice. He spends much of the chapter deflating the arguments of others, but if you take his main idea of doubting the people predicting the future, then logically you should doubt him as well and do your own follow-up research. This is true for any advice you read – don’t just blindly follow the words of one person who proclaims to know all.

Chapter 4 – Of Babies and Bathwater
Of course, many people are holding a lot of U.S. investments, both in their retirement accounts and in their taxable investment accounts. Schiff’s advice to people holding a lot of American stocks is to move them into producers of basic materials, energy companies, agricultural companies, and oil companies, as well as into conservative foreign companies that pay a good dividend. What should you avoid? Schiff tells people to stay away from any stock that relies on the American consumer – consumable goods should be avoided like the plague.

Chapter 5 – Hot Stuff
Another piece of the investment puzzle when the stock market is in terrible shape is commodities. Schiff argues that basic commodities are a great thing to own when the economy slows because people will still need products, it’s just that complex products will be less popular than basic staples. That points one straight towards commodities – crops, livestock, raw materials, and so on. Schiff says the average investor should look at index funds of commodities as a good way to invest.

Chapter 6 – The Ring in the Bull’s Nose
Here, Schiff addresses rare metals – gold and silver. Schiff argues that these commodities are different because there’s an inherent limited supply of them – they’re rare because there simply isn’t that much of either metal on earth. Thus, they will hold their value always to some extent and are a solid place to put your money to preserve wealth over the long, long term. I think this is largely true, but I also think gold and silver have both bubbled over the last decade and the prices may be on the high side. However, when you buy them, you are getting a rare commodity.

Chapter 7 – Weathering the Storm
Schiff argues that if hyperinflation is coming to the United States, it makes sense to own stable foreign stocks, and here’s why. If the United States is experiencing inflation far worse than the rest of the world, then the dollar will devalue compared to other currencies, so an investment in a foreign company will not only gain in value in terms of the company itself, but it will also gain in terms of the dollar. Schiff gets pretty overzealous here, going so far as to actually shill for his own investing company which handles such foreign investments, but the argument is good if you believe hyperinflation is coming. I actually don’t – I think deflation (as I mentioned this morning) is more possible, but neither one is a likelihood by any means.

Chapter 8 – Favorite Nations
In what nations should you invest? Key things to look for are economies that aren’t completely hinged to the United States (companies and nations with a huge export business to the U.S.) and also internal stability. He lists a bunch of nations with great investing opportunities in the current situation, but seems most infatuated with Australia, arguing that it has most of the upside of the United States but without the rampant overspending and impending collapse. Other nations mentioned include Norway, Switzerland, and Singapore.

Chapter 9 – If You Want to Roll the Dice
If you’re looking to take risks outside the US, Schiff looks towards emerging markets – nations that are just now undergoing an industrial revolution and are pushing their way out of the third world. Given the dynamic nature of such nations, Schiff seems to encourage investors to limit the amount they invest there (keeping it a small portion of their investments) and stick to index funds that buy a wide variety of individual stocks from these emerging markets.

Chapter 10 – To Infinity and Beyond
What areas within the United States might remain strong during this downturn, or might benefit because of it? Schiff points towards several areas. He predicts a rebuilding of basic manufacturing within the United States as well as continued focus on the areas where we export things, such as entertainment. Obviously, as mentioned earlier, companies that produce basic commodities will also remain strong.

Chapter 11 – A Decade of Frugality
Schiff makes a statement here that I wholeheartedly endorse: frugality is the best way to prepare yourself and the best way to survive any downturn. Focus on spending less money on unnecessary purchases. Save and invest when you can, both in your self (through basic skills) and your personal infrastructure (through stockpiling and resourcefulness) as well as in the investments described throughout the rest of this book. Schiff argues that this is a good recipe for businesses to follow, too, since running a business over the next decade in the United States might be dicey.

Chapter 12 – Pack Your Bags
What if you don’t want to live through this downturn? Schiff talks about emigrating here – moving to another country. He points towards nations like Russia, China, India, and Brazil (the so-called BRIC nations) as places where the growth of the 21st century is happening – and that the best thing you can do when you get there is to start your own business. While this is great advice for the heavily entrepreneurial reader, it’s a bit out of the range of most people.

Chapter 13 – The Light at the End of the Tunnel
To close the book, Schiff argues that all this doom and gloom does have a silver lining. Once we get through a rough decade or so of adjustment in terms of lifestyles and economy, we’re likely to come out the other side much leaner and ready to fight for our place in the world – and that can only mean a boom time for America. The path between here and there, though, according to Schiff, is quite dark.

Some Thoughts on The Little Book of Bull Moves in Bear Markets
If nothing else, this book makes for a great basic economics textbook. In terms of relating concepts of economics to real-world personal finance, this is perhaps the best book I’ve ever read.

On the other hand, Schiff pretty clearly has a strong perspective on things. He really believes that an apocalypse is coming (or is practically here), and part of the purpose of this book seems to be that he’s making a case for this apocalypse, leaving the rest of the book to suggest how to deal with this situation.

Thus, this is a great book to read with a strong neutral fact source along the way. Schiff’s advice is great if you believe his case, and this book is certainly educational when it comes to economics, but he’s intentionally shading things to make his case seem very strong (as any good persuasive writer would do). Thus, if you read this and get interested in specifics, read Schiff’s take, but don’t assume that’s the end of the story. Follow up with some unbiased writing on the topic using other resources – Wikipedia is often a good place to start.

Is The Little Book of Bull Moves in Bear Markets Worth Reading?
Schiff is a strong pessimist about the next decade or so in America, and usually I avoid books that predict an extreme environment, whether it’s a positive one (like Millionaire by Thirty) or a negative one (like this book).

The Little Book of Bull Moves in Bear Markets stands above the pack a little bit, though, because Schiff makes it very clear that he’s predicting a strong bear market for a while and explains how he comes to that conclusion. You never doubt where he’s coming from, whereas other predictors often don’t make the basis for their assumptions clear at all.

Even though I don’t agree with Schiff’s assumptions, I did find this book to be an enjoyable, thought-provoking, and useful read. It provided a lot of good ideas on how to invest over a long down market and provided a lot of good, basic economics material that actually ties in well with personal finance. Plus, Schiff doesn’t simply say that investing solves everything – he encourages frugality and building personal skills as well.

Given all of that, I would definitely say that The Little Book of Bull Moves in Bear Markets is a worthwhile read for anyone interested in the topic, though I wouldn’t wholeheartedly accept Schiff’s negative economic view.