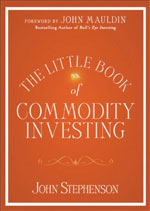 Still, the idea of investing in something tangible holds some interest for me. Commodities are tangible, material things, often used in the manufacture or production of other things. Instead of owning a share in a corporation that exists on paper only, you own a thousand bushels of soybeans. That has direct appeal, even if it’s not something I deeply understand.

This week, I decided to correct that lack of understanding by reading The Little Book of Commodity Investing by John Stephenson, the latest book in the wonderful Little Books, Big Profits series. I like the series because it offers gentle introductions to specific investing topics from individuals who are actually involved in that field. John Stephenson is a very experienced portfolio manager who has been in commodity investing for a very long time – he knows his stuff.

This book largely boils down to a sequence of short chapters each dealing with a particular flavor of commodity investing – oil, foodstuffs, natural gas, precious metals, and so on – with a chapter on each end to bookend these pieces.

One | Calling on Commodities: Why Commodity Investing Is a Savvy Bet
The big argument in this opening chapter is that the coming years are going to be a boom for commodity investors as the tendrils of globalization dig deeper into nations like China, India, Brazil, Russia, and so on. These nations are going to be building infrastructure like mad and the ingredients to build that infrastructure, such as steel, oil, and natural gas, are going to be in high demand. This will also give rise to a huge global middle class which will result in consumer goods being produced and purchased at a huge rate, and those goods will be made from – you guessed it – commodities.

Two | Gettin’ Goin’: Companies or Commodities?
Unfortunately, directly owning commodities really isn’t a convenient option for most people. Do you have a place for 1,000 bushels of soybeans or 500 50 gallon drums of oil? For most people, the answer is a resounding “no.” The solution is to invest via a futures contract, in which a producer agrees to sell you some amount of a commodity at a certain price on a certain future date. So, for example, you might agree to a contract for 100 barrels of oil today for $30 a barrel, with the oil to be produced in six months. In six months, you then have 100 barrels of oil which you can sell to someone who will actually use it for the going market rate for that oil – it might be $35 or it might be $25. The chapter describes this market in detail with a tone that makes it quite understandable.

Three | Gusher: Investing in Oil
This chapter and the seven that follow it each give an outline of a particular commodity market, discussing in detail why it works as well as reasons why you might want to (and might not want to) invest in it. I felt that Stephenson’s most compelling case was with oil. He discusses at length how economies around the world are rapidly building infrastructure and moving to automobile transportation at the same time that world oil supplies seem to have peaked. If demand is going up and supply is going down, then prices are probably going to go up. The risk? Nations begin moving to energy sources besides oil for transportation.

Four | Drilling for Dollars: Profiting from Natural Gas
Stephenson doesn’t seem nearly as bullish on natural gas, however. Due to a lot of technological innovations, huge deposits of natural gas can now be accessed that were inaccessible before. While the demand for natural gas seems to be level, the supply has gone up, which means that prices have gone down. This does mean that prices are low at the moment, so an individual who carefully followed federal reports on natural gas reserves could turn a profit, but the general direction here is much weaker than with oil.

Five | Going for Gold: Prospering with Gold and Precious Metals
Gold. It seems to have been the buzzword over the past few years. As with most investing guides, Stephenson points out that gold seems to do best when the United States is having economic struggles – like right now, for example. However, he’s far from a gold bug – he suggests that, rather than hoarding gold and putting all of your money into it, you’re better off just buying a gold ETF (basically, this amounts to buying a stock in gold) as a small part of your investments. He gives short discussions of other precious metals here as well, such as platinum and palladium.

Six | Digging It: Making Metals and Mines Work for You
Here, Stephenson talks about “construction material” metals – steel, copper, aluminum, zinc, and so on. These items fluctuate in line with the global economy, meaning when construction picks up, these items pick up and vice versa. The London Metals Exchange drives almost all of this trading, and traders often keep tabs on supplies of various metals. When the supply drops, the prices will go up.

Seven | Betting the Farm: Bingeing on Food Inflation
I didn’t get a sense of the author’s advice on investing in foods overall. In the chapter, he discussed several trends in foods that point in opposing directions – some pointed towards greater demand, others pointed toward greater supply. I don’t think he was fully bullish on crops.

Eight | Ordering the Breakfast Special: Finding Profits in Foodstuffs
On the other hand, foodstuffs, like fruits, coffee, sugar, cocoa, and so on, are items that he seems to be strongly bullish on. Such crops are simply too exposed to the weather (giving them shaky production bases) and in such high demand that the prices will continue to stagger upwards into the foreseeable future, at least as far as Stephenson sees it. If you’re going to do this, he recommends buying ETFs.

Nine | Gaining in Grains: Investing in Grains
Grains are such a fundamental part of worldwide diets that the demand for such items is pretty strong and pretty steady in terms of growth. The issues come in with supply, wich is affected by lots of things from the weather to crop diseases. Another factor to look at is whether long term changes in diets globally will have any impact, though it hasn’t shown a significant impact to this point.

Ten | Bulk Up: Benefitting from Bulk Commodities
Here, Stephenson discusses iron ore and coal, which are used in huge quantities in industrial production. As with oil in the third chapter, Stephenson seems to be very bullish on these things, believing that the future points to more and more industrial production and infrastructure building as nations like China and India build a more sturdy infrastructure than they have.

Eleven | Capitalizing on Commodities: Why Commodities are Happening
Stephenson concludes the book with a short chapter that argues strongly on behalf of the idea that India, China, Russia, and other Asian nations are growing very rapidly in terms of their economy and will do so for quite a while. Since this idea underpins an awful lot of this book, it’s a key one, and Stephenson makes the case very well.

Is The Little Book of Commodity Investing Worth Reading?
If you want a book that will teach you some of the concepts behind commodity investing, The Little Book of Commodity Investing is probably going to be a very enjoyable read for you. It explains why investors would invest in certain commodities and gives some very general suggestions on how to do it.

On the other hand, if you want a step-by-step guide on what to buy, The Little Book of Commodity Investing will not really work for you. The book focuses on passing along ideas, not instructions.

For me, The Little Book of Commodity Investing gave me quite a lot of food for thought. Will it turn into actual investing? Probably not. Did it give me insight into areas I didn’t understand very well and put enough information in place that I now can understand and incorporate new things? Absolutely.