Review: The Little Book of Economics 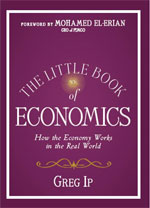 I’ve really enjoyed the “Little Books” series of personal finance and investing books over the years, and I’ve reviewed almost every book in the series – twelve so far. They’ve (almost) always done a great job of breaking down a specific investment topic into layman’s terms so that something seemingly complex becomes something pretty understandable, plus the authors are almost always respected individuals in that specific field.

Which brings us to The Little Book of Economics, which filled me with trepidation as soon as I read the title. Economics is a very theory-based field and is often deeply tied to political stances and movements (Keynesian economics, for example, was what the New Deal was modeled after, and laissez-faire capitalism implementations in countries like Chile were directly out of Milton Friedman’s work).

At the same time, economics is a field that’s often misunderstood by the general public. The references to it in mass media are often unclear and skewed and it leaves the workings of groups like the Federal Reserve shrouded in mystery for many.

What I hoped for the book was that it would explain the connection between real-world events and economic theory. What I feared from the book is that it would slide into promotion of certain economic perspectives over others, rendering the book more of a propaganda tool than a tool for learning.

That’s why, on many levels, I was glad to find that The Little Book of Economics was written by Greg Ip, an extremely well respected economics journalist who currently serves as the U.S. economics editor at The Economist (which is probably my favorite magazine). While the magazine does run opinion pieces and occasionally seems to advocate specific stances and candidates, the writing on the whole does a great job through and through of doing just what this book claims to do – connecting economic theories to real-world events.

The Secrets of Success
The book opens with the idea that economic success comes from two elements: investing and ideas. In essence, investing provides the foundation upon which ideas can grow and transform those investments into new products or the same products at a lower price. The reason the United States does well economically is because we produce a lot of ideas, and the reason other economies are catching up is because they’re getting better at it. Over the long run, investing in ideas is what drives us forward.

Economic Bungee Jumping
Every economy goes in cycles of expansion and recession (over the long run, it usually grows, but we’re talking about the short run – ten years or so). When things are going well, it’s due to great expectations for the future. Eventually, expectations exceed reality and people start cutting back. Eventually, expectations are far less than reality, people realize this, and begin to spend again. It alternates back and forth.

In-Flight Monitor
The four elements of economic growth are consumer spending (the biggest), business investment, government spending, and exports. Combined, these are referred to as the GDP of a nation (gross domestic product). Forecasting changes in GDP is notoriously difficult – if we were perfect at it, we would have constant and steady economic growth.

Labor Pains
In the short run, jobs go up and down with the economic cycles. In the long run, the number of jobs almost perfectly tracks the number of people who desire employment. Unemployment numbers are perhaps the best indicator of an economy’s health at a given moment. There’s also an interesting section about “superstar” salaries and why some people are paid a lot more for only a little bit more skill.

Fire and Ice
Both high inflation and deflation are bad – a low rate of inflation is the best situation (and that’s what we have right now). Inflation usually goes up when the economy is overheating, because employers are desperate to find more workers than are available and thus bump up salaries to attract them. Of course, when the economy is down, companies don’t usually want to lower prices too much, which is a good hedge against deflation.

Drop the Puck!
The economy is now global, period. The big problem with globalization, though, is that it encourages unequal wealth growth – the people that can take advantage of it to earn more already have a lot in their pockets to begin with, or the people who have very highly marketable skills. Workers who do a job that can easily be exported to a place where labor costs are lower are particularly at risk of losing their job. The solution for you? Find ways to make yourself stand out from the crowd.

All the World’s an ATM
Why do people invest in international stocks? Their economies are growing rapidly (big gains), but there are huge risks of international instability. In other words, big risk, big reward. Why does China hold so many treasury notes? They do it because the dollar is stable (compared to other options) and we do it because they’ll buy those treasury notes at a very low interest rate (kind of like getting a 2% loan to spend on whatever you want).

All the President’s Men
Politicians don’t control the economy (at least not in the United States), but they sure try to. They have all sorts of tools for shifting the flow of the stream a little bit, but the river of economic progress keeps flowing just like the mighty Mississippi. As long as people are productive, economies will progress and grow.

The Buck Starts Here
The Federal Reserve is a complicated organization that controls how much money is out there. They have the power to print more money as well as the power to actually destroy money if they choose. It exists as a balance between public accountability and private independence and seeks to help the economy avoid dangerous panics and too-rapid economic upturns and downturns.

When the World Needs a Fireman
When things really go south, like immediately after the World Trade Center attacks and at the low points of the recent downturn, the Federal Reserve can also act as a lender to prevent major companies from collapsing and putting millions of people out of work. Since the Federal Reserve can create money, they can lend whatever they need to. This, of course, is open to a lot of criticism because it gives the Fed a ton of power.

The Elephant in the Economy
The elephant in the economy is the government, plain and simple. The government has an enormous budget and the choices made in developing and executing that budget has a great deal of impact on how the entire economy behaves. Mostly, this chapter discusses how this all functions in the United States compared to other countries. One big difference is that the United States relies little on sales tax and consumption taxes (like a gas tax) compared to other countries, where sales taxes can reach 20% and gas prices are out of this world compared to what they are in the States.

Good Debt, Bad Debt
Can budget deficits be good? They can be, in moderation, because they allow the government to provide the same resources regardless of economic upturns and downturns. The problems appear when the debt becomes excessive and investors become worried that the government will default. Regardless of the seemingly large size of the debt, our gross national product is incredibly large and we are far from any sort of “danger zone” of defaulting – nations that default usually have many times larger debt loads than we have as compared to their gross national product.

Love-Hate Relationship
Why are banks so important? They’re the means by which savings are matched with those who need capital. When you put money into a savings account, the bank is effectively taking some portion of that and lending it to companies so they can grow and employ more people. Of course, this is a tricky balance (how much should be loaned out?) and some degree of regulation is needed or else it becomes very difficult for this transaction to occur. There is a lot of debate as to what form this regulation needs to take.

A Species of Neuralgia
Why do economic crises happen? Usually, it’s because people get caught up in a good thing and begin to ignore fundamentals. At some point, they’ve overspent and they need to sell what they’ve bought so much of. The problem happens when lots of people have done the same thing and there are more sellers than buyers. Think of the current housing market, for example. How can we keep this from happening? We can’t, but by being careful and prudent, we can survive such crises.

Is The Little Book of Economics Worth Reading?
If you’ve never read anything about economics but have often wondered about it, this is, quite simply, the best book for you to read. It’s short, but packs in a lot of information without becoming boring and often with a small, healthy dose of humor. It’s very, very readable and could be digested on an airplane flight.

More importantly, it gives you just enough connections between events and economic theory to pull you deeper into topics that interest you and makes reading economic news that much easier.

If you want to grow your understanding of how the economy works and why we’re having trouble right now without digging into an arcane textbook, this is probably the single best book you can pick up.

On the other hand, if you’ve read a lot of economics in the past, this book won’t be very revelatory for you. It speaks very well to the person who is new to economics, but not so much to someone who studied it in college, for example, and has kept up on the ideas.