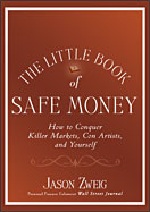 The Little Book of Safe Money by Jason Zweig is the ninth book in the “Little Books…” series, which each tackle a particular investing topic or strategy. To date, I’ve reviewed all of the previous books in the series, so here are links to my reviews of the previous eight entries.

So what’s the focus this time around? To sum it up in one word: risk. Zweig focuses on risk through the overarching idea of keeping your money safe and avoiding unnecessary risk, recalling that risk is often a reasonable portion of a successful investment.

The book goes beyond investment risk, however, and focuses on risk in many aspects of financial life. Let’s dig in and see more of what Zweig has to say.

One – The Three Commandments
Zweig’s “commandments” are simple and straightforward. Don’t take risk you don’t need to take. Don’t put money at risk that you can’t afford to lose. Don’t take risks if they don’t have a clear reward for that risk. These rules are pretty straightforward to apply in most situations – basically, stay away from truly murky things and only invest money that you can afford to invest in risky things.

Two – Solid, Liquid, or Gas?
A liquid asset is something you can convert into cash quickly and easily without losing much value in doing so. Many people think of some of their very illiquid assets as being liquid assets – like their home, for example, or their art collection. To be liquid, you have to have a seller, a buyer, a secure way of completing the trade at a low cost, and a price that’s reasonable to both parties. Stocks? You’ll probably be able to do that. Real estate? A bit less likely. An art collection? Not very likely.

Three – You Are an Egg
There are many risks that aren’t often discussed in financial writings, at least not all together. Inflation risk, your health, your location, your professional future – those are all risks that are often overlooked as people invest. There are investments that will let you hedge against all of these risks, from treasury inflation-protected securities to long-term disability insurance, that should be part of an overall plan.

Four – Keeping Your Cash from Turning into Trash
Cash is a key part of any portfolio. It can be held onto to ensure no loss in the money you’ve saved and can often be put places to earn a small, virtually guaranteed return (in an FDIC-insured savings account, for example). However, virtually everything beyond cash introduces some sort of risk – even treasury notes and money market accounts. Keeping some money in cash (or at least in TIPS) helps hedge all of the risks across your portfolio.

Five – Guarantees Are not All They’re Cracked Up to Be
Most guarantees have loopholes in them that often allow companies to slip right through them if they’re ever called on their guarantees. Things like SIPC insurance, for example, often don’t hold up when you most need them. The most trustworthy guarantees usually come from the federal government in the form of things like FDIC insurance, which are backed by the full faith and credit of the government. If the government fails, all bets are off on many, many, many things.

Six – Fixing Your Fixed Income
Don’t reach for yield. In other words, don’t go chasing bonds based on their yield because such bonds often have really high costs and fees associated with them that eat away quickly at your returns. Instead, focus on bonds and bond funds that have very low costs, like bond index funds. I myself use a bond index fund through Vanguard for part of my investments.

Seven – Stocks for the Wrong Run
Stocks are not guaranteed to beat every other investment over the long run. If you start investing in stocks near the peak of a bull run, you’ll have a hard time ever catching up to returns on other possible investments, even over a very long period. Instead, treat stocks as though they’re likely to earn better long-term returns, but not guaranteed, meaning they need to be mixed with other investments with lower risk (like cash).

Eight – Rules for Stock Investors to Live By
Don’t worry about stock prices. Instead, invest in the stocks of businesses you know well and you know are well-run. You should also do all you can to minimize costs. Diversification often isn’t the big deal it’s made out to be – you’re far better off investing in the things you actually know and understand than diversification for the sake of diversification.

Nine – Little Things Mean a Lot
Frugality. Yes, stare at that word. Here, Zweig makes the very good point that by cutting your personal spending in areas that work for you, you can easily come up with more money to invest and prepare for your future. Use a programmable thermostat and you’ll have $100 a year more to invest – no different than an extra 1% return on a $10,000 investment. Eat at home more often and you’ll have hundreds more to invest per year.

Ten – How to Get Your Kids Through College without Going Broke
Zweig’s real message here is to not overlook prepaid 529 plans – ones offered in some states that effectively allow you to pay tuition in advance for an education at a state school. While they’re not as flexible as investment-based 529 plans, they’re also nowhere near as risky as long as you know what school you’re attending, as you’re passing off the investment risk to the school. If you’d still prefer a normal 529, you’re better off investing as conservatively as possible within it and focus on contributing more (by living frugally).

Eleven – What Makes Ultra ETFs Mega Dangerous?
“Ultra” ETFs – those that are leveraged in other investments – are incredibly risky investments that many investing advisors promote as a good solution in a down market. In fact, such investments are incredibly volatile, swinging wildly on a daily basis. To put it simply, don’t invest in such things – avoid them like the plague.

Twelve – Hedge Fund Hooey
Another common misconception spread around is that hedge funds are a ticket to financial success. Much like “ultra” ETFs, hedge funds also carry a substantial amount of risk, because hedge funds often operate in secret. The name Bernie Madoff comes to mind. Why do hedge funds have such a reputation? Survivorship bias (the ones that survive get to tell the story, ignoring the mountain of failures) and backfill bias (the losing funds are never reported at all) are two big reasons.

Thirteen – Commodity Claptrap
Are commodities (like gold) a sure way to riches? Actually, commodities are incredibly volatile, showing huge gains and losses almost every year. In order to profit from commodities, you have to deeply understand and know them – and be able to eliminate as many variables as possible. For most investors at home, that’s not a realistic picture. If you simply must invest in commodities, balance those investments with some very stable investments (like TIPS).

Fourteen – Spicy Food Does Not Equal Hot Returns
Another investment often promising huge returns is emerging markets. If you invest in countries that are rapidly developing their industries, you reasonably have a chance to invest in companies that get huge very quickly – and make you a mint, right? Several problems. First, such markets are often really poorly regulated. Second, there are a lot of failures in such emerging markets. Third, it’s often hard to get reliable information about what’s actually happening there. In other words, avoid such markets.

Fifteen – WACronyms: Why Initials Are So Often the Beginning of the End
Acronyms are often tossed onto complex investments to make them sound much more palatable. Of course, that means that such investments are being marketed to someone, which then means that the person who developed the investment is selling a product instead of investing in this discovery. Who gets rich when you buy a carefully marketed product? Usually, it’s not the end buyer.

Sixteen – Sex
Men and women work together far better than they work individually, because their various strengths (on the aggregate) balance well. When you enter into a long-term relationship with someone of the opposite gender, you’re far better off opening up your investing and other financial choices to that partner and discuss them in detail. It’s not just because honesty is the best policy, but because your partner often has a different perspective that can counterbalance yours and lead you toward a better solution.

Seventeen – Mind Control
We all have lots of psychological biases. In day-to-day life, those biases help us manage the complexities of everything going on around us. Quite often, though, in investments, the biases work against us, causing us to make mistakes. The best solution is always to do your homework – and lots of it. Move slowly. Make careful choices. Bounce your ideas off of others and see if they see things you don’t.

Eighteen – Financial Planning Fakery
Similarly, it’s usually worthwhile to wait a bit to act on “tips” and advice that you hear. Quite often, such tips are based on rumor and innuendo and are proven to be wrong – or, when they’re proven right, the insiders have already run away with all of the profits and you’re left holding the bag. If you have some good information, sit on it for a day. Watch what happens. Do some follow-up.

Nineteen – Advice on Advice
If you don’t want to manage your investments yourself and want a financial advisor to handle it for you, take your time in making that choice. Take it slowly. Meet lots of people and ask lots of questions. Look at their hard numbers and figure up how much they’ll cost you over a long period. Don’t sign up for an advisor unless you’ve done lots of legwork and are very confident about your choice.

Twenty – Fraudian Psychology
A simple rule of thumb: if someone sends you an email or calls you about a particular investment, ignore it. You’re far better off doing the seeking and discovery themselves. People don’t waste the time and effort to spam you or to call you if they don’t have something that they’re trying to sell – and something that they’ll make a profit from when you jump on board with it.

Twenty-One – The Terrible Tale of the Missing $10 Trillion
People rarely do as well (on average) as one would expect given the annual returns on investments. Why? People often get out at the bottom of a market and get in at the top of a market, meaning their actual returns are worse than the long-term annual returns of a long-term investment. How can you beat that? Be patient. Ride the crests and the valleys. Only sell when you have a personal reason to sell, not because you think you can “time” the market.

Twenty-Two – How to Talk Back to Market Baloney
When people talk about something that “beats the market” or claims large returns, it’s going to be bogus, period. If someone actually had such knowledge, would they be selling it at all? Would they be giving it away? Even more important, if such returns did exist, then everyone would quickly invest that way and such returns would become the norm. They’re not. Stay away from such nonsense – and use some common sense.

Having said that, the book doesn’t really cover a lot of new ground if you’ve read a lot of books and articles on investing over the years. It’s mostly just a thorough coverage of the risks that an investor is exposed to – and investors that are well-studied and have seen risk hammer people (from Bernie Madoff to housing bubbles) are familiar with many of the points.

Zweig’s writing style is really accessible, solid, and dare I say it, enjoyable. If you’re a beginning investor, pick this one up. You won’t regret it.