Review: The Little Book That Beats The Market 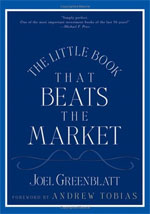 I was hoping for a similar tone as Bogle’s book, which was basically a gentle walkthrough of the investment philosophy behind putting one’s money in low-cost index funds. In a way, I got exactly what I wanted – this book does walk gently through an investment philosophy. Greenblatt has a storytelling tone that’s maintained throughout the book, and this writing style, coupled with the book’s brevity, makes The Little Book That Beats The Market a nice little read.

The real question is whether or not a short book written in a conversational tone can really bring anything to the table for the individual interested in personal finance issues. Is The Little Book That Beats The Market really worth a read for the average person? Does it present a coherent, comprensible, and easy to follow investment philosophy?

Walking Through The Little Book That Beats The Market

This book is ostensibly divided into thirteen chapters, but the chapters are highly story-based (Greenblatt likes to weave a good tale) and they flow together quite a bit. Some of the chapters make really profound points, while other chapters introduce only the most fleeting of concepts. In the end, it makes the book not feel very dense at all.

Chapter 1
The Little Book That Beats The Market opens with a simple story about a boy selling bubble gum on the playground. The author and his son attempt to place a value on the business. In the end, it’s made clear that putting a value on a business is the key to investing in individual companies. Very simple stuff to open the book.

Chapter 2
The meat begins here, with an overview of risk-free (or nearly risk-free) investment opportunities. The under the mattress idea earns no interest at all and is thus the worst investment choice. Better options include a savings account (insured by the FDIC up to $100,000) and treasury bonds (backed by the US government) which can earn up to about a 6% return (right now, both earn about 5%).

Chapter 3
Stocks are gently introduced in this chapter as being small portions of companies that you can purchase that entitle you to a portion of the proceeds of that company. Obviously, stocks of valuable companies are valuable themselves – 1% of Microsoft is far more valuable than 1% of Joe’s Chicken Shack, for example. From there, however, it starts to get tricky – in order to determine if a stock is a good investment, you have to know what the future of the company looks like, and that requires some significant prognostication.

Chapter 4
Here, Greenblatt uses Benjamin Graham’s concept of “Mister Market” very effectively. Imagine that you’re the co-owner of a business with a crazy fellow called Mr. Market. On any given day, Mr. Market will offer to buy your share of the business from you at a certain price or sell you his business at that very same price. However, depending upon his whims, Mr. Market’s offers may radically change from day to day. Naturally, you’ll look to buy when you think Mr. Market’s price is far lower than what you think the business is worth, and look to sell when his offer is much higher than what you believe the business to be worth. This is exactly how the stock market works – at any time, you can either buy or sell a stock at a given price (or not do anything at all). If that price is much higher than what you think it’s worth, you should sell; if it’s far lower than what you think it’s worth, you should buy. But how do we have any idea what the stock of a given company should be worth?

Chapter 5
Some reviews of this book complain that it really only has two ideas in it, and both of those ideas are in this chapter. In a way, this criticism is correct – if you’re already knowledgeable about investing, this chapter contains the essence of this book’s investing philosophy, and it really only boils down to two things, and these two things seem incredibly simple. First, a higher earnings yield is better than a low one – a company that earns a lot compared to the price of a share is good (this is otherwise known as the P/E ratio – the lower the P/E ratio, the better the deal). Second, companies with a high return on capital are better than companies with a low return on capital. Good businesses are able to do more with their dollars than bad businesses. Combining the two means that you should focus on buying good businesses (with a high return on capital) that are cheap (with a low P/E ratio).

Chapter 7
Greenblatt likes to refer to this idea from chapter 6 as his “magic formula,” and here he merely shows that in the past the magic formula has worked like a charm, producing stellar results. In fact, the higher the stock is on the magic formula list, the better the stock’s annualized performance in later years.

Chapter 8
However, there is a catch: in individual years, this “magic formula” often doesn’t do well. It only really shines (and “beats the market”) over the long term. If you’re actually willing to stick with it over several years, through thick and thin, then it will pay off for you. If you’re not willing to do that and just let it ride, then this investing concept won’t necessarily work.

Chapter 10
This portion is actually rather interesting, but it falls just short of getting too technical. Basically, the author argues that the magic formula works because over time the market tends to be efficient, but at any given time, little pieces are inefficient (some stocks are overpriced and some are underpriced). The magic formula basically looks at the stock market for the last year, looks at two key pieces of information, and tries to find those stocks that are the most underpriced, assuming that over the long haul they won’t be underpriced and will actually go up to the average, which will mean a big gain for the investor.

Chapter 11
Most people have no business investing in individual stocks on their own. A bold statement to make in a book about individual stock picking, but it’s a true one. Basically, instead of just blindly following this formula, Greenblatt actually encourages people to use it merely as one tool in the toolbox – use it as a “first pass” filter to eliminate bad stocks, then just pick from among the top ones from the formula.

Chapters 12 and 13
The book concludes with these two chapters, which basically close up the topic by encouraging most investors to invest in index funds instead of doing individual stock picking, because broad-based index funds return well and individual stock picking, even using this formula, requires a lot more patience and tolerance of short term losses than most people really have.

The Magic Formula In A Nutshell
The book concludes with a multi-page appendix that lays out how to apply the magic formula. Here’s that explanation in a nutshell:

Go to a website that lets you filter stocks by certain criteria (like this one at Yahoo!). Filter for stocks that have a ROA (return on assets) of at least 25%, then rank them according to their P/E ratios, with the lowest at the top. Toss out all stocks with a P/E lower than 5 (something’s fishy there), all utility and financial stocks, and all foreign stocks. Buy five or seven of these stocks a month for five months (or so). When you near a year of owning one of these stocks, if it’s at a loss, sell it when you’ve owned it one day less than a year and if it’s a gain sell it when you’ve owned it one day more than a year (playing games with the capital gains tax, basically). Then reinvest what’s left. Keep doing this for at least five years. That’s it!

The Little Book That Beats The Market is a splendid introduction to fundamentally sound individual stock picking. The real key word here, though, is introduction – this book literally starts at the point of kids on the playground selling bubble gum (no joke) and builds from there to explain the fundamentals of the stock market in a very warm tone.

In fact, the entire book can be summed up in the following sentence: The Little Book That Beats The Market sums up how the stock market works and encourages investing based on return on capital and earnings yield. Really – that’s almost the entire meat of the book. That’s not necessarily a bad thing – the content here wouldn’t overwhelm anyone – but if you’re looking for a very thorough investment guide, this one probably isn’t it.

On the other hand, if you’ve ever thought about investing in individual stocks but have no idea what to do, The Little Book That Beats The Market is an excellent place to start. I would recommend it as the first book to read on the topic, to be followed by Jim Cramer’s Real Money as a follow-up if you’re really interested in sticking your toes in. In other words, read this book if you’re thinking about individual stocks at all, but don’t know where to start.

Even if you’ve decided against investing in individual stocks (I’m still riding the fence, myself), this book is worthwhile because it explains, in very simple and conversational terms, the basics of how to evaluate stocks and how to invest in them to maximize your dollar. It never hurts to understand the topic.

The Little Book That Beats The Market is the thirty-sixth of fifty-two books in The Simple Dollar’s series 52 Personal Finance Books in 52 Weeks.