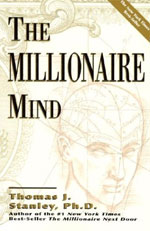 The Millionaire Mind is a sequel (basically) to Stanley and Danko’s earlier book The Millionaire Next Door (which I quite liked; see my review of The Millionaire Next Door). This book is basically a continuation of the same premise: an analysis of the results of extensive surveying of people with a net worth of $1 million or more. Is it a rehash or does it actually contribute interesting new information? Let’s find out.

An Odyssey of The Millionaire Mind

Chapter 1: An Introduction to the Millionaire Mind
Instead of an introduction to the book, this chapter actually compresses the entire book down to about twenty five pages. Here’s a hot tip: if you see this book at the bookstore, read the first chapter and you’ve read most of the book – only read further if you want more detail. Seriously, the key points are all outlined right here.

discussed the content of this chapter early this week – it focuses on specific traits that millionaires self-identified as being important in their success. For the most part, this was the most useful chapter in the book, because most of the traits that were marked as most important are ones you can learn (being honest with all people, being well-disciplined, getting along with people, having a supportive spouse, working harder than most people, being very well organized, etc.) are ones you can control, while the ones you can’t learn (having a high IQ, etc.) are at the bottom of the list. As I concluded in the article linked to above, personal development works.

Chapter 3: School Days
It turns out here that great grades aren’t necessarily the key to success, but tenacity and leadership skills are. In other words, if you work hard and are involved in extracurricular activities (particularly in leadership roles) but are a B student, you’re in much better shape to succeed than an A student who coasts and isn’t involved in said activities. In fact, the chapter largely indicates that the B student is preferable here. In other words, don’t be ashamed of your grades – only be ashamed if you’re not willing to work for it.

Chapter 4: The Relationship Between Courage and Wealth
It takes courage to be rich, in several different dimensions: courage to not follow the greater spending trends of society, courage to start one’s own business even through the risk, and the courage to not spend the money frivolously once he/she has it. Mostly, the lesson here is to not just follow what everyone else is doing, but follow your heart and you’ll do better – something I believe in in earnest.

Chapter 5: Vocation Vocation Vocation
Here, the book suggests that you should find a vocation that not only you’re passionate about, but one where the competition is comparatively thin. This can often be done through specialization (finding something that you can do that others can’t or don’t) or by finding fields where you can succeed because it’s underexploited. In other words, don’t try to write the Great American Novel if you want to become a millionaire.

Chapter 6: Choice of Spouse
This chapter is all about a fundamental point that should be true for any marriage: never choose a spouse based on superficial reasons. Ever. If your relationship is about physical attraction above all, it won’t be rock solid when you need it to be because the bedrock of a reliable marriage is compatible values. If you have appropriate values for becoming a millionaire, then you’ll just undermine all of it by having a spouse that doesn’t share those values.

Chapter 7: The Economically Productive Household
Frugal living is the key here; in general, the millionaires surveyed by Stanley look at factors such as total cost of ownership before making purchases, using items through their entire lifespan even if they show some wear, and buying late model used cars that are reliable and can be driven for several years. Frugal values pay off whether you’re poor or rich.

Chapter 8: The Home
Another big clue appears here when it’s shown that millionaires on the whole do not buy houses that are ostentatious, but instead are functional for what the needs of the people are. They generally take their time looking for homes, search out bargains, and clearly define their needs before they buy, including factors such as good public schooling and so forth. They also buy modestly – the average millionaire owns a home with a median value only slightly above the median value for all homes; in fact, many of the most ostentatious homes are owned by non-millionaires.

Chapter 9: The Lifestyles of Millionaires: Real vs. Imagined
This short chapter reinforces the notion that most of the surveyed millionaires live typical lives: dining at home, enjoying time with their family, and so on. Most of the trappings of the millionaire lifestyle (“Let’s dine on the yacht with Quincy and Nathaniel”) are much more fiction than fact, or are misrepresentative of how millionaires actually live.

Chapter 10: A Final Note About the Millionaire Mind
The final, brief chapter has a few anecdotes, but mostly it ties up the entire message of the book in two distinct words: think different. Don’t just follow what everyone else is doing.

Let’s be honest here: this book is mere continuation (and in some places, rehash) of The Millionaire Next Door. It’s a good read, but much of the same material is found in both books.

On the whole, I felt that The Millionaire Next Door was the more complete book of the two and I would recommend it above this one, but there are two big areas where The Millionaire Mind might be the winner. First, this book doesn’t have nearly as strong an age bias as the first book did, which means that if you’re young, you will likely feel more comfortable with. Second, it focuses on what I like to call “life management” skills more than financial planning, which might be of interest to you if you’re looking for behavioral aspects of how millionaires act. In particular,

the second chapter stood out to me.

As a personal finance book, The Millionaire Next Door is a better choice. As an all-around read, though, The Millionaire Mind does hold its own and is potentially more palatable to some specific audiences.

The Millionaire Mind is the twenty-eighth of fifty-two books in The Simple Dollar’s series 52 Personal Finance Books in 52 Weeks.