Review: The Myth of Multitasking

Every other Sunday, The Simple Dollar reviews a personal productivity, personal development, or entrepreneurship book. 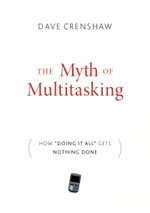 This book attracted me from the title alone – The Myth of Multitasking is something I’ve observed over and over again in my own life. In fact, I’m observing it right now – I can write better and faster if I shut down all distractions: my email program, my web browser, my instant messaging programs, my phone, and my office door.

Whenever I start trying to juggle multiple things – like writing while on the phone with someone or checking other websites while doing research – I cease to do either one very well. I might get the general idea of either activity (I get through a phone call without deep conversation, plus I get a half-baked article written), but I don’t do either one with any degree of excellence. Even more important, not much time is saved, either – I wind up spending roughly the same amount of time if I concentrate on the phone call, then turn off my phone and concentrate on the article – but both wind up with greater quality if I do them one at a time.

Dave Crenshaw, the author of The Myth of Multitasking, noticed the same thing in his own life and sought to investigate it more deeply. Why do people multitask? Why does it create an illusion of productivity? What’s a better way of doing things? Let’s dig in and see what he has to say.

Rather than just relating this story in minute detail, I thought it’d be worthwhile to point out several of the biggest ideas hidden within the story, ones applicable to how both you and I work.

Switch time Early on, Phil talks about the idea of “switch time” – the time it takes for a person to mentally switch from one task to another, picking up threads and getting one’s mind in gear. Some switches can be done very quickly, but others may take a few minutes.

So let’s look back at my own example of trying to write an article while talking on the phone. In that case, I’m not really doing two things at once – I’m switching back and forth between those two tasks with a tiny slice of time lost with each switch – say, two seconds. Let’s say over the course of a ten minute phone call, I switch my attention away from the article to the phone call ten times and back to the article ten times. This means, assuming the time is switched equally, I have spent four minutes and forty seconds of the phone call actually paying attention, four minutes and forty seconds trying to write the article (a sentence at a time, of course, because I keep getting interrupted), and forty seconds doing nothing but mentally switching between tasks.

Now, out of a ten minute call, if I’ve only paid attention for four minutes and forty seconds of the call, I’ve actually wasted the majority of the call. I’ve likely missed a ton of nuance and specific points along the way. Similarly, I’ve only gained four minutes and forty seconds’ worth of very stilted writing, most of which I’ll have to polish later on to make it useful.

So what am I left with at the end of ten minutes? A phone call that didn’t go that well at all (because I was obviously distracted and not paying full attention) and four minutes’ worth of half-baked writing that I’ll probably have to re-do.

Instead, I could have paid full attention to the phone call, listening attentively, asking questions, and taking important notes, then turned off my phone and wrote with full attention. In the end, the time investment would be roughly the same – I wouldn’t have to re-do that writing, after all – but the quality level would be much, much higher.

Human interactions People are very, very good at telling when you aren’t giving them full attention. If you’re on a phone call and trying to send emails while talking, it’s usually fairly obvious to the person on the other end that you’re distracted and not paying attention. How? That “switch time” comes back to haunt you.

Let’s say you’re concentrating on an email and someone in the phone call asks a question of you. You notice this and switch to the phone call. It takes a second or two for you to replay what was said, then another second or two to develop an intelligent response. This creates an uncomfortable pause in the conversation, one that’s noticed by everyone involved. It slows everyone else down and creates a negative impression of you as someone who doesn’t really care enough to be involved.

On the other hand, if you’re paying careful attention and formulating your own ideas and thoughts about the conversation as it goes along, when a question is addressed to you, you’re likely able to handle it immediately, looking quite sharp to the crowd.

In meetings, do you ever notice how some people seem to always have a good, alert answer, while others seem to hem and haw before answering? Usually, the only difference between the two is whether or not they’re paying attention and not multitasking. Which one of the two do you think comes off better to the others in the room?

Availability So how can you prevent interruptions? Crenshaw’s solution to this harkens straight back to my college days: make yourself available at certain times and not others.

During those interruptible times, give the interruptor your full attention. Focus entirely on the meeting at hand and focus on giving useful input to the questions asked of you. When you’re not meeting but still in “interrupt” mode, focus on those little tasks that need doing, like quick emails to people, replacing office supplies, and so on.

Not only that, make this policy clear to those who would interrupt you. That way, they know when they can talk to you and get your full attention and also know when you’re not available, too. They’ll understand – they often need that time to focus.

One place where several friends of mine used to work had two hours of “collaboration time” each day where everyone was available to be interrupted. There was usually an hour of this mid-morning and an hour right after lunch. Other than that, you were almost forbidden from interrupting others. All meetings had to be scheduled during “collaboration time” and all quick stop-ins had to be done then, too. It seemed to work very well for them, indeed.

Time-switching on your family Think about this: how often have you sat around thinking about work when you’re spending time with your family? Then, have you ever felt like you’re never really escaping work?

I know. I was there not all that long ago. I would spend my evenings doing these very things, trying to keep The Simple Dollar running in the spare time on the edges of my job. At the same time, I’d convince myself that I was spending time with my family, when in truth I was splitting time – and losing a lot of time in the process of switching tasks.

A “family block” of time gives your family the focused attention they deserve. Don’t let work interrupt that block, because you’ll lose more than you’ll ever gain.

Giving productivity advice in the form of a story worked fairly well here. Almost always, it’s somewhat stilted – you’re trying to give real information within the constraints of a fictional story. However, it works well here – roughly as well as it worked in The Wealthy Barber.

The overall message of the book is pretty simple. Multitasking enables you to perhaps do more things, but it certainly doesn’t allow you to do more things well. It just allows you to cram more mediocrity into a certain timeframe.

So, is that worth your time? The writing style makes The Myth of Multitasking more approachable than most productivity books – if you find yourself zoning out when reading a really meaty book on this topic like Getting Things Done, you might find this one much more worthwhile.

For me, though, I thrive on complex books, and The Myth of Multitasking felt like too many words to express too few ideas. While I can see how the book could be perfect for some (particularly those who find productivity books boring), the content here would have been two or three pages in Getting Things Done, and I’d rather read the compressed version.