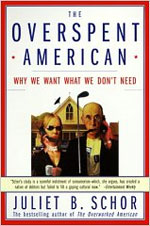 The vast majority of Americans are trapped in a cycle of “work and spend” and simply don’t know how to escape. We’re surrounded by an enormous abundance of incredible material goods, but these goods don’t really mean anything – they leave us with a hole that’s only partially filled by this stuff and we have to work at an incredible pace in order to pay for it. The Overspent American argues that the real root of this is a desire for things we don’t actually need.

The author of the book, Juliet Schor, has written other books on similar topics, including Born to Buy, a deep look at the effect that consumer culture has on young children that I read shortly after having my own child and found quite interesting and insightful. So far, the only television that my child has watched was a few Baby Einstein videos – we basically don’t turn on the television when he’s around.

I’ll admit to being a little afraid to read this book for several reasons, the biggest of which is that the last time I looked at a more socially-oriented book dealing with personal finance issues, it turned into a complete debacle of preconceived notions and liberal guilt without true understanding. I was concerned that this book would be much the same, turning quickly into a lengthy anti-consumerist rant without looking at the real causes and how to fix them.

Was this concern founded? Let’s dig in and find out.

This book, interestingly enough, is directly targeted towards middle class and upper middle class Americans, people most susceptible to spending more money than they can afford and thus the people most susceptible to debt in today’s society. I find myself in that group, and I’m also currently in a significant amount of debt, having just purchased a home.

1 – Introduction
The Overspent American starts off with a litany of explanations for why Americans, particularly those in the middle and upper middle class, tend to spend far more than they earn. Some of them are obvious (the competitive desire to keep up with others and not let ourselves or our family “fall behind”) while others are much more interesting (the growing disparity between the income of the top 20% and the bottom 20%). Just combining those two factors alone (not wanting to fall behind when the income gap is widening) paints a pretty clear picture of how the middle class can often run up incredible debts.

2 – Communicating With Commodities: How What We Buy Speaks Volumes
Here, Schor establishes the idea that particular items indicate that you’re a member of a particular group. People at certain income levels, for example, are often expected to dress a certain way and own certain things – an upper middle class family kitchen may be expected to have granite countertops, for example, or that middle class teenagers should have an iPod. These statements seem ridiculous when I type them out, but when I pause and think about the experience of people in these groups, they suddenly don’t seem ridiculous at all. Granite countertops are a way for a middle class family to state that they meet a certain income threshold and thus are of a certain “class.” iPods tell other teenagers that this person is not one of the “poor kids.”

3 – The Visible Lifestyle: American Symbols of Status
When you carry forth that symbolic nature of consumer goods to the next logical step, it makes sense that people would covet the items that represent a group that they wish to be a part of. Let’s say you live on a block where many of the people drive Lexuses and your Ford pickup sticks out like a sore thumb (not that I’m in that situation or anything…). There’s a subtle social pressure to purchase a Lexus or an automobile of similar quality so that you fit in with the group on your block. Thus, advertisers often look for people who are trendsetters and get the ball rolling by focusing in on them – if two or three of the most social people in a group suddenly have a particular item, it begins to spread throughout people in that group.

4 – When Spending Becomes You
While that step is still not too bad, it becomes dangerous for all involved when the spending becomes competitive. I live next door to a family that owns a Lexus LS 300. Even though I rationally know that I really have no interest in owning such a car, part of me wants to purchase something better to “one up” them. Why? Although we are in the same social grouping, I would have prestige within that grouping for owning a higher quality item. Rather than merely seeking acceptance, I’m looking for prestige – a sense that I’m somehow slightly ahead of the other person simply because of this purchase. All of these ideas are constantly encouraged by marketers, who rightly see such societal pressure as an enormous assistance to their effort.

5 – The Downshifter Next Door
This chapter (with the title parodying The Millionaire Next Door) focuses on telling the stories of various individuals who have moved away from this incessant societal pressure to spend – the variety of the stories is compelling, from people who have bought heavily into voluntary simplicity to people who have simply made commitments to stop buying. I actually find myself in this group – although I still do occasionally buy consumer goods (like my recently-purchased Wii), it was a carefully calculated buy based entirely on what I wanted to do, not based on anyone else’s influence. I’m also very big into frugality and I’ve been thinking about making a few very large lifestyle changes (such as a complete career shift and also going back to school, funded in part by the income from The Simple Dollar).

6 – Learning Diderot‘s Lesson: Stopping The Upward Creep of Desire
The final chapter includes nine wonderful points of advice for anyone wishing to escape from this consumerist mentality (without withdrawing from society and becoming a hermit, of course). These principles really cut to the chase of escaping consumerism, so I thought I’d spell them all out here. This chapter is excellent reading for anyone whose stomach was turned by some of the material described above.

Principle 1: Controlling Desire Stay away from malls and other places where you may be tempted to spend. When you go to buy a product, think about the durability of it as well as how much “more” you’ll need to fulfill that purchase (more games for that game console, more decorations for the redone kitchen, etc.).

Principle 2: Creating a New Consumer Symbolism: Making Exclusivity Uncool Whenever you see a symbol of excessive spending (like, for instance, my neighbor’s Lexus), look at it for what it is: successful marketing. If you lust for an item, ask yourself if you actually need it.

Principle 3: Controlling Ourselves: Voluntary Restraints on Competitive Consumption Not only encourage yourself, but encourage your friends and social groups to put caps on spending. Get involved in group decisions and suggest spending caps – you’ll quite often find that others are relieved, too.

Principle 4: Learning to Share: Both a Borrower and a Lender Be Consider sharing expensive purchases (like a lawnmower) with your neighbors. Look at rentals or secondhand shops for sporting equipment and other narrow-use items. Use your local library, not only for books, but for DVDs and CDs.

Principle 5: Deconstruct the Commercial System: Becoming an Educated Consumer Deconstruct every ad you see. When you see a product you superficially want, research it and understand it before making the purchase (and that means more than visiting the product’s website).

Principle 6: Avoid “Retail Therapy”: Spending is Addictive If a particular mood or event triggers a desire to shop, do something (anything) else instead.

Principle 7: Decommercialize the Rituals Don’t view Halloween, Christmas, or other social occasions translate into a reason to shop. Look for non-commercial alternatives to celebrating these societal rituals.

Principle 8: Making Time: Is Work and Spend Working? Look for ways to reduce the time you spend working so you can increase the time doing things more valuable to you. If you choose activities with that extra time that don’t involve spending and consumerism, you’ll still be financially fine.

Principle 9: The Need for a Coordinated Intervention Look for larger societal solutions to this issue. Get involved in organizations that focus on consumer issues and reducing spending.

The Overspent American is a fantastic book that should be read by every middle class American. It addresses rampant consumerism, takes it apart effectively, and provides a bevy of solutions that are applicable to almost anyone in the middle class. It’s a tremendous book, well worth reading for anyone, and is among the best books related to personal finance I’ve ever read.

Having said that, I have a few minor nits, the biggest being that compared to many personal finance books, the writing is simply at a higher level. It’s intended for an educated audience and while that doesn’t mean that it’s not readable by everyone, the writing here is going to be a bit slower to digest than, say, Dave Ramsey. The advice really applies to people with at least some significant earnings potential, though, so many of the people who might have a hard time with the tone and language of the book would be self-excluded from the topic (i.e., children and people with no interest in self-education). If you’re reading this review, though, this book won’t be a problem at all.

If any of the material in this review really spoke to you, or you find yourself in a situation where buying stuff isn’t really filling up a hole you feel inside, this book is an absolute must-read.

The Overspent American is the thirty-eighth of fifty-two books in The Simple Dollar’s series 52 Personal Finance Books in 52 Weeks.

Loading Disqus Comments ...
Latest from Trent
4 Surprising Steps to Achieve Your Long-Term Financial Goals
Why You Should Try Microsoft’s New “Money in Excel”
How to Make Money From Your Hobbies
Read more from Trent
Featured on: