Review: The Paradox of Choice 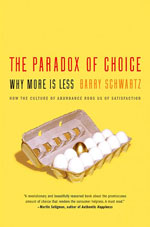 The Paradox of Choice focuses in on an increasingly vital aspect of modern life: the abundance of choice, and whether that choice is a good thing for our psychological state and our ability to make progress. Rather than taking the classic argument that choice is good, Schwartz actually argues throughout this book that an abundance of choice is bad, both in terms of our psychological and emotional well-being and in terms of our ability to make meaningful progress.

I know I’ve certainly felt anxiety before simply because of the incredibly wide array of choices before me. I also know that I’ve been almost forced to build up some mechanisms to eliminate a lot of choices very quickly, and these mechanisms sometimes leave me feeling as though I didn’t necessarily make the best choice, but just one of the good choices. This doesn’t really equate to happiness, especially over the long haul.

Does Schwartz’s book offer any deep insights into the effects of having so many choices? Let’s dig in deep and find out!

Looking at The Paradox of Choice

1. Let’s Go Shopping
When you walk into a modern supermarket or department store, you are hammered with choices. The act of exchanging money for goods was something that our ancestors did, but they were never delivered an onslaught of choice like we have on a normal visit to the store. Similarly, the choices for education have exploded – if our ancestors went to school, they almost always went to the one nearest to them and didn’t think about other choices. Similarly, we’re also slammed with choices that our ancestors never even considered. We have an abundance of television channels to watch, an almost infinite amount of films we can watch in our home, internet choices, and so on.

2. New Choices
Even compared to a generation ago, our choices have exploded. Take telephones, for instance. Thirty years ago, you had Ma Bell and maybe as many as two providers of local telephone service – though most places just had one. You paid a fixed rate for long distance calls and local calls and that was it, no other options. Today, there are tons of companies making offers based on just your landline, and the options are almost infinite – and we’re not even talking about cell phone options and other voice communication devices. Similar logic applies to health insurance, life insurance, medicine – even how we live our lives and develop our spirituality is suddenly overloaded with options.

3. Deciding and Choosing
Here, Schwartz outlines the basic process that we go through for each decision that we make: figure out your goals, evaluate those goals, list the options, figure out which options best meet your goals, and make a choice, then use the consequences of that choice to inform later choices. This works quite well in the environment that our ancestors lived in, where the choices were comparatively few and offered fewer options. However, today the number of options has increased (the “supermarket” effect), meaning we spend more time evaluating all of the options, plus the number of choices we have to make has increased (the “telephone” effect, where one choice has evolved into many choices). That means that each choice that we take seriously takes up more time, and we have more choices that demand to be taken seriously.

4. When Only the Best Will Do
Obviously, it’s true that different people invest different levels of effort into the decisions that they make. Some people seem to make decisions off the cuff and not worry about it too much – for those people, this surfeit of choices and options isn’t that big of a deal. It’s the people at the opposite end of the spectrum, the maximizers, that are really crushed by this. Individuals that are wired to maximize every choice, to get the absolute maximum bang for the buck and feel deep regret when they don’t make the perfect choice, are introduced to massive amounts of stress by this overload of options and choices. Naturally, we all fit somewhere on the spectrum between these two extremes, which means that the choices affect all of us with stress to some degree.

5. Choice and Happiness
Recently, I read and reviewed Daniel Gilbert’s Stumbling on Happiness, which basically posits that happiness is derived from our ability to visualize the future. Here, Schwartz offers a complementary thought, that this image of the future is built out of the result of our choices. Thus, combining the arguments, our happiness is a result of positive outcomes from our choices, and sadness is a result of negative outcomes of our choices. With less time to focus on each choice and far more choices to make, it becomes ever more difficult to make all the right choices that lead to a happier future.

6. Missed Opportunities
The first implication of the “difficulty” idea is that we miss out on opportunities. We are often rushed into making choices by not having adequate time to consider our options and thus we often are led into making suboptimal choices, particularly when rushed. Sometimes, we simply aren’t able to identify that best choice quickly and the compression of more options in the same (or less) amount of time makes the problem worse.

7. “If Only…”: The Problem of Regret
Another powerful implication is that we’re often left with more regret than before. Since we have more choices and less time to make choices in, we’re going to have many more choices in our lives that are the wrong choices, and thus many more opportunties for regret to enter our lives. I regret so many choices that I made earlier in my life, for example – these choices added together to make a dangerous financial situation for me.

8. Why Decisions Disappoint: The Problem of Adaptation
Sometimes, even the choices we do make add up to disappointment because we adapt to the choice, accept the positives of that choice as our new baseline, and then the negatives become an irritant. For example, let’s say we make a choice to buy a Lexus because we desire a luxury car. After driving it, we become used to the excellent handling and smooth ride, at which point many other cars begin to seem inferior. Then, we begin to notice problems with the Lexus and discover that it’s not perfect, either, leaving us with a higher standard than before without a higher level of happiness.

9. Why Everything Suffers from Comparison
More sand in the oil comes from the idea of social comparison, or keeping up with the Joneses. Because of all of these choices and options, we often lean on our peers to suggest what we should be buying when it doesn’t necessarily match what we need. We see the neighbor with a BMW and begin to question our own choices because of the choice of one of our peers, not because of the well-informed and carefully considered choice we made. When we begin comparing our own choices to those of others in our peer group – and in social strata above and below ours – we’re bound to find disappointment. We see our choice of a Honda as “worse” than the neighbor’s BMW, for example, even though the criteria for the two purchases were so different that they’re basically incompatible.

10. Whose Fault Is It? Choice, Disappointment, and Depression
All of these factors, when considered together, indicate a rather steady decline in the happiness of the average American. Various happiness “indexes” have indicated a steady decline in happiness over the last thirty years, just as the number of choices has skyrocketed for the average individual. Are the two related? Schwartz thinks so and has definitely presented a thought-provoking case throughout this book.

11. What to Do About Choice
So what can be done about it? This closing section offers a ton of suggestions, but they tend to boil down to these three big ideas.

First, spend more time making the important choices and less time making insignificant ones. If a decision is unimportant, decide it as fast as possible and don’t sweat it. You shouldn’t be spending five minutes evaluating different kinds of butter if you just need a stick of butter for your bread recipe, for example – just pick a brand you know and get on with it.

Next, focus on the aspects of the choices you’ve made that make you happy. What choices have you made in your life that have brought you great joy? You might not have chosen the perfect car, but you did choose a wonderful wife, for example.

Finally, de-focus on what others are doing. When your neighbor buys an expensive car, realize that that person used criteria that does not match yours and let it be.

Schwartz makes a very powerful and convincing argument in this book that an overabundance of choices in the modern world is leading to a sense of unhappiness in most of our lives, and offers several solutions on how to deal with it. The discussion is thought-provoking and the recommendations make a great deal of sense.

If you feel even somewhat overburdened in life, this book is worth reading. I’ve reflected on this book for several months and I’ve found that most of my unhappiness stems from stressing out over choices and regretting making the wrong choice in the past. That’s a real problem, and it’s one that I’ve learned to combat by reminding myself of the results of all of the good choices in my life.

If you’re one of the lucky people who doesn’t regret a choice or can make great ones very quickly, this book won’t hold much meaning for you. Instead, just realize that a lot of us out there wish that we had that gift of truly not feeling regret for the things that have slipped through our fingers.