Review: The Power of Less

Every other Sunday, The Simple Dollar reviews a personal development, personal productivity, or entrepreneurship book. 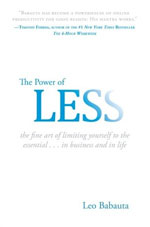 I’ve been a reader of the Zen Habits blog nearly since its inception. The author of the blog, Leo Babauta, applies a very simple filter to countless aspects of life: how can we break it down and make it simpler?

Over time, it became apparent that there were a handful of principles that could be applied again and again to any life situation, and those principles are the core of The Power of Less, Leo’s first book.

Reading the book, it comes off like a series of eighteen interconnected and exceptionally polished blog posts. This is actually a good thing – it means that each chapter isn’t overly long, has a focused and specific point, and connects well to the other chapters in the book.

Leo separates these chapters into two separate groups: one group clearly serves to explain the underlying principles behind the “power of less,” while the next group of chapters applies these principles directly to specific aspects of life.

Let’s dig in and see what we can learn.

Part I: The Principles
Quite frankly, I found the first half of the book much less powerful than the second half. Leo opens the book by attempting to set in place a handful of general principles that can be used in any situation to break things down into simpler and more manageable loads, but it becomes clear that these principles are clearly more powerful when seen in action.

Here are some of the principles outlined by Leo in this section:

Set limits Many people who are successful in a particular area often find themselves weighted down over time with related tasks – but ones that don’t really maximize their skills or their passion. Leo’s solution to this is to simply defend your area of expertise – step up to the plate for tasks that maximize your skills, but delegate or even avoid tasks that don’t utilize your skills well.

Single-task, not multi-task When you have one big task that needs to be accomplished, turn off all distractions and focus on that task. Remember, a five minute interruption actually eats much more than five minutes, as you also lose time in refocusing on the big task at hand. Turn off your phone, close that email program, and focus!

Start small Many things that we want to accomplish in life often feel too big to deal with – so we don’t. We give up on plans for the big diet or the big career push because the size of the task seems overwhelming. The key is to start small. Find a very small subset of the big task that you actually can accomplish, then focus on that. Instead of resolving to lose 50 pounds, resolve to lose one pound this week, for example.

Part II: In Practice
The second half of the book was much more inspirational and valuable to me, personally. Here, Leo focuses on applying the principles laid out in the first section to specific situations. Here are five examples that stood out to me.

Time management Leo subscribes to the “rocks and sand” philosophy of time management. You should fill your day with just a few major tasks (the “rocks”) and let the small tasks fill in the time around it (the “sand”). When you attempt one of the major tasks, focus in on it and nothing else. Eliminate every possible distraction and allow yourself to get in the flow with that task. Not only will you get done faster, you’ll often get it done better as well.

Email Only check your email a time or two a day – and never first thing in the morning. When you check it, you should set up automatic filters to get rid of the routine things (like PayPal notifications) so that you can just peek in a certain folder, see all of the ones of a certain type, and move on. Most importantly, don’t reply to everything – read an email and ask yourself if it needs a follow-up – or what the worst case is if you don’t follow-up. If there’s no burning reason to follow up, don’t – delete it and move on to something more important.

Filing See the stuff written above about email? Apply the same thing to filing. Do it regularly – every day is a good place to start. If you don’t think the document will be needed again, shred it now – don’t file it. If you keep on top of it (and don’t waste time and space storing stuff that’s not going to be used again), filing doesn’t have to be a huge task.

Daily routine Establishing a good morning and/or evening routine can be the key to a successful day. Figure out a handful of things you want to get done during that routine (a shower, reading, etc.), then do them. Make a thirty day commitment to just maintaining your routine – make that routine the focus of your day. Once it’s established and is clearly a normal part of your week, you’ll find that it has become the foundation of daily success in your life.

Fitness Start off small, with an exercise routine that you can complete without feeling completely worn out. Then simply repeat this routine every day (or on a schedule that fills most of the days in a week). Gradually, as you feel stronger, add bits and pieces to the routine. Most importantly, couple it with a thirty day commitment to a healthier diet – don’t completely transform your diet, but replace a few unhealthy items with a few healthy items (like eating a banana for a snack instead of bananas foster).

There’s no good or bad about this, either. I’ve come to believe that the general philosophy of breaking things down into smaller pieces and establishing simple routines really clicks well with some people – and completely doesn’t work for others. It happens to work for me, so I quite enjoyed the book. My wife, on the other hand, thrives on the complex – I wouldn’t recommend this book to her at all.

Regardless, The Power of Less is well-written, easy to pick up and read either all at once or in bits and pieces, and is simple and approachable enough that anyone can tackle it.