Review: The Richest Man in Babylon 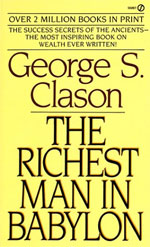 The Richest Man in Babylon first appeared on the scene in 1926 as a series of informational pamphlets on basic financial management. By 1927, several of these pamphlets had been compiled into a book and this collection has been in print ever since.

In short, The Richest Man in Babylon is a series of financial parables. These stories are set in ancient Babylon and relate the story of a Babylonian regular guy who used some basic financial sense and built up a great deal of wealth.

What’s so great about that, you ask? The stories are laid out like Aesop’s fables: each story has a concrete point or two that becomes apparent from reading and digesting the message. These points are basic tenets of how to get ahead financially in any time, not just in Babylonian times or in the 1920s.

This book is perfect if you learn by reading the experiences of others. The entire book is told in a story-like format, so it often goes down much like reading a collection of short stories. The language is a bit strange, as the author attempts to sound like this is an authentic tale from the ancient days, but the messages are as clear as sunlight.

Seven Cures for a Lean Purse

Since The Richest Man in Babylon is divided up into several short stories of varying degrees of quality, I thought I would review in great detail the one story that I found the most compelling.

The tale “Seven Cures for a Lean Purse” relates a story about Arkad, the titular richest man in Babylon. He is requested by the king to teach a class to anyone who wishes to attend on the methods he used to build his wealth. He divides this class across seven days, with each day focusing on a particular method for saving money. Here are the seven methods.

Start thy purse to fattening Take one-tenth of what you bring in and save it for the future. The book uses a coin analogy: for every nine coins you spend, take one and put it away for yourself. This is very sensible; a goal all of us should have.

Control thy expenditures Don’t buy frivolous things even if you have enough money to pay for them. Instead, make sure that you can continue to save one-tenth of what you bring in. For this reason, I write about frugality on The Simple Dollar.

Make thy gold multiply Once you start to build up some savings, invest that money so that it will make more money for you. Another pretty clear point; if you start saving money, it shouldn’t just sit in a mattress. Even a high-yield savings account is much better than that, and it can double your principal in about fifteen years.

Guard thy treasure from loss This one is interesting: you should only invest in things where the principal is safe. In other words, the book seems to discourage stock investing. I found this to be particularly interesting given that it was written in 1927, right in the midst of the first big American stock market boom. Of course, 1929 proved the author right.

Make of thy dwelling a profitable investment One should own their own home rather than renting because then money can be invested in the home or invested in other things rather than handed over to the landlord. Something tells me that this lesson applied better before people were looking at homes that were three or four times their annual income.

Insure a future income In other words, invest for retirement and your family’s well being after your passing. You should be dropping some Hamiltons right into your retirement account if you can possibly afford it.

Increase thy ability to earn Work hard, look for opportunities, and educate yourself. Today, a college education is one of the best investments you can make; I’m not saying that it’s a requirement to be successful, but it opens the door to greater possibilities.

The Five Laws of Gold

Another story central to The Richest Man in Babylon is the tale of the five laws of gold, a five-point philosophy handed down to later generations by Arkad, the titular richest man in Babylon. Here are the five laws, with discussion of what they mean in a modern context.

1. Gold cometh gladly and in increasing quantity to any man who will put by not less than one-tenth of his earnings to create an estate for his future and that of his family. In other words, a person should put away 10% of his or her income for the future as a bare minimum. This rule is so incredibly fundamental, yet only a small minority even bother to follow it.

2. Gold laboreth diligently and contentedly for the wise owner who finds for it profitable employment, multiplying even as the flocks of the field. If you invest your money well, your money will simply make more money. Again, a very simple and obvious rule, but one that many people never get to because they didn’t follow the first rule.

3. Gold clingeth to the protection of the cautious owner who invests it under the advice of men wise in its handling. This rule encourages cautious investing, or at least encourages the investor to at least be informed. In today’s era, one can turn to the internet for plenty of investing information.

4. Gold slippeth away from the man who invests it in businesses or purposes with which he is not familiar or which are not approved by those who are skilled in its keep. This goes hand in hand with the third rule: if you invest in stuff you don’t understand, you’re likely to lose money. Don’t buy the latest hot stock from your stockbroker; investigate and invest where you want.

5. Gold flees the man who would force it to impossible earnings or who followeth the alluring advice of tricksters and schemers or who trusts it to his own inexperience and romantic desires in investment. The worst option is to invest in anything that promises absurdly good returns, or anything that you’re heavily pressured into buying. These investments are scams and won’t stand up to serious research.

The five rules really are all you need to know: save some money, do some research, and only invest in the fruits of that research. Anything else is a sure way to fall behind.

The remainder of the book is loaded with similar tales, teaching basic principles of personal finance using stories from Old Babylon. Here are some of the other teachings found in the book:

A Part Of All You Earn Is Yours To Keep This is a hard lesson for many of us to learn, as most of us are ardent consumerists who are trained to spend from earliest childhood. The truth is that we need to learn to always pay ourselves before we pay our debtors – once we do that, we’ll be on the road to financial success.

Men Of Action Are Favored By The Goddess Of Good Luck I found this principle to be quite interesting, but also quite accurate. At first, you might take it to think that people who gamble sometimes end up big winners, but that’s not what this is all about. What the rule is saying is that people who succeed are the ones that do something. Even the most conservative of investments will pay better than cash stuffed in a mattress for a rainy day. If you do something, something will happen.

Better A Little Caution Than A Great Regret On the other hand, if you push too hard, you can get burnt. Highly speculative investments can turn around and bite you hard, leaving you as if you had never invested at all. Respect your principal and it will respect you by earning well; toss it to the wolves and you may get nothing back.

We Cannot Afford To Be Without Adequate Protection Retirement savings and insurance are both vital to ensuring that major accidents don’t derail everything that we do. If you don’t have these tools, a disaster can befall you, leaving you completely helpless.

Where The Determination Is, The Way Can Be Found Don’t give up on investing just because the road is bumpy. If you keep at it, eventually you will find a path to success. This is true no matter what you’re doing – persistence pays off time and time again.

The stories themselves are of varying levels of quality. There are two great stories, a fair number of middling ones, and a few that left me confused as to the reason for their inclusion. Many of the stories had overlapping concepts, but they were explained and applied in different ways.

In short, buy this book if you learn well from stories. If a well-told tale of the experiences of others is the way that you learn, this book will be very enlightening. I often learn this way, as I learned about totalitarianism from 1984 and objectivism from Atlas Shrugged.

On the other hand, don’t buy this book if you learn better from more fact-oriented publications. If you’re much better at following step by step instructions than by learning from observing others, The Richest Man in Babylon will not be a highly effective read for you.

As for me, I quite enjoyed some parts and found other parts dull. The good parts are well worth the time, but the latter half of the book seemed aimless, as if some lesser stories were tucked in to build up the book’s length.

I originally reviewed The Richest Man in Babylon in five parts, which you can find

The Richest Man in Babylon is the seventh of fifty-two books in The Simple Dollar’s series 52 Personal Finance Books in 52 Weeks.