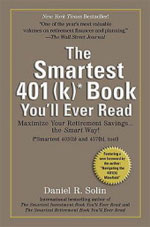 About a year ago, I reviewed Daniel Solin’s The Smartest Retirement Book You’ll Ever Read and concluded that it was a strong book to read if you’re a high income earner and concerned about retirement.

It was good enough, though, that I decided to keep an eye out for Solin’s other books and read them over time. Last month, I picked up Solin’s The Smartest 401(k) Book You’ll Ever Read in an effort to take a deeper look at the realities of retirement plans that many people use.

Does the book offer any real advice, or does it just rehash information that can easily be found elsewhere? Let’s dig in and find out.

Rules for All Investments
Solin’s real focus in this book, much like his other books, is that a successful investor focuses heavily on minimizing costs. You shouldn’t worry so much about short term return numbers on the investments you’re looking at. Look instead at things like expense ratios and the fees you’re charged. You’ll find that investments like index funds tend to stand out from the pack. Also, Solin urges people to avoid the hype for various funds out there in the financial media and instead focus on just the numbers.

401(k) Plans: Rigged to Rob Your Nest Egg
Here, Solin argues (quite well) that 401(k)s are fraught with risks. For starters, your employer often chooses a 401(k) plan that benefits them the most, not the plan that benefits you the most. In short, you’re usually going to get the short end of the stick with your work plan compared to what you could get on an open market. Companies know you’re restricted in your 401(k) choices, so they offer up relatively poor investment choices inside those plans. They’re expensive, fraught with conflicts of interest, and can make things even worse if you make poor investment choices.

How to Beat a Rigged 401(k) System
So what’s the solution? Lobby your employer for better options. Minimize the portion of your investment portfolio that’s actually in a 401(k) plan. Look for the lowest cost investments in the plan. Invest only enough to get all of your employer’s match, then look for other options. In short, don’t buy into the idea that your only way to save for retirement is through whatever options the “advisor” at work tells you to invest in your 401(k).

The Care and Feeding of Your IRA
What do you do if you don’t invest in your 401(k)? Solin recommends opening up an IRA, either a Roth or a Traditional depending on whether your income is low enough to qualify you for a Roth. An IRA gives you much more control over your retirement savings, as you get to choose the investment house rather than relying on what your employer has chosen. Look for an investment house that has very low fees (preferably none) and a diversity of investments that have very low expense ratios. I use Vanguard, for example.

403(b) Plans and Annuities – They Make 401(k) Plans Look Good!
403(b) plans are much like 401(k)s, but they’re often even worse than 401(k)s because the problems with 401(k)s are exacerbated with 403(b)s. With 401(k)s, employers are involved but are often looking for a balance of minimizing costs for themselves and providing good options for their employees. With 403(b)s, employers often don’t care at all about the investment plans, leaving greedy investment houses to offer up poor investments to subscribers. Not only that, 403(b) plans often push people into annuities, which are terrible options for such retirement plans.

Alternatives to Traditional Retirement Plans
What can you do? Solin offers a few options here. The most interesting, in my eyes, was to invest in things outside of retirement plans that return a consistent income, never mind the tax burden. He mentions lifetime annuities as one example.

Is The Smartest 401(k) Book You’ll Ever Read Worth Reading?
This book does a great job of making the case that your 401(k) plan at work is likely not your best investment option. If you take the ideas in this book and use them to evaluate your 401(k) or 403(b), you might not like what you find.

From there, though, Solin’s ideas for alternatives are spare and vague. He does offer some ideas, but he doesn’t offer an abundance of specific pointers to follow.

If you’re willing to use this book as a starting point for evaluating your retirement options and learning more, The Smartest 401(k) Book You’ll Ever Read is a very good choice. It is not, however, a one-stop-shop for everything you need for retirement planning.

Check out additional reviews and notes of The Smartest 401(k) Book You’ll Ever Read on Amazon.com.