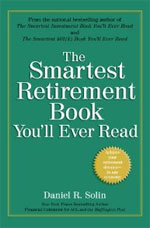 Daniel Solin’s series of The Smartest X Book You’ll Ever Read have turned me off for their title alone, and thus, to this point, I’ve not read them. The title set off a big “questionable investment planning” warning light inside my mind and, with a lot of other options to choose from, I just kept passing on books in this series.

As is often the case, though, a long-time reader emailed me and strongly encouraged me to give this specific book a shot, mostly because he felt it addressed retirement savings from new angles that he hadn’t considered before.

I do enjoy reading personal finance books, particularly ones that add new ideas to familiar topics, so I headed out to my local library and picked this one up. I do have to say that it did include some ideas and angles on retirement savings that were certainly intriguing and provided food for thought.

One | Rethink Retirement Investing
Right off the bat, Solin makes the vital point that if you don’t protect your portfolio against inflation, you’re going to run out of money much sooner than you would like. Inflation is a force that constantly pushes against your retirement savings, making every dollar you save today worth less when you retire. This is a particular problem for conservative investors who would like to keep their money low risk and “safe” – they won’t lose money, but they’ll often earn at a rate lower than inflation, which means the real value of their money is actually decreasing over time. The best solution, then, is to balance the two – keep a healthy portion of your money in stable things (like cash or CDs or savings accounts or treasury notes), but put some of it into other things with more growth potential that can keep your overall portfolio ahead of inflation.

Two | Stocks Made Simple
Individual investors shouldn’t invest in individual stocks (unless it’s just for fun) because the risk is just too great. You don’t want to bet your retirement on one company lest it turn out to be the next Enron. Instead, you want to mix it up: invest in broad-based index funds, some of them with lower risk and some of them with higher risk. So, for example, your overall portfolio might be 1/3 in cash or treasury notes, 1/3 in a total stock index, and 1/3 in an international total stock index. The key is to buy index funds for your investments – they spread out your risk while also keeping the fees very low. (I do this myself – I have my money with Vanguard.) Obviously, as you move closer to retirement, you’re going to want less of your money at risk, so over time you’ll migrate more and more to cash and treasury notes and less and less in stocks. One easy way to do that is to just buy “target retirement funds” which automatically handle that transition for you (again, making sure that these “target retirement funds” are made up of low cost index funds).

Three | Bonds Made Simple
Bonds are a great way to get solid returns in your portfolio with relatively low risk. Solin recommends that most investors should have at least some of their retirement money in a broadly diversified, low-cost bond index fund. It’s important to remember, though, that bonds aren’t riskless. They have less risk than stocks, but they’re not entirely free of risk. Solin also suggests that investors worried about inflation should not buy TIPS (Treasury Inflation-Protected Securities) because they’re very volatile and they earn very poorly in times of low inflation (like right now, for example).

Five | Annuities Made Simple
Solin is a big fan of immediate annuities – annuities in which you give a cash sum to an investment house and receive payments for the rest of your life from them. He argues that they greatly reduce the risk of outliving your money, even if the returns aren’t stellar. Another option is a charitable annuity, where you give a lump sum to a charity and they issue you payments for the rest of your life – this ensures that your annuity lump sum winds up in the hands of a charity you care about instead of a business. If you do get an annuity, though, Solin recommends a fixed rate annuity, not a variable rate one – they carry too much risk. Your annuity should have a fixed rate, period.

Six | Mining Your Money
Do not trust historical returns when you’re trying to figure out how much you can safely withdraw from your retirement each year. Instead, you should simply focus on withdrawing as little as you can get away with each year. Solin suggests aiming to withdraw between 2% and 4% of the total each year – I think that’s a great target (he offers some more math-intensive guidelines as well). He also offers a few exceptions to that “2-4%” rule that involve market timing, a subject that I don’t agree with him on (I don’t think market timing is usually a good move).

Seven | Simple Steps to Stretch Your Money
When you start taking withdrawals, withdraw from your taxed accounts first (like any ordinary savings or investment accounts), then deferred retirement savings accounts (like a 401(k)), then Roth IRAs last. Why? The longer money stays in a tax-deferred account, the longer it has to grow in value without Uncle Sam feeding off of it. If you have a 401(k), Solin recommends rolling it over into an IRA if you can because this gives you more control and the ability to utilize lower-cost investments. He also thinks converting your IRA to a Roth IRA (and everyone with an IRA can do this in 2010) is a good move for almost everyone, but particularly high income earners.

Eight | Social Security and Pensions: Critical Choices
If there is any possible way to delay taking Social Security, do it. If you can wait until you’re older, you’ll get higher payments for life. It can also adversely affect the quality of life of a spouse that survives you. Also, don’t bank everything on a pension because, as we’ve seen recently, companies sometimes aren’t 100% reliable in paying out the pensions they’ve promised. If you do have a pension, avoid taking the lump sum option (if you have it) and take monthly payments instead.

Nine | Is Sixty-Five the New Fifty?
People are living longer lives and staying healthy much longer. What this means, to put it simply, is that if you retire at the traditional retirement age, you’re going to have to cover many more years than the generations before you had to cover for themselves. The solution, of course, is a simple one: work longer. Turn your early “retirement” years into a continuation of your career or the crest of a second one. Don’t rely on age discrimination laws to help you, either – everyone is responsible for keeping their skills up and building their own paths.

Ten | Financial Lifelines for Desperate Times
What if you’re running out of money? A reverse mortgage (meaning you give your home’s deed to someone else and in exchange you receive regular payments) is an option, but it should be your absolute last one. Why? They’re expensive – they’re loaded down with tons of fees and you’ll get nothing close to what your home is actually worth out of it. Instead, seek other options. The AARP is a spectacular resource for the elderly, as are local churches and civic organizations.

Twelve | The State of Your Estate
Everyone needs a will, but a will has severe limitations that can hurt you if you’ve spent a lifetime building wealth. A better option for people with a high net worth that wish to pass on their money is to set up a living trust, assign their assets to that trust, and receive payments from that trust until they pass away, at which point their instructions for further management of the trust (i.e., who gets the money) is followed. Also, older couples are very well served by having prenupital agreements that specify that some assets get left to children when one member of the marriage dies.

Thirteen | Wolves in Sheep’s Clothing
If you need financial advice, be careful – there are a lot of sharks in the water. Avoid people who are offering you free things (like lunch) to listen to their pitch. Instead, seek out assistance on your own terms. Look for financial advisors who are fee-based, can explain things clearly, and aren’t seeking to constantly beat the market (such people often wind up way over their heads and you’re left holding the bag).

The book closes with a large handful of appendices and additional documentation for many of the points made in the book.

Is The Smartest Retirement Book You’ll Ever Read Worth Reading?
I think The Smartest Retirement Book You’ll Ever Read is a very strong retirement book for high income earners – the people who aren’t having to make hard decisions about whether to save for retirement or accomplish other life goals. It pretty much assumes you’re going to be socking away plenty and that your questions revolve around where to put it.

If you’re in that group, The Smartest Retirement Book You’ll Ever Read is a very worthwhile read. Solin keeps an eye on the real world (inflation, business failure, etc.) and explains the logic behind every move he recommends in a very clear and straightforward fashion.

If you’re really hitting your income stride and are looking for some sound advice on what investments to put your retirement money in, The Smartest Retirement Book You’ll Ever Read is a pretty strong choice for a good read, in my opinion.