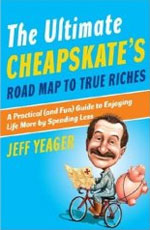 I love books on frugality, but they’re actually pretty rare – the personal finance section at your bookstore is pretty heavy on debt management and investing and extremely light on frugal living. Because of that, I’ve been eagerly anticipating this book by Jeff Yeager, a regular contributor to NBC’s Today show. On the show, he talks about ways to save money, ranging from the simple to the borderline extreme, and does it in a humorous fashion – interesting enough that my mother has thrice mentioned things that Yeager has talked about on television and suggesting that I write about it on “that web site of yours.”

Given Yeager’s segments on Today, I was expecting a funny, lightly-written book on frugality and personal finance that would be a quick read on a lazy Christmas vacation afternoon – and that’s exactly what I got. I read the whole thing in one sitting and finished with a smile on my face and a few ideas in my head. Is that enough for a strong recommendation, or is this just a book to flip through, smile at, and toss aside? Let’s dig in and find out.

Looking Into The Ultimate Cheapskate’s Road Map to True Riches

1. Introduction: The Money Step
The opening chapter was a humorous summary of the basic idea behind Your Money or Your Life. In Yeager’s words, most of us are trapped in a crazy, never-ending dance with our wallet, one in which we work hard to earn money, which we then spend on stuff that we convince ourselves that we need. The real trick is to figure out what we actually need and what is unnecessary. For most people, a good chunk of spending falls into that “unnecessary” area, and that’s really what frugality is about – determining what’s really in that “unnecessary” area and what’s not.

2. Fiscal Fasting: The First Step Down the Road to True Riches
Yeager recommends starting off your financial turnaround by not spending any money for a week. I applaud this idea a lot, and I’ve talked about doing a money-free weekend in the past on here (along with fifteen things to do, fifteen more things to do, and fifteen fulfilling things to do on such a weekend). The idea is to separate yourself from your spending routines. By stepping back from the diversity of ways that you spend money in a given week, you can begin to see which ones you truly miss and which ones you barely remember – and the ones you barely remember are the ones you can give up right away to put money in your pocket.

3. Six Golden Rules for Ruling Your Gold
For the most part, these six golden rules boil down to one thing: don’t buy something unless you need to buy it. The six golden rules are largely corollaries to this general statement: borrow things if you can (via neighbors or the library), don’t buy items to replace the ones you’re already using and are still working, and so on. Perhaps the best tip in the whole chapter is to focus on pinching dollars rather than pinching pennies: instead of burning a bunch of time trying to “optimize” the interest on your savings account, instead spend that time making sure you’re putting money automatically into a savings account to begin with.

4. Warning: Money May Be Hazardous to Your Health
Yeager focuses mostly on food in this chapter, and he makes the astute point that for the most part the dollar cost of healthy food is less than the dollar cost of unhealthy food. Thus, quite often cheapskates eat the healthiest diet – after all, fresh carrots and homemade whole grain bread is very cheap compared to a prepared meal from your grocer’s freezer aisle, and that’s not including the health and exercise costs as a result of eating unhealthy foods. One can even compare the McDonalds Dollar Menu to home prepared foods and find this to be true. However, Yeager does overlook one aspect of this: time costs. One big advantage of the prepackaged meals is the time investment – you can come home, throw it in a baking dish, toss it in the oven, and it’s soon done – very little effort required for a tasty meal so that you can channel that effort elsewhere (towards spending time with kids, for example). That’s the reason, for the most part, that I seek out time efficient ways to prepare and reuse food at home. I like mastering the art of leftovers and convenience foods.

5. Buy a Home, Not a Castle
Here, the topic is housing, and Yeager is firmly in the “buy within your means and pay it off ASAP” club. He also doesn’t believe in banking on your home’s value for retirement, which is definitely the correct lesson to take from the last year or so in the housing market. Instead, he advocates buying cheap, getting a “real” mortgage for it, then paying it off quickly through accelerated payments.

6. Slow Down, You’ll Get There Faster
If you figure all of the costs to buy and maintain an automobile against the income of the average American, you only get five miles of driving in your automobile for every hour you work. That’s a disturbing thought and one that I barely believed at first, but after running some numbers (using my wife’s Mercury Sable, which is more efficient than my truck) using the average Iowan’s salary, he’s actually right. In comparison, a bicycle is much more efficient, even including the speed difference. Let’s say you can average 15 miles per hour on your bike, but can average 45 miles per hour in your car. Over a 90 mile trip, you’re spending four extra hours on the bike compared to the car, but the cost per mile for the car is far, far higher than for the bike.

What does that mean? It means that for small distances, it makes a lot of sense to use a bicycle or to walk. This reduces the mileage on your car, making it last longer. Thus, if you’re going to the post office that’s a half a mile away round trip, take your bike – you’ll spend roughly the same amount of total time and you won’t put that extra mile on your car – or burn that extra portion of a gallon of gas – or inch that much closer to an oil change. Instead, you’ll get some exercise out of the deal.

7. An Amish Guy’s Guide to the Digital Age
This chapter deals directly with gadget lust, and it boils down to a handful of principles. First and foremost, wait thirty days before buying any gadget or electronic item. Second, ask yourself if it really fulfills a need in your life. Third, research the item carefully and know what you’re buying before dropping the cash. Fourth, ask yourself what the best thing that will happen if you do buy it and the worst thing that will happen if you don’t (this is usually pretty compelling for me). Fifth, ask yourself if the next generation of this product might be a better buy and worth waiting for.

I find that using similar principles almost always keeps me from buying things I don’t really need. One of my biggest challenges now is the knowledge that I can afford frivolous purchases quite easily – I can pay for most items I can think of in cash without blinking. So, instead, I just continually ask myself, “How does this really benefit my life?” and variations on that question. Hmm… maybe this would be a good article on its own soon.

8. Now That’s Entertainment
Right off the bat, Yeager pulls out one of the most valuable points from a book I discussed a while back, Daniel Gilbert’s Stumbling on Happiness. In it, Gilbert makes the assertion that most stuff tends to lose value over time, while most experiences retain their value through memories and such. Thus, if you have $2,000 in the bank and want to spend it to entertain yourself, you’re far better off spending it on a great vacation than on a flat panel television that you don’t really need.

Yeager then goes on to point out that many, many great experiences are cheap. I tend to agree, actually. While the best vacation I ever spent was with my wife on a honeymoon to England, I can’t honestly say that the massive extra expense compared to some of our other vacations (say, our camping trip on Mount Rainier above the snow line in summer) was worth it. In terms of bang for the buck, actually, my favorite vacation of all was probably a camping trip in the summer of 2006 – we made a road trip out of it and camped on the north shore of Lake Superior with our son when he was eight months old or so. We spent almost an entire week there and spent barely $100, but I remember it fondly (and the video of my eight month old staring wide-eyed out over the lake is one of my favorite captured moments of his life so far).

9. Getting Your Nest Egg Laid
What about planning for retirement? Yeager basically says that you should simply put away as much as possible, because most recipes for how much to put away really don’t do a good job of capturing the specifics of a financial situation. Since it never hurts to have more than you need in retirement, just put away as much as you can and then you know you don’t have to sweat it when you’re older.

This is basically the same conclusion that I’ve come to after trying to figure my “number” over and over again. Yeager’s specific investment advice (go for solid investments like bonds for much of your retirement) makes sense, but with the numbers that I’m socking away (I actually get warnings at work that I’m approaching annual contribution limits and stuff) and the long term of the investment, a little bit of short term loss is fine with me in order to be able to ride the elevator of a bull market or two over the next few decades.

10. Conclusion: Go Forth and Be Cheap
In the end, Yeager hits it right on the head. Frugality is about valuing time more than stuff. For some people, this seems surprising – how, then, can I talk about making homemade bread as a frugal experience? To me, cooking is a spiritually fulfilling activity, well worth my time invested in it even if it didn’t save us money (and, trust me, sometimes it doesn’t). In the end, it really is all about time – and making sure that you have the time to do the things that are valuable to you.

The Ultimate Cheapskate’s Road Map to True Riches is a light and very fun read on frugality. The humorous tone, self-deprecation, and solid advice mix together into a very enjoyable read, one that I enjoyed quite a bit – even more than I expected.

That being said, The Ultimate Cheapskate’s Road Map to True Riches is a book targeting beginners. It focuses on frugal ideas and tips that can easily be applied to an average American life, and most of the ideas are likely already being used by people who are in control of their money already.

If you don’t mind this, or you’re looking for a good, fun book to read on the basics of frugality, The Ultimate Cheapskate’s Road Map to True Riches is definitely worth reading. I certainly enjoyed it – not only was it a lot of fun, it was a quick read and I dug out a useful idea or two for myself.