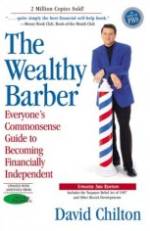 The Wealthy Barber has an almost unique premise among the top personal finance books: it is written in the style of a novel in which a group of siblings visits the barber in their hometown because they’ve heard that he has somehow become quite wealthy and they want to know how he did it on a barber’s salary. The story itself is a bit on the thin side, but it provides a readable overlay to the personal finance advice that the barber lays out.

Almost all of the story takes place in, unsurprisingly, a barbershop, where on a series of Saturday mornings, Roy (the proprietor) lays down the basics of personal finance to three siblings: Tom (the “loudmouth” character who questions everything), Cathy (the “successful” one, who already has a lot of money but isn’t strong on investing), and Dave (the author, who is basically “everyman”). Roy has become a millionaire due to applying basic personal finance management and he lays it out piece by piece to the three, who apply their own perspectives to the advice Roy has to offer.

In parts, this book reads like an educational film, with different characters saying almost predictible things and Roy often talking down to them (and to the reader). In other places, the book sucks you in with strong ideas, mostly because the concepts that Roy presents make a lot of fundamental sense.

In short, this book presents basic financial advice for the average person, written in language that won’t drive readers away with complexity. I would feel comfortable giving this book to anyone in my family, which hasn’t been true for most of the personal finance books I’ve reviewed in this series. Why? The writing really does make this book palatable to a very wide audience.

The first lesson that the group learns from the wealthy barber is the centerpiece of the book; Chilton refers to it as the ten percent solution. Simply put, the barber posits that he got rich by socking away 10% of his income each year. That’s pretty much the whole chapter in a nutshell.

This premise seems so simple and you hear it repeated so often if you look into personal finance advice that most people just sort of blow it off, but the reason it keeps getting repeated over and over again is that it simply works. There is no better way for a lower or middle income person to end up quite rich than to simply save a certain percentage of their income – and 10% is a nice round number. Obviously, more is better and less is worse, but 10% will leave you very well off in your later years.

Roy (the titular wealthy barber) goes through a number of investment options, but mostly sticks with fairly conservative vehicles for investing. The book recommends using mutual funds, particularly low-cost index funds. Within a few pages of that, the book strongly discourages investing in individual stocks, which runs in interesting contrast to how many people view an investment portfolio, as many finance books encourage a bit of investing in individual stocks as a “speculation” element to a portfolio.

The book also touches on real estate investment, not deriding it but not jumping up and down and recommending it, either. One of the characters does invest in real estate, but it’s not based on a strong recommendation from the wealthy barber.

Planning For The Future

Once the “ten percent solution” was covered, Roy (the titular wealthy barber) moves onto some other aspects of sound financial planning, mostly in terms of planning for disasters and for the golden years. The next two chapters focus on insurance, retirement, wills, and that other dreaded “r” word, responsibility.

First, the wealthy barber pretty much demands that everyone has a will. He recommends having it done professionally, because some situations may also call for a revocable living trust as well, and knowing the situation for each (or both) can be complicated. The barber’s insistence on this is so intense that it actually becomes part of the ongoing plot of the book.

Second, Roy lays out life insurance in a very intelligent way, indicating that you only need life insurance to cover your dependents, and if you don’t have any, there’s no need for insurance (as your estate should be able to pay for your internment). In other words, single people and children have no need for insurance because they have no dependents, but married people and (especially) parents need plenty. The book advises that your life insurance should be enough so that your entire financial commitment to the dependent’s life is replaced until they can become independent and it should be invested conservatively to return this amount (about 8% return). So, if you make $50,000 and you want that much to exist to cover your dependents, you need to have about $625,000 in life insurance.

As for insurance types, the book advocates term life insurance for reasons similar to the ones I discussed a while back on The Simple Dollar: if you’re planning well, you won’t need life insurance in your final years, so why pay for it?

So what does the book say about retirement? Basically, put as much as you can into retirement now. The specific options for investment are a bit outdated, so I won’t mention them now, but you should be dumping everything you can into your employer’s plan if they offer matching and maxing out a Roth IRA (this advice is based on the logic from the book, but Roth IRAs are newer than the book).

The remainder of the book mostly focuses on living purchases that we all make: buying a home, buying cars, and using credit. And just like earlier, Roy (that wealthy barber) is pretty conservative on how you should do these things.

First, he establishes that home ownership isn’t for everyone. Although it’s a solid investment, it might not be appropriate for people just starting out or people who can’t appropriately maintain their homes. In those cases, it may be better to rent. He also vaguely hints that you shouldn’t buy if the housing market looks soft… I’ll let you draw your own conclusions there.

What about the dreaded mortgage. First of all, shorter term ones are better. A fifteen year mortgage means a lot of savings. Also, it might not be smart to pay ahead on your mortgage, but it does have the advantage of being money that you can’t easily touch if you do pay ahead and it does reduce future interest payments. So why not pay ahead? You might be able to do better with other investments.

For things besides home mortgages, though, you should pretty much always pay cash. It’s substantially cheaper to do it this way (I’ve discussed this in detail before). Basically, he’s pretty hard on credit use of any kind, including credit cards; if you don’t have the money in hand to buy something, you shouldn’t buy it.

The book ends on a discussion of additional investments, but the detail here is rather thin. Mostly, if you have extra money to invest with after covering all of your bases, don’t be afraid to incur a bit of risk with that investment. Just make sure your bases are covered first.

I elected to include The Wealthy Barber in this series simply because it was recommended by so many people. When I first read it, I actually didn’t like it at all; the plot seemed incredibly flimsy and the visualizations in my head were a lot like some of the educational films made in the 1940s and 1950s in which people “discuss” an issue with incredibly stilted dialogue.

That being said, I really recommend this book to anyone who feels lost with personal finance issues. This book takes the very basics of personal finance and crafts them within a simply, highly readable, and easy to follow story. Anyone can read this book and come away with some basic ideas of how to improve their financial situation without being overly bored or lost in the details. If you know someone who could use a financial nudging, this book could make a tremendous gift.

Another challenge for me was that this book is clearly written for a very wide audience. The language and characters are both very simple, and given that my tastes in reading are voracious and rather literate, I almost cringed at the dialogue and characters in various places. I realize that the book is merely a way to sugarcoat basic financial issues, but it was nearly painful to read. This is not a book I would feel comfortable giving to someone with a high degree of literacy, even if they were having financial issues; I would choose a different title for them.

In short, this is a great, simply written introduction to personal finance issues, but for rich writing and for deep advice, you might want to look elsewhere.

I originally reviewed The Wealthy Barber in five parts, which you can find

The Wealthy Barber is the eleventh of fifty-two books in The Simple Dollar’s series 52 Personal Finance Books in 52 Weeks.

Latest from Trent
How To Navigate Taxes as a Freelance Worker
The Role Personal Finance Plays in Your Life
12 Ways to Turn Frugality Habits Into a Game
Read more from Trent
Featured on: