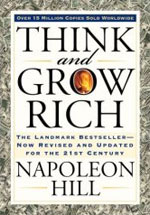 With the exception of Rich Dad, Poor Dad, no single book has been asked about in reader emails more than Think and Grow Rich. It was arguably the most widely circulated book of the 20th century on the topic of personal success.

I have been rather troubled with regards to reading and reviewing this book for two big reasons: the people who promoted the truly awful book and movie The Secret almost universally pointed to this book as inspiration, and the first person who ever put a copy of Think and Grow Rich was perhaps the biggest “get rich quick” huckster I’ve ever met. In other words, the people that introduced me to Think and Grow Rich represent worldviews that I find deeply destructive and misleading.

Did the material in this book overcome that negative start? Or is Think and Grow Rich merely a handbook for schemers? Let’s find out.

Leafing Through Think and Grow Rich

Thoughts Are Things
The opening chapter is merely a series of anecdotes where a person’s thoughts, in various ways, resulted in real world effects, and not in the sense of a brilliant new idea, either. Instead, the focus of these tales is that of determination and desire, attributes that pretty much anyone can have.

Step 1: Desire
After the first chapter, I felt some pretty serious trepidation about the remainder of this book, so I read on with some caution, fearing that the first step in this path to success was merely to want something. Not so. Hill basically says that one should use deep desire as a goal. Is there a job you want? An amount of money you want? Define that goal clearly, then set down a specific plan to get there. In a nutshell, this isn’t really different than many of the financial planning topics I talk about on The Simple Dollar.

Step 2: Faith
By faith, Hill isn’t really referring to belief in a higher power, but instead faith that the future holds better things for you – a truly confident outlook. If you take to heart the perspective that the future holds greater things for you – or any other greater belief that you hold – then your future has a greater likelihood of holding these things. Why? They’re consistently on your mind – thus you pay more attention to the factors that will make them happen.

Step 3: Autosuggestion
Although the title of this chapter screams “scam” to me, I was surprised to find that I actually already use most of the ideas within. Basically, the idea is that if you keep repeating your plan for success to yourself, it has a greater chance of actually coming true. Why? Again, embedding a thought deeply within yourself – and repetition does the trick – increases the chance that the thought will come up at the right time when you need it. Think of it as cramming for a college exam – you study a ton hoping that the right answer will come up when you need it.

Step 4: Specialized Knowledge
Guess what? Getting an education is important, whether it’s a formal education at an institute of higher learning or merely an education at the hands of a mentor. I tend to find that finding a mentor is often really useful for figuring out exactly how to succeed in a certain area, even if you do have a strong formal education.

Step 5: Imagination
Another key element is imagination, or the ability to take a vague idea and transform it into something concrete. I think that, for many, this is one of the key stumbling blocks on their path to success. They see the goal, they see where they are at now, but they lack the imagination to construct the path between here and there. How can you do it? Break it down. Just focus on figuring out the next step, and then the step after that and the one after that…

Step 6: Organized Planning
This chapter is a large mishmash of various ideas on how you can effectively “plan” to be successful – in other words, put other pieces into place beyond just thinking about it that will lead to success. First and foremost, one should surround themselves with a team of support – people who have both knowledge of how to go down the path you want to go, but also care about helping you. Second, write a killer resume that will get you the job you need to start building towards success – Hill even recommends internships, though the language to describe it doesn’t really seem to have existed when this book was written. Third, step up to the plate often and regularly and get the job done well. Finally, practice the traits of leadership, of which Hill lists an abundance. This was a very strong chapter, one that did quite a bit to overcome the slight trepidation that I felt about many of the other chapters. I felt this chapter was key to the whole book, a reminder that in the end, your dreams do take hard work (though a good mindset helps a great deal).

Step 7: Decision
When it comes time to make decisions, make them. Don’t defer to others and don’t delay the decision. This is perhaps the biggest part of becoming a leader and a person that people will depend on and follow. It’s fine to gather information, but when the time comes, be decisive: come up with a firm decision and stick with it.

Step 8: Persistence
Persistence means that you know you’re following the right path for you and that you won’t allow a few mis-steps or stumbles along the way keep you from achieving your goal. Many people give up the first time they’re dealt a blow, but sit down sometime and read a biography of a great leader and see how many times they were knocked down – and how viciously it happens. I recently read a great biography of Winston Churchill and I was actually stunned how true this was in his life – he had a lot of missteps and at least one complete collapse (where he basically had to start again from square one) during his political career, but he was persistent about it and eventually wound up as Prime Minister. Don’t let some bumps in the road keep you from following the path, even if they seem like huge stumbling blocks that you are going to have incredible difficulty surpassing.

Step 9: Power of the Master Mind
The title of this chapter set off warning bells, but it actually just refers to being able to pick the minds of others for ideas, and often sharing them in fair exchange. You remember the suggestion for surrounding yourself with people who can support you? This group should include as many smart people that you know, especially ones that you trust well enough to bounce ideas off of. Basically, find the smartest people in your life that you trust, and utilize them to help you think through your plans.

Step 10: The Mystery of Sex Transmutation
This chapter was perhaps the vaguest in the book; it advises tapping into your sex drive in order to drive yourself to further success. The book offers several tips on how to do this, but I generally feel like many of those would lead to frustration for many people rather than success. For me, the love and support of a caring partner is reallly the best spur to success that you can really have, regardless of the details of one’s sex life.

Step 11: The Subconscious Mind
Whenever you think a negative thought about your dreams, immediately and forcefully remind yourself that not only is such a thought a waste of time, it actually just pulls the dream out of your grasp. Instead, make an effort to think in positive ways about your plan, slowly training your mind to not pull up negative thoughts about achieving what you want to achieve.

Step 12: The Brain
Although the terminology is as fuzzy as can be here, the basic idea is that most people send a lot of nonverbal cues about what they’re thinking, and putting extra effort into trying to pick up on those cues can pay enormous dividends. I will say that quite often I have a terrible time with nonverbal cues that others give me – perhaps that’s why I enjoy blogging so much, because I don’t really have to worry too much about nonverbal cues.

Step 13: The Sixth Sense
Again, buried under a lot of New Age-esque terminology is a really simple idea: meditate. Simply sit back, close your eyes, and let thoughts slip away. Once your mind is empty, the chapter gives a number of things to think about, but I often find that some of my best ideas come from the moments when I really do let all of my thoughts completely slip away from me – the good ideas just appear.

The Six Ghosts of Fear
The six primary fears that fill people’s lives and keep them from being successful are poverty, criticism, ill health, lost love, old age, and death. However, if you let those constantly guide your life, you’re bound to not reach your dreams. I largely agree with this, especially if a person is single and does not have people relying on them for support – if I were single, I’d be much more willing to go through a period without health insurance to build my dreams, for example.

The problem is that this book winds up being all things to all people. The stuff Napoleon Hill talks about is merely an amplification of what you already believe and value. That’s because this book is really only about one thing: confidence. The answers for what most people need to do in their life are already in their own heads – this book is just about the confidence to get there.

So what sets it apart from The Secret? Think and Grow Rich doesn’t ever imply that merely thinking about something makes it happen – Hill repeatedly states that it’s a matter of confidence and keeping your eye on the prize, not a matter of just dreaming about it.

So, I agree with the theme behind Think and Grow Rich – the idea that self-confidence and keeping your eyes on the goal are big parts of success – but they’re only a few pieces of a much larger puzzle.

In short, if your primary challenges in life are a sense of focus and a sense of feeling that you actually can achieve your dreams, read this book – but if you’re already confident and still aren’t making it, you may need to look for other answers to solve the problems in your life. For example, my biggest challenge in life is primarily time, so I didn’t find this book to be strongly valuable.

Either way, given that millions upon millions of this book have appeared in print over the last seventy years, it’s a perfect one to find at the library or using resources like PaperBackSwap.