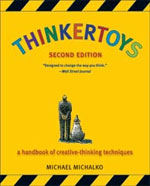 Several times a week, I get an email from a beginning blogger who asks a number of questions about how to get started with their own blog or their own fledgling writing career. Usually, I point them towards my series on building a blog, but there’s one question that I have a very hard time answering directly.

That key question, the one that really drives The Simple Dollar, is where do I come up with all of the ideas? I manage to post twenty five times a week and while a few of them may seem redundant to long-time readers, most of them are reasonably good and new ideas. Given that I spend so much time writing just to get them out there, how do I possibly have the time to come up with so many ideas so quickly?

The real answer is that I spend a lot of gap time (time spent doing things like commuting, waiting for appointments, and so on) formulating new ideas for The Simple Dollar. I try a wide variety of different techniques for coming up with ideas, from watching people to thinking about my own recent behavior, but the things that really get me going are simple creative thinking exercises that I’ve picked up over the years.

Thinkertoys is the best single collection of quick creative thinking exercises that I’ve found in a single book, ever. It’s not a be-all end-all compendium of these exercises, but many very good ones are in the book, including a few great ones that I knew before reading it and several more that I added to my repertoire after reading it.

So what’s inside? Are the exercises actually good, or am I a flake? Let’s dig in and find out!

Looking Into A Box Of Thinkertoys

Most of Thinkertoys (excepting a “think positive” introduction) is a series of chapters that outline specific creative thinking exercises. I picked out five of the chapters (there are roughly thirty five of them) and have outlined them below to give an idea of the contents of Thinkertoys.

SCAMPER refers to taking any specific idea and asking a series of questions of each specific part of the idea:

Substitute something.
Combine it with something else.
Adapt something to it.
Modify or Magnify it.
Put it to some other use.
Eliminate something.
Reverse or Rearrange it.

Here’s an example. Let’s say I make $35,000 a year and I have two debts, a $20,000 debt at 10% and a $15,000 debt at 8%. I also want to buy a house in 5 years. What should be my plan? I start moving through this situation, determining that with such high interest rates, debt repayment will put me in the best position to buy a house in five years because the debts are so large in comparison to my salary. But what changes if I substitute a higher salary? Why does that change happen? What if I reduce the interest rate on both debts? Why? When I start mixing up a scenario like that, I start to come up with some pretty interesting questions that usually form the nucleus for new writings.

Quite often, we have giant, grand ideas that are far too nebulous to really implement. I’ve often thought of series for The Simple Dollar that, if I implemented them, would go on to be series with a hundred posts. That doesn’t mean that the idea should be discarded; it just means that you need to break it down a little bit.

A “lotus blossom” is easy. Just state your main idea, then surround it with a series of six to eight bubbles that each state a specific element of that general idea. So, let’s say I was going to write about mutual funds. I might surround this idea with individual elements like fees, how they’re taxed, how dividends work, fund types, investment strategies, and so on.

Then, take each of these individual ones and use it at the center of its own blossom. So, I might have a blossom that starts with “mutual fund investment strategies.” I would then mention tax-deferred accounts (like 401(k)s or 403(b)s), ETFs, self-managed accounts, and so on. I might then start some lotus blossoms from these individual leaves, too. Then, I go through and just cross off ones that I’ve either already written about in detail or don’t find too interesting.

Using this can break down a very general idea into lots of specific ones. I find this to be very powerful when I do a theme week (like the mutual fund week I did a while back) or a long series like 31 Days to Fix Your Finances.

Remember that scenario I talked about earlier, with the two debts and the desired house? I often start my brainstorming with a very simple scenario like that and use various techniques to mine ideas from it. The “future fruit” technique is actually very useful for illustrating things like risk.

Here’s how it works: once you have a basic scenario in place, like the one I talked about with the debts, imagine where that person might be in five years. Make a list of several different potential outcomes. What happens if he loses his job? What happens if he is left a giant inheritance. What happens if he suddenly gets married and has two children? Imagine what will happen to our little straw man if these things happen to him.

Envisioning a large number of potential outcomes for a scenario helps you to plan for as many outcomes as possible in great detail. This is a brilliant exercise for any scenario in your own life, or any situation that you can imagine.

I’ve used this technique to develop ideas for many years and it always produces something that is at the very least interesting.

Here’s how it works. Let’s say you have a general topic in mind that you want to write about. For The Simple Dollar, that topic is usually personal finance related.

Then simply sit back and come up with a random word. What I usually do is grab a magazine, flip open to a random page and glance at the first word I see on it. I then attempt to mix that word in with what I already have in my head.

Here’s an example. I was trying to come up with a post about frugality, but nothing was coming into my head. I was literally standing at a newsstand about a week ago, so I reached over, picked up a random periodical, and opened it to a random page. I glanced through it very fast and the first word that stood out at me was golf. That got me thinking about golfing and frugality and some of the things I’ve done to save money golfing and

this was the end result.

This is an idea I’ve turned to more than once when I’ve been very desperate for ideas. It’s completely wacky, but it has bailed me out a few times in the last few months.

All you do is set your alarm for a half hour earlier than usual, then go to sleep with a notepad beside your bed. Setting your alarm early means that you’re more likely to be woken up in the midst of a dream than when your subconscious is beginning to realize that your normal “wake up” time has arrived.

When the alarm goes off and you first struggle into consciousness, try and hold on to any dream that you might be having. Lay there for a minute and concentrate on remembering as much of the dream as you can, then sit up and jot down as much of the dream as you can on that notepad. Record details. Then, after a bit of time has passed and you move through your morning routine, get a general topic in mind and return to that dream, attempting to connect the dream details to the topic.

I’ve found a few gems this way that have turned into some really interesting posts. This

post about my grandfather’s garden was pure dreamscape. I had a dream where I was a little kid again in his garden and he was there chasing me with a sprinking can, but in a fun way, and I could hear my grandmother telling us to come in for biscuits. The garden was really wet and muddy and I could smell compost – it was so strong that I actually felt like I could still smell it when I woke up. That dream, along with a bit of research and reflection on my grandfather, became

If a significant part of your life requires creativity, particularly creativity that is attached to solving real-world problems, this book is tremendous. It offers tons of creative exercises along with a lot of detail on how to really squeeze the juice out of each one. It’s basically a book where you can sit there and try several specific techniques on each page as you read it.

My biggest complaint about Thinkertoys is that it often is written as though the reader is a businessperson, even though the techniques seem to work well for any creative position. This tone, particularly when obsessing on sales, is a bit of a turn-off – I think the writer was trying to take some very useful techniques and mold them directly for businesspeople who may be a bit weak in getting started with creative thinking.

Aside from that, though, this book is truly wonderful for teaching techniques that can help produce ideas. If you do anything in your life that requires that you come up with ideas, Thinkertoys, perhaps coupled with Made To Stick (which I also enjoyed), is a wonderful and very useful read.