Every other Sunday, The Simple Dollar reviews a personal development, personal productivity, or entrepreneurship book of interest. 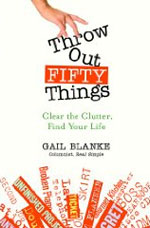 Whenever I see clutter, I see money lost. For one, the clutter itself is usually made up of unused items that have value. Books, decorations, games, DVDs, and so on – they all cost money to purchase and many have at least some degree of resale value. For another, clutter takes up time, and time is money. It takes longer to find things. It takes longer to clean. It takes longer to rearrange and to organize.

Thus, over time, I’ve begun to look at clutter as an enemy of sorts. Stuff that just takes up space, particularly stuff with very limited aesthetic appeal, is stuff that can easily be eliminated.

That’s not to say that I’m entirely successful in my war on clutter. There are many places in our home that are quite cluttered (starting with my office, for example), but I often have difficulty sifting through that clutter and determining what exactly I should keep – and what I should get rid of.

Throw Out Fifty Things by Gail Blanke offers an interesting solution in the title itself. Blanke’s premise is that by going through your cluttered spaces and choosing fifty things to get rid of, you push yourself through the psychological barriers that cause you to create clutter in the first place.

Blanke identifies four key rules of disengagement (how to decide what to get rid of):

One. If it – the thing, the belief or conviction, the memory, the job, even the person – weighs you down, clogs you up, or just plain makes you feel bad about yourself, throw it out, give it away, sell it, let it go, move on.

Two. If it (see above!) just sits there, taking up room and contributing nothing positive to your life, throw it out, give it away, sell it, let it go, move on. If you’re not moving forward, you’re moving backward. Throwing out what’s negative helps you rediscover what’s positive.

Three. Don’t make the decision – whether to toss it or keep it – a hard one. If you have to weigh the pros and cons for too long or agonize about the right thing to do, throw it out.

Four. Don’t be afraid. This is your life we’re talking about. The only one you’ve got for sure. You don’t have the time, energy, or room for physical or psychic waste.

An interesting start, but is there more meat on the bone than that? Let’s dig in and find out.

Getting Rid of the Physical Stuff
Throw Out Fifty Things starts with a room-by-room walkthrough of one’s house (bedroom, bathroom, kitchen, living room, dining room, attic, and garage), highlighting lots of specific areas and specific tactics for getting rid of clutter.

A few particular themes seem to come up throughout this section.

First, memories are in your head and in your heart, not in items. Many people have closets crammed full of things that are kept for sentimental reasons, but they’re things that will almost never be looked at again – and when they think about the prospect of digging through all that stuff, it’s not a happy thought. So suck it up and go through it. Find the stuff that you’d actually like to have out and about for decoration because it really gives you a positive feeling – then chuck the rest. Seriously.

Second, just because you used an item a lot in the past doesn’t mean you have a use for it now. You read that book a year ago, spending an hour with it each night for weeks – and now it’s finished. Will you ever read it again? If not, toss it. Apply that same litmus test to everything you remember using frequently in the past – will you use it frequently again?

Another regular theme: digitize it. Got old documents in boxes taking up space? Scan them in and burn the originals. Got lots of old pictures in photo albums? Scan them in and share the digital images with your friends.

Your Office: Paring Down the Professional Clutter
Here, the “digital” theme really comes to the forefront. In a professional environment, there’s really not an extensive need to maintain a huge amount of printed documents – they take up space and are very cumbersome.

Blanke encourages anyone in an office environment to digitize everything they can. Scan documents, make sure they’re searchable (most modern scanners do this, enabling you to save a scanned document as a searchable PDF), and save them in a place that’s backed up regularly. You can turn boxes and boxes and boxes of documents into digital files stored on a hard drive – and it’s now searchable and much easier to use.

Yes, this takes a lot of time. It’s a tremendous project, in fact, but if you feel like you’re simply overrun with documents in your office, this is the way to go.

Another interesting tactic: get rid of old digital files that are simply outdated. Stick them in an archive folder somewhere and simply forget about them. I’ve found that most presentations and documents that are more than a year old or so tend to age quite seriously, so it’s usually best just to archive them (in case you ever need them again for some reason) and get them out of the way. Out of sight, out of mind – and you’re ready to create new ideas.

Attacking the Mental Mess
Here, Throw Out Fifty Things dips heavily into the “power of positive thinking” realm. Blanke argues that mental clutter is just as limiting as physical clutter and encourages people to get rid of it. A few examples:

“Throw out” negative terms you use to mentally describe yourself. Instead, focus on the positives about yourself. Visualize situations where you come through and succeed instead of imagining scenarios where you fail.

Let the past be the past. Particularly failures. Once you’ve failed, reliving it does nothing but bring you down. Absorb the lessons you can, then move on – don’t think about the mistakes you once made.

You’re not perfect. No one is. Stop focusing on your little mis-steps – they’re going to happen. Instead, work on preparing yourself for success in the future. Picture yourself doing everything right in the future.

You’ve grown. You’re not the same person you were ten years ago. Look at the things you define as your true interests and passions. Quite often, many of these things simply don’t match up with our self-definition. That means it’s time to toss out those old impressions.

Stepping into the Clearing
Once you’ve eliminated the clutter, what’s left? It’s likely much more minimal than before with just the essentials left behind. Those essentials are a fertile breeding ground for some essential redefinitions of your life.

Things that reflect who you are. If you strip things down to a minimal home decor, you’re left with only items that make you feel positive. From this state, you can be very careful about adding new things – again, add only stuff that contributes to your overall positive sense.

Culture that reflects who you are. Perhaps you’ve realized you’re no longer passionate about alternative rock and now you’re interested in personal development. That means you ca stop using mindspace for those old things and devote your time and mental energy to the areas that reflect where you are right now.

Ideas that reflect who you are. Getting rid of the many things cluttering your mind and your life frees you up to explore new ideas that previously intrigued you. Your kitchen is clear of clutter, your time is free of unfulfilling activities, and your mind has let go of old concepts – time to learn how to cook.

Is Throw Out Fifty Things Worth Reading?
Take a look around you. Do you feel happy about what you see? Are you surrounded by things that provide real value to you and are easy to find, or are you surrounded by mountains of stuff (and simply looking at that stuff makes you feel bad)?

Throw Out Fifty Things is a very thought-provoking book if you find yourself in the latter camp. If you can actually get out of the chair and do the things that Blanke suggests (and in this review, I’ve mostly just focused on general themes – there are a lot of great specific tips in the book), you’ll go a long way toward improving the environment around you and the environment in your head, too.

Loading Disqus Comments ...
Latest from Trent
How to Use an Impact-Effort Matrix For Your Finances
The 7 Most Common Personal Finance Questions, Answered
Everything You Need to Know About Mortgage Brokers
Read more from Trent
Featured on: