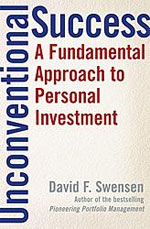 Of all the places I could possibly find out about a book, I was introduced to Unconventional Success by a column by Gregg Easterbrook at ESPN.com. A column about the NFL. Seriously.

Easterbrook typically writes a fairly eclectic column – and an entertaining one that touches on a lot of issues outside of football. I read his column each week to keep tabs on the NFL – I’m not much of a football fan, but virtually every other male in my office is (as are most of the females, seemingly), so I try to keep up to date because, as

Anyway, back to Easterbrook. Here’s what he had to say about Unconventional Success in his January 24 column:

Harvard has so much money because it’s Harvard; Stanford has a mega-endowment because the school was in on the ground floor of Google stock. Why does Yale have so much money? Because its endowment is run by remarkable money manager David Swensen. Yale’s endowment has returned almost 16 percent per annum since Swensen took over in 1985, a much better long-term track record than that of any hedge fund or similarly hyped investment vehicle. In fact, it’s a much better return than the investments made by places such as Merrill Lynch, where the executives award themselves hundreds of millions of dollars for their supposed astonishing expertise. Swensen is even a decent human being, paying himself far less than he could earn on Wall Street. A decent human being in the money-management profession, how did that happen? Swensen’s 2005 book “Unconventional Success” is also the best personal-investment guide on the market. Unlike the phony junk in the get-rich-quick aisles of bookstores — “How to Become a Billionaire in Twenty Seconds with Nothing Down” — Swensen’s advice is specific and practical. I commend “Unconventional Success” as containing all that most people need to know about rational investment decisions and retirement saving.

That’s a heck of an endorsement, and considering the stature of the book’s author, David Swenson, and the accuracy of Easterbrook’s comment, particularly in calling out the phony personal finance junk book of the week, I was quite excited to pick this one up. Did the book really merit this kind of glowing review, or is it just another case of overhype? Let’s dig in.

A Deeper Look at Unconventional Success

Overview
Unconventional Success opens with an assertion that an individual investor has only three tools to work with when making an investment choice:

Asset allocation refers to the general area where you put your money and how you divide it up. For example, if you decide to put 80% of your money into stocks and 20% into bonds, that’s your asset allocation.

Market timing refers to when you make changes in your investment based on the conditions of the market. For example, if you decide to wait a month because you think the market is going to go down more between now and then, you’re practicing market timing.

Security selection refers to the individual choices you make within your asset allocation. For example, if you take the money you’re going to invest in stocks and put half of it into Apple stocks and the other half into the Vanguard 500, Apple and VFINX are your security selections.

In effect, Swensen argues that all investments boil down to these three decisions, and he spends the book looking at each one in detail.

So, the first question: where should an individual investor put their money? Swenson argues in favor of six “core asset classes,” where strong and reliable gains can be found, and argues against investments that fall outside of those classes.

Portfolio Construction Swenson basically ranks the core asset classes by risk, with developing market stocks being the riskiest and the TIPS and treasury notes being the least risky. A good portfolio should have some of each to hedge against various changes in the investment world. How much of each, though? The further out your time horizon (in other words, how much time will pass before you begin tapping it), the more you should have in the riskier investments and the less in the conservative ones. If you’re in for over ten years, Swenson encourages you to maximize your risk because you have time to recover and the payoffs are enormous – in other words, buy a lot of stocks, esp. foreign securities.

Non-Core Asset Classes What about other investments, like municipal bonds? Swenson goes through a whole pile of these and basically says don’t bother, other than in a few very specific and rare cases. For almost every investor, the core asset classes will be enough. Only when you begin to accumulate huge amounts of wealth should you consider other assets.

In a nutshell, Swenson encourages people to invest in stocks, U.S. government backed bonds, and real estate, period. In those, one should have more risk the further out the timeline is – if you’re not going to need the money for a while, feel free to get a little risky.

Swenson says right off the bat that active market timing is terrible – if you’re trying to time all of your investments by the daily or weekly jumps and falls of markets, you’re going to get burnt.

Chasing Performance Do not chase performance. If some mutual fund or some investment is promising returns far and beyond what the market can provide, know that it will correct over time and you’ll get burnt. Instead, define your philosophy for investing right off the bat and stick to it. Don’t hop around chasing the hot thing or else that hot thing will burn you badly.

Rebalancing So, you’ve got your philosophy, you’ve figured out how you’re going to allocate your money, you’ve made your purchases, and now you’re sitting back watching things grow. What do you do if one of your assets grows faster than the other? Swensen is a big proponent of rebalancing on a regular schedule – in other words, every 3, 6, or 12 months, sit down and make sure that the current proportion of your investments is the same as your original plan. If it’s not, then you should contribute additional investments (if you can) or move investments around (if there aren’t any tax implications) so that the proportions again approach the original plan.

Security Selection
For the most part, this final section of the book just argues that actively-managed mutual funds are a poor investment over the long haul. Instead, Swensen encourages people to invest in low cost index funds that match up with your investment goals. This is basically the same exact philosophy espoused by John Bogle (in his strong book Common Sense on Mutual Funds, and a philosophy that shows up again and again in many other books.

Buy or Don’t Buy?
Unconventional Success essentially makes the case for “common sense investing,” the term often used for the idea of investing in a well-designed portfolio of low-cost index funds. The only problem is that a lot of books make that same case. How does Swensen’s book stand out from the crowd? Three things:

First, Swensen has walked the walk on a big scale. He’s actually practiced this methodology with great success in a very public way. He’s managed Yale’s investment portfolio with these principles and, because of that, Yale’s got a lot of money.

Second, Swensen writes with great intellect. Unconventional Success is written for a well-educated reader. Swensen uses the richness of language to describe concepts with great depth, something not often seen in personal finance books. For me, this was refreshing.

Third, Unconventional Success breaks it down in an interesting way. By focusing on the perspective of three tools (asset allocation, market timing, and security selection), he really simplifies something that can be overwhelming for the beginning investor.

Swensen’s book does not offer a compelling new vision for investing or personal finance. Where it does succeed, though, is a basic yet thorough and intelligently written explanation of the widely-accepted “common sense” investing philosophy. Even though I didn’t learn anything significantly new as compared to my earlier readings, I enjoyed the book quite a bit, mostly because of the elegance of the writing and the solid perspective on the ideas.