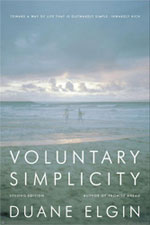 For many of us (myself included), one of the biggest motivations for getting our personal finances in shape is to give us more control over our lives. A big part of financial recovery is simply being mindful of your choices: your spending choices, your choice of possessions, your choice of how you spend your time.

For me (and for a lot of you, too, based on reader emails and comments), some of the motivation for this kind of mindfulness about life choices goes beyond the merely financial. We’re concerned about continued use of fossil fuels, both as an environmental concern and as a national security concern, so the choice to drive less is doubly or triply motivated when we consider the financial savings, too. The expense of a huge house, both in terms of the financial cost and the materials involved, when many of those rooms will go unused seems silly, so we choose to live in a smaller home both for financial and for more global reasons.

An awful lot of frugal living is tied to these kinds of global concerns for people. We’re all conserving our money and resources so we can direct them in ways that are more meaningful to us.

That’s the basic idea behind Voluntary Simplicity by Duane Elgin, a book I’ve mentioned several times on here but never reviewed (until now).

Why did I choose now to review it? Honestly, I’ve received a lot of emails from people living along the Gulf Coast who are extremely upset with the ongoing environmental disaster there. So many people are simply saying that something needs to change in the world and my response is always that change starts with you.

I think this book sums up that idea better than any book I’ve ever read. By consciously choosing a simpler life that contains the type of richness that you hold most dear, you can go a long way towards not only preserving your financial resources, but you’re also living a life in line with what’s most important to you and also blazing a trail for others to follow.

Voluntary Simplicity by Duane Elgin is a book that’s a little off the beaten path of what I usually talk about on The Simple Dollar, but it has had a profound impact on my thinking over the last few years.

The idea behind this book, in Elgin’s words, is “a conscious simplicity that represents a deep, graceful, and sophisticated transformation in our ways of living – the work we do, the transportation we use, the homes and neighborhoods in which we live, the food we eat, the clothes we wear, and much more.” In other words, it’s all about reflecting upon every choice we make in life, asking ourselves whether that’s honestly what we want from ourselves and for the world around us, and working to make stronger choices in each of those areas. Often, that comes hand in hand with spending less money and, often, with earning less money to do more fulfilling work, too.

For me, the biggest benefit to simplicity is time. The less stuff you have, the less time you have to spend cleaning it and maintaining it and feeling obligated to use it. The fewer time commitments you have, the more time you spend applying yourself to things actually important to you.

Two | Pioneers of Green Living
“The character of a society is the cumulative result of the countless small actions taken day in and day out, by millions of persons,” says Elgin on page 26. That’s also true on a much smaller scale. Your character is the cumulative result of all of the small actions you take in a given day or over your lifetime. What, exactly, is your character?

Most of this chapter is filled with individual anecdotes from people attempting to adopt a simpler lifestyle, mostly in an effort to have their time and their efforts and their purchasing decisions fall in line with their personal values (whatever they may be, because they certainly do vary a lot). Take me, for example: I could buy a Brooks Brothers suit, but my most recent clothes came from Goodwill. Why? Well, why not? They’re perfectly good clothes. My son is rocking next to me right now and he’s wearing clothes from a consignment shop. Why? They’re perfectly good clothes.

Three | Living Voluntarily
The most interesting part of this chapter (for me) was the difference between involuntary and voluntary simplicity. Take two people riding a bike to work. One person could afford a car and is riding the bike voluntarily – he’s happy with his choice. The other is forced to ride a bike because of economic reality – he loathes his choice. Outwardly, they appear the same, but inwardly they’re in very different places.

Elgin’s argument is that by voluntarily riding a bike and conserving his economic resources, the voluntary rider is causing a ripple effect that will eventually benefit everyone in some small way. The money he saves in the bank might be invested in a startup business or donated to a charity. In either case, a boost is given to people who really need it and that boost has a positive impact on their lives and, by association, the lives of everyone associated with them. It pays forward and eventually improves the world, often in indirect ways that we never see.

It takes practice to think this way about every action we take, but the more we do it, the more natural such thinking becomes.

Four | Living Simply
The simplest way to think of living simply is to ask yourself whether a choice promotes activity, self-reliance, and involvement or whether that choice promotes passivity and dependence.

You’re at the store. You can either buy a box of au gratin potatoes costing $2 or you can buy a handful of potatoes and an ounce or two of cheese for $1. Which is the better choice for promoting activity, self-reliance, and involvement and avoiding passivity and dependence? The potatoes and cheese cost less, promoting financial self-reliance. They also promote self-reliance because you’re preparing a dish from scratch instead of opening a box. The boxed food promotes dependence because you’re not learning how to prepare a dish, you’re learning how to follow directions provided by a corporation.

Five | The World at the Tipping Point
There are a lot of global problems. Poverty. Environmental destruction (one only needs to think of the Gulf oil spill). Peak oil. Overpopulation. Human conflict. What impact can we have?

The amazing thing is that many seemingly enormous events are often unbalanced by small acts. You and your friends stop buying soda and start to get into better shape. This has an impact on local soda sales, affecting the bottom line of the large soda companies. Others see that you’re avoiding soda and decide themselves to do the same. It shows up as an alarming blip in their sales data, so they start to think of alternative beverages and business models for their sales. They miss quarterly earnings estimates by a cent or two and their stock drops a bit. And so on. And so on.

When things are at a tipping point, your actions have a much larger impact than you think they do at first glance. Not only do they greatly affect your life directly, but they ripple out throughout the world in many different ways and often have indirect effects on you.

That sums it up right there. Is life about what we wear, what car we drive, what house we live in, what restaurants we eat at, and what stuff we accumulate? No. It’s about experiences and pleasures. It’s about friendship and relationships and human interaction. It’s about finding those things we’re good at and applying them to the world.

Seven | Living in a Green World
What if the unthinkable happens? What if a nuclear bomb exchange occurs? What if we have another few oil disasters like the one in the Gulf, decimating world seafood populations and causing water shortages? What if there’s a disease epidemic killing millions (remember the swine flu? We were lucky, it could have been like a worse version of the Spanish Influenza of 1918 that killed my great-great-aunt.)?

If you’re engaged in a dependent lifestyle that’s focused entirely on material posssessions, the adjustments in your life will be brutal and you may have difficulty making it through such changes. If you’re already focused on a lifestyle of self-reliance and voluntary simplicity, the road to dramatic change won’t be that painful.

Is Voluntary Simplicity Worth Reading?
The natural response to a lot of the content of this book is that it’s all about environmentalism and the like. In fact, a few years ago, I encouraged a reader to pick this up and he wrote back to me a few weeks later ranting about how he was never going to tie himself to a tree like the “hippie” that wrote this book.

If that’s what you got out of the book, you’re missing the point. The entire point of the book is that you don’t have to overconsume in areas that aren’t important to your life. If you don’t watch television, don’t buy a television or have a cable box. If it’s nice outside, don’t run your air conditioner. If you’re not into clothing, wear clothing until it’s actually worn out – and then even consider mending it. In other words, if it’s not all that important to you, don’t consume.

For me, this was one of the most thought-provoking books I’ve read in the past five years or so. It made me think deeply about a lot of the assumptions I’ve had in my own life and made me question many of my personal choices. It actually helped me move forward in my personal finance progress because I started to question things at a deeper level than I had before. Why am I actually earning this money anyway? What impact does this choice have on others, and how does it echo back to me? Something as simple as buying a gallon of gas has an impact on many levels, an impact that bounces back in many different ways (not just environmentally, but economically and politically and socially). The same goes for buying a disposable diaper and tossing it in the trash when it’s used up.

If you’re struggling at all with these kinds of issues, Voluntary Simplicity is an absolute must-read.

Loading Disqus Comments ...
Latest from Trent
How to Use an Impact-Effort Matrix For Your Finances
The 7 Most Common Personal Finance Questions, Answered
Everything You Need to Know About Mortgage Brokers
Read more from Trent
Featured on: