Review: What Does Somebody Have to Do to Get a Job Around Here?

Each Sunday, The Simple Dollar reviews a personal productivity, personal development, or business/entrepreneurship book of interest. 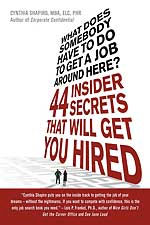 I was very lucky after college to fall straight into a job that I enjoyed quite a lot. My wife, on the other hand, wasn’t so lucky – she sent out mountains of applications and resumes, interviewed all over the place at all sorts of organizations, and eventually ended up working at a place that she would have never believed when she started the job search.

This loudly titled book by Cynthia Shapiro, subtitled 44 Insider Secrets That Will Get You Hired, offers up a big handful of very brash tips for getting hired. The brashness and tone often makes it seem like a pre-hiring complement to Penelope Trunk’s excellent Brazen Careerist. In other words, this is a really interesting book to read if you’re hunting for work (or you may be soon).

But is the advice solid? Let’s take a deep look and find out.

A Walk Through What Does Somebody Have to Do to Get a Job Around Here?

Cynthia Shapiro is very direct and blunt about what’s on her mind. I like blunt. Don’t pull any punches with me, and I’ll like it. No need to mince words. So, one quick way to tell if this book is for you is to ask yourself if you like that kind of attitude and frankness. Some do, some don’t.

1 : You Are Being Eliminated
Guess what? Your well-crafted perfectly matched resume has a strong likelihood of never being read. Either the person hiring already has a candidate in mind, they’re looking for some specific resume element that’s not listed in the description, or they’re simply overwhelmed with resumes (and people calling about their resumes) that they didn’t give yours even a moment of attention.

Another possibility, especially if you’re sending out a lot of resumes but not getting much attention at all, is that you’re making one of several general mistakes (outlined in the next part). These mistakes, once seen, can quickly take your resume straight to the “out” pile, and people often carry them from application to application, repeating the same mistake over and over and getting that same negative result over and over.

I look at it this way: don’t assume you have a God-given right to have the company you’re applying for study your resume in detail. They’re trying to fill a position for them, not please you. You want something from them – and to get that something, you have to play the game a bit.

2 : Stop Playing Resume Roulette
Your resume is an advertisement. You’re the product, and you’re trying to sell that product to the company that’s hiring. That means you need to think like an advertiser when crafting your resume. Highlight the most positive stuff, and make it stick out there very clearly. Eliminate the stuff that is negative or inconsequential. Get the key words in there, especially if you’re submitting electronically or to a tech-heavy company.

You should also be aware of what’s online about you. What do you get if you Google your name? Make sure it’s something that actually reflects well on you. In other words, get the drunken pictures off of your Myspace page.

3 : Your Interview Is Over
Most of this section is pretty standard interview advice – carry an aura of self-confidence, come equipped with good stories about your success, and so on.

Several of these tips are focused on etiquette – “should I call or shouldn’t I?” Most of these boil down to a general rule of thumb: don’t make a nuisance of yourself. Put yourself in the shoes of the person you’re calling – and be honest. If your behavior would annoy you, it would likely also annoy the person you’re calling, and thus hurt your job chances. A call can be useful – a lot of calls, especially at inappropriate times, are not as useful.

Several of the tips in here seem to suggest going a long way to present a false aspect of who you are. Any interviewer worth his salt will bust right through that pretty quickly. While it’s useful to accentuate the positives, you’re almost always better off being honest when interviewing, because if you’re caught in a falsehood or a misrepresentation in an interview, you’re automatically done.

4 : Danger! Traps Ahead!
This is a mish-mash of excellent suggestions related to the process of hunting for a new job. I felt that tactic #38 really summed up everything in this chapter – and in this book. Getting a job boils down to clarity, courage, craft, and consistency. Be clear about who you are and what you want. Have the courage to chase after it. Put in the extra effort to craft your resume and your experience to lead you there. Be consistent in what you want, what you’re saying, and what you do. Do all four and you’ll be fine.

The piece that stood out to me here was always negotiate. I think that’s true for almost any job beyond an entry-level position. If you just accept the initial offer, you don’t give a good impression – you give the impression of a pushover who won’t fight hard. Always negotiate. Come back with a better offer and see what can be worked out.

5 : You’re Hired. Now What?
This is almost like a miniaturized version of Brazen Careerist, in that it’s a brief coda containing just a handful of very basic tactics to use after you’re hired.

The big theme is to make allies first and realize that you don’t have to prove yourself. You’re much better off learning what’s actually going on in the organization and building relationships at first. You’ve already proven yourself by being hired – you have nothing to prove in your first week. Ask lots of questions and do what you can to start helping others and building a network of people that will help you, starting with your boss.

Some Thoughts on What Does Somebody Have to Do to Get a Job Around Here?

Large organizations are ridiculously cutthroat. I used to work in a very large organization and even in the most laid back organizations with extremely tight and well-defined career paths, there are still interpersonal politics all over the place. When you get into areas where “successful” people can be quickly promoted up the food chain, you’re basically asking for politics. I often wanted to say “This advice is garbage” while reading this book, but it’s not – office and hiring politics can make or break you.

The grass is rarely greener on the other side. Aside from that complaint, few jobs are as bad as the people in them like to make them out to be. Jobs can be sressful, sure, but when you’re in a particular career path, most jobs are going to have similar levels of stress. Don’t place all your hopes and dreams on getting a similar job at Initrode when you’re woefully unhappy at Initech.

Not getting a job is not the end of the world. Not getting the job isn’t a reason to be devastated and then polish off a bottle of Cointreau and a whole Sara Lee poundcake. Not getting a job merely means that one path out of several hundred available to you is now closed, and now you have the opportunity to search for other paths. I have never, in my entire life, looked back at a job not taken and wished I had it. Why? Looking back is time spent not looking ahead.

Is What Does Somebody Have to Do to Get a Job Around Here? Worth Reading?

If you’re in the middle of active job searching, What Does Somebody Have to Do to Get a Job Around Here? is well worth checking out from the library for an afternoon’s read. Most of the advice is spot-on, and Cynthia Shapiro gets right to the point, making it a very good read for a busy person who’s in the middle of a job transition.