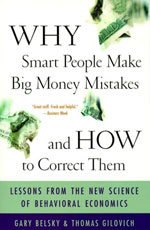 This book takes an interesting tack as compared to other personal finance books. Rather than focusing directly on mechanical personal finance issues, it instead focuses directly on behavioral issues, particularly the traps that people who are good at analysis and memorization (i.e., “smart” people) tend to fall into.

I often find myself in this category. I can read quickly and assemble pieces of information into a larger picture pretty easily, but because of that there are some tasks that I’m not good at. This book argues that many personal finance tasks focus on skills that traditionally “smart” people have a hard time with and provides some solutions to get yourself in the mindset for personal finance success.

Let’s dig in and take a look.

Chapter 1: Not All Dollars Are Created Equal
The book opens with one of the biggest psychological traps that people fall into – the idea that dollars aren’t created equal and that there are times where they treat a dollar with more value than at other times. Here’s an example: let’s say you were about to buy an item at Store A that cost $100, but you found out that the same exact item is being sold at Store B for $50. Would you switch stores? Now, let’s change it a bit – let’s say the item at Store A cost $3,050, while the same exact item was on sale at Store B for $3,000 – would you go to the other store then? Most people would do it the first time, but not bother the second time. Why? They look at percentage, not at the actual dollar amount, meaning that the dollars themselves actually have less value to them.

The authors refer to this as “mental accounting,” and it explains why people often keep gambling when they’re ahead (the money isn’t real) and why people are much more likely to blow $50 found in a parking lot than blow $50 they worked hard to earn. Or, for example, people maintain a revolving balance on their credit card while keeping cash in the bank – the cash in the bank is more “important” than the cash going down the credit card rat hole.

How can one get around this? If you have any newfound cash, wait – don’t spend it for three months or so. Another tip: imagine that all income is earned income, so you don’t fall prey to the temptation of blowing a windfall on stuff you don’t need.

Chapter 2: When Six Of One Isn’t A Half Dozen Of The Other
The second trap discussed is the idea that people will tend to be more risky to avoid potential loss, but will be more conservative to lock in profits. Let’s say I gave you $1,000 and offered you either $500 more or the opportunity to flip a coin – if you win, you get $1,000 more but if you lose, you get nothing. Most people would choose the automatic $500. Now, let’s say I gave you $2,000 and said you either had to give me $500 of it back or we flip a coin – if you win, you keep all $2,000 but if you lose, you give me $1,000 of the money. In this case, most people would choose the coin flip. But the scenarios are actually identical. It’s actually this same central idea that convinces people to sell winning investments more readily than losing ones and also to make spending decisions based on how much money they’ve already spent.

You can fight this by understanding your own risk tolerance (“if the stock market dropped 25% tomorrow, would I be tempted to pull my money out?”) and also simply paying less attention to your investments once the money is in place (so you’re not worrying about the short term ups and downs).

Chapter 3: The Devil That You Know
In a nutshell, the more choices that people face in life, the more likely they are to simply do nothing. However, if people believe for whatever reason that one choice is strictly better, they’ll always go for that choice. This, in a nutshell, is why stockbrokers exist – their job is just to convince people that one choice (out of the huge array of investment choices available) is strictly the best one.

This manifests itself again when people have opportunities to change their investment portfolio. Many people just look at their investments and choose to do nothing rather than rocking the boat even if there is a clearly superior strategy available to them. Why? It’s the same idea – there are many options and it’s much easier to do nothing. The only way you can consistently get people to change their pattern is to make the benefits of the new choice very strongly outweigh the old.

How does one get around this? Realize that not making a decision is a decision itself, and that every time you sit back and choose to do nothing, you may be missing out on an opportunity. Basically, don’t be afraid of change if there are benefits to this change.

Chapter 4: Number Numbness
This chapter opens by discussing inflation and the fact that people often completely ignore it in calculations. This is why it’s often useful to calculate potential returns with interest as a factor – subtracting, say, 4% from the gains of any investment and using that as the basis for investing (is a 5% rock-solid investment better than a 9% shaky one? How about a 1% solid investment versus a 5% shaky one?).

In a nutshell, don’t be impressed with short term success and also you should play the averages. This is basically just a fancy way of saying “put your money in a very broad index fund.”

Chapter 5: Anchors Aweigh
You never get a second chance to make a first impression. It turns out to be a very true statement, and a very tough mental block for some to wrap their minds around. This actually explains the logic behind a lot of advertising for financial (and other) products.

For example, let’s say you see an ad for a mutual fund that says it returned 18% versus an ad for another fund with a 12%. Both ads have their percentage in big, bold letters so your first impression is that number. Now, which one are you likely to go for? What if you read the fine print and found that the 18% was just over the last year and the 12% was over the last decade? It might change the minds of a few of you, but most would still lean towards the 18%.

A similar phenomenon occurs in housing, where people first hear a number and it gets stuck in their head as the “real” value of a house. This can end up biting you very hard if a local housing market takes off or if it collapses; if you’re still stuck with that original number, you could end up with some big losses.

The best solution is to always find out more information by asking more people and reading more data and also be willing to toss out your first impressions and biases if things show you that they’re wrong. For example, if you are insistent that your house is retaining value in a rapidly cooling housing market, you may want to rethink that assumption.

Chapter 6: The Ego Trap
Here, it’s all about ego and the tendency for smart people to believe that they know more than they actually do, leading them to make faulty decisions. An example of this is homes for sale by owner, in which people are hoping to cut out the middleman that would cost them 6% on their home’s sale price. As a homeowner, they believe they know all they need to know about the home and the home buying and selling process and thus dive in head first. However, statistics show that FSBO homes often sell only 1 or 2% above what they would have received through a broker, there are a bunch of additional costs for advertising, and the time investment is much greater.

Investors often do this very thing by coming up with grand explanations for losses, but at the same time use the big gains for justification for their strategy. For example, if an investor has three stocks where one gains 50% and the other two lose 50%, that’s not a good year, but some investors try to excuse the two losses as a fluke, never believing that the gain might actually be the fluke.

The best way of combating this is to simply add more risk to any potential financial move. If your house isn’t selling, consider that it might be overpriced. If you’re looking at an investment, put more weight in the worst case scenario than in the best case.

Chapter 7: I Herd It Through The Grapevine
The final chapter focuses on the herd mentality, the idea that people tend to sell when others are selling and buy when others are buying. Who makes money from this? The stock brokers do, not the investor.

The chapter offers example after example after example of why following what others are doing while investing is a really poor idea. The one that really made me think was the idea of the “small herd.” For example, let’s say on the market that someone wants to sell a share of a particular company that last sold at 100, but no one wants to buy. That person really wants the cash, so the person finally finds a buyer at 90. Then, on the ol’ stock ticker, it’s shown that the company’s stock price has dropped from 100 to 90 today. Panic!

If you believe in your investment, stick with it no matter what it’s doing over the short term. If you don’t believe in the investment, don’t invest in it to begin with.

I found Why Smart People Make Big Money Mistakes to be an insightful and quite enjoyable read. It can be quite an eye-opener and will likely cause you to think very carefully about the moves you make, from buying a home to paying off credit card debt to investing. If you try hard to think of your own behavior in the examples from the book, it can be even more of an eye-opener.

Still, it’s not particularly strong as a reference book and not one that I’ll come back to and read over and over again. In other words, you should definitely read Why Smart People Make Big Money Mistakes, but try checking it out from the library first. You might also want to read some excerpts from it to get a flavor for it.

Why Smart People Make Big Money Mistakes is the forty-third of fifty-two books in The Simple Dollar’s series 52 Personal Finance Books in 52 Weeks.