Review: You Majored in What? 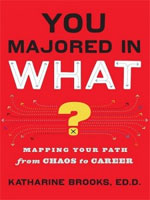 I double-majored in life science and computer science. What on earth am I doing writing a blog about personal finance? Shouldn’t I be in a room somewhere writing data analysis programs?

The truth is that many people don’t follow a straight line from high school to their career path. Today, that path often goes through college, but quite often, it doesn’t involve studying the field that a person ends up practicing in their career. I dabbled in several different career paths during and immediately after college before more or less stumbling onto the path that I’m currently on.

In other words, don’t believe that your college major defines what you have to be doing for the rest of your life.

Of course, having a degree in a field outside of where you want to go with your career can be a challenge, and that’s the focus of You Majored in What? by Katharine Brooks. The book focuses on the person who finds themselves out of college and interested in entering a career path that doesn’t match their degree. What now?

1: A Butterfly Flaps Its Wings and You Find a Job
Brooks opens the book by simply stating that most people who depart high school, go to college, and choose a major do not follow a straight path from that point to a job in their field of study. Many different kinds of unexpected events can occur along the way, from an internal change within you to countless types of unexpected opportunities handed to you by others. In my own path, for example, I didn’t ever really expect that I would find my side hobby of writing turning into anything that could earn me significant money.

2: Connecting the Dots
Most of us spend our time spread across a lot of activities, many of which seemingly have little connection to each other. We don’t spend all of our time focused on one single area. We’re engaged in our professional area or our studies, but we’re also involved in community projects, various social groups, hobbies, and countless other things. Quite often, though, these things that we spend our time on have some deep underlying patterns that actually do connect them together. The career we should end up with should be one that taps deeply into those underlying patterns.

3: Mental Wanderings
Another element of finding the right career path, regardless of our area of study, comes down to how we think and what we think about. When our thoughts are idle, where does our mind wander to and how does it evaluate those things? People who do free-form associations, for example, excel in different areas than those who think in an orderly and linear fashion. People whose mind wanders to social concerns, for example, should be focused on different areas than those whose minds wander to music or wander to solving problems.

4: Wandering Beyond Majors and Minors
Transferable skills are key, in other words. Often, what you learn in college isn’t so much the material of your major, but how to study effectively and learn quickly, how to present, how to work in teams, how to work with others, how to be a leader, how to communicate ideas in a written format, how to manage your time, and so on. These skills are vital parts of many different career paths, and people who have them have a leg up no matter where they end up.

5: Why Settle for One Career When You Can Have Ten?
You don’t have to spend your life simply following one career path. I’m 32 and I’m on at least my third career path at this point, for one. The things that many people use as an excuse to stand in the way of switching career paths, though, is age, money, and education. These are traps that people create for themselves, and money often underlines all three of them. Being conservative with your money gives you the freedom to change careers and start anew if you wish. If you start piling up the debts and the commitments, such shifts become much harder.

6: Even Wanderers Make Plans
Career-hopping doesn’t mean that long-term goals are pointless. If anything, such a situation makes goal-setting on the three-to-five year horizon that much stronger, particularly if you want to successfully career-hop. Goals for financial success and self-improvement are particularly strong because they enable you to make a greater variety of personal choices when you achieve them, as you’ll have the money to support you and the skills to move forward.

7: Paging Dr. Frankenstein
Quite often, such wanderings can wind up being very lucrative because of the skills that are combined together. For example, a person who spent some time in China teaching English, followed by some years as a computer programmer, might find themselves being a very valuable technology vice president at an international corporation because of those combined skills. A programmer might transition into being a writer, then find that they’re very skilled at producing internet content because of the meshing of skills.

8: My Job as a Krackel Bar
A key part of career hopping is understanding how to write a very effective resume that highlights the skills you have that relate to the job you’re seeking. The advantage of career hopping is that you’ll often have a medley of skills and highlights to choose from (while a disadvantage is sometimes a lack of depth), so you should seek to make it clear that you offer a unique set of traits that stands out from the crowd.

9: Channeling Jane Austen
Brooks also argues that an effective cover letter is key to this process, which means that you’ll need to sharpen your writing skills to highlight your unique skill set. I think it goes even further than this, as a person with a unique skill set will often find many opportunities to write.

10: Wandering Into the Workplace
Often, a person with a “career wanderer” background will have an advantage if they reach an interview situation, as they’ll have a wide variety of experiences and stories to tell during the interview process. Before interviewing, focus on identifying stories to tell that will show off your diversity of skills and how they set you apart as a candidate for this particular job.

Is You Majored in What? Worth Reading?
As with many personal finance books, this book hits a home run with the specific target audience: if you’re a person who is struggling with the “right” major in college or is near the end of college and uncertain if they’ve made the right choice or is thinking of switching careers in the professional world (especially early on), this is a great book to read. It outlines many of the specific things that a person needs to do and to think about if they’re going to be a career-hopper, and I found the advice to be very solid (based on my own experiences).

Now, if you’re already very sure about your career path, this book won’t be of any real help to you. It’s very much focused on the career-hopper, particularly those who jump to career paths unrelated to their current career.

If you are a career-hopper or at least unsure of your path, though, pick this one up.

Check out additional reviews and notes of You Majored in What? on Amazon.com.