Every Sunday, The Simple Dollar reviews a personal finance book or other book of related interest. 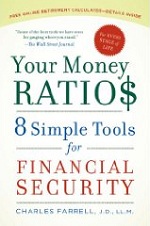 One thing I often do when looking for books to read and review for The Simple Dollar is simply go to the “new releases” section of my local library and browse the personal finance new releases. That is exactly how I stumbled upon Your Money Ratios by Charles Farrell.

My usual method of deciding whether to review a book is to simply study the dust jacket for a moment, seeing if there’s anything there that gives me an indication I should stay away (like talk about “financial apocalypse” or something else wholly fear based). I usually then open the book to several random places and see if I find anything interesting, and if I’m still unsure, I’ll take the book to a chair and read the first chapter or so.

I popped this book open to the start of the first chapter and was immediately intrigued. Let’s see what exactly Farrell has to say in this book.

1 | The Capital to Income Ratio
Farrell opens the book by arguing that, by the time you retire, you need to accumulate 12 times your annual salary, which will put you in the position to live on about 80% of your annual income. The “12 times” number comes about from an assumption that your money will return, on average, 8% a year. Thus, if you feel like that return is too optimistic, you should have a higher “times” number.

4 | Where to Save Your Money
As you sock away money to meet that “twelve times” goal from the first chapter, your priority should first be to your 401(k), then to your IRA, then to other investing options. I think that’s reasonable, though I think there are some fair arguments one could have about a Roth IRA versus a 401(k). You need this savings to be automatic, so set up automatic deductions from your paycheck or automatic transfers out of your checking account to cover this savings.

5 | The Debt Ratios
This chapter looks at the simple question of whether debt can help you to move from being a laborer to a capitalist. In a narrow sense, yes, it can, as debt can reduce the monthly cost of your housing and other needs in the short term. However, if you don’t pay off that debt at a reasonable rate – or if you acquire high-interest consumer debt – your debt will hold you down. His big point is that borrowing for a mortgage is pretty much the only significant debt an adult should acquire and that it should at most be two times one’s household income.

6 | The Investment Ratio
If you’re under sixty, Farrell recommends having half of your investment in stocks and the other half in bonds. If you’re over sixty, it should move more towards bonds. This is a pretty conservative investment stance, one that would be a bit of a stretch to get the 7% return that Farrell claims you will need in the first chapter. I think it’s reasonable, though, to park your money in a target retirement fund, as these will provide the same “more conservative as you age” effect, but add more risk and reward when you’re younger.

7 | Stocks and Bonds 101
Two things are needed here: rebalancing and diversification. Your stock investments should be spread across lots of different companies, including international ones, big ones, and small ones. Your bond investments should largely be in government bonds, but should be diversified there as well. For rebalancing, each year you should move money between the stocks and bonds to restore the overall 50-50 balance described earlier.

8 | Ignoring Wall Street
Don’t spend your time worrying about what Wall Street is saying. They’re often worried about the short term – the next few years – while you’re not really that concerned about it at all. You’re worried about the long term, something rarely discussed on CNBC. Don’t let it worry you.

9 | The Disability Insurance Ratio
Farrell recommends getting coverage equal to 60% of your income, which will roughly amount to your current income after taxes. This payoff will largely replace your current take-home, which means your current standard of living won’t be significantly altered by a disability.

This, of course, means that as you save more, you should need less life insurance. Thus, a twenty or thirty year term policy might not have to be renewed at all once the term ends.

11 | The Long-Term Care Insurance Ratio
You should start looking into long-term care insurance in your mid-fifties, not before. Before that, the risk is so low as to not be worth the cost. After that, your risk goes up enough that the cost might be prohibitive. This chapter is easily the most complicated in the book, but it also has a fairly small target audience (people in their fifties).

13 | Getting Professional Help
If all of this is too complicated, Farrell advises seeking a professional financial advisor. The factors you should look for are competence and training, ethics, and independence. Beyond that, I recommend seeking a fee-based advisor who doesn’t have a financial stake in pushing you towards certain investments. Farrell offers a few warning signs of a bad advisor, particularly one who promises over-the-top returns or anything like that.

Is Your Money Ratios Worth Reading?
Your Money Ratios succeeds in setting up a handful of numerical “rules” for people to simply follow – and if they follow them, they will find themselves in a reasonably good financial spot. In places, the book does a good job of explaining the “why” behind the ratio and the numbers are largely based on good principles (though I think the predictions about future returns are a bit strong).

If you like numbers but are pretty uncertain as to exactly how to calculate what you’ll need for retirement and for other purposes, Your Money Ratios is an excellent book for you to read.