Review: You’re Broke Because You Want To Be 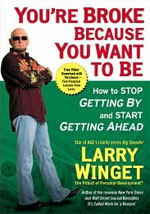 Blunt. That one word sums up this entire book – in fact, it sums up pretty much everything I’ve ever read by Larry Winget. He cuts right to the chase with his message and doesn’t pull any punches to be “nice.” Some people view that as bullying – others view it as helpful.

From just that little blurb, you probably have enough information to make up your mind about whether You’re Broke Because You Want To Be would be a worthwhile read for you. Some people respond really well to cutting to the chase and not pulling any punches – others are driven away by it. Make no mistake, this book falls firmly into the take-no-prisoners camp.

Personally, that approach doesn’t bother me in the least. I know very well that there are some things in life that are best served by a very direct and forceful personality. For example, athletics – a coach that doesn’t demand a lot and push his players will wind up with a weak team. Does personal finance advice merit this same kind of approach? Let’s dig in and see what Larry has to say.

A Walk Through You’re Broke Because You Want To Be

Introduction
Normally, I skip right over the introductions and head directly to the meat of the book, but in the introduction Larry tackles an issue that has been bothering me as of late: the distinction between poor and broke. Larry really nails it here, so I just want to quote a small piece of the introduction here for posterity.

Please don’t say, “But what about the poor people, Larry? They don’t want to be broke.”

Great point. You’re right. I’m not talking about being poor.

Poor is a condition I find very sad. Sad, yet inevitable. Jesus said, “The poor will be with you always.” And they will. There are people who live in soicieties and countries where there are no opportunities for advancement and it takes all their effort just to survieve. They are not going to have enough to eat well or live well or take care of themselves.

So let’s get this straight from the outset so you can get off your high horse and understand what I am really saying. I didn’t write this book for the poor people of the world. I know it is going to take a lot more than a book to help truly poor people. To think otherwise would be insulting.

I am talking about broke. Broke is not a condition like being poor. Broke is a situation you find yourself in because you are either underearning or overspending.

Larry pretty much hits the nail on the head here. Almost every popular personal finance blog will see a comment or two where a reader will go off on poverty issues. Poverty is not something that I have the capability of addressing – that takes grand societal change. What I can address, however, is the issue of broke, because that’s something an individual can grab ahold of and change.

Chapter One: Money Matters
Since the premise of the book itself is that you make the active choices that cause you to be broke, the first chapter deals with the excuses that people use to deny that idea. There are a lot of them, and I’ve been guilty of most of them at various points in my life.

My favorite one is the “parent” excuse: “it takes all I’ve got just to come home, fix dinner for the family, entertain the kids for a while, put them in bed, take a bath, and fall asleep myself.” I have an infant and a toddler at home, so I know that there is some merit to this argument – but it’s also flawed. First, it’s not a good reason for choosing not to curb your spending. Second, you can find time to improve yourself or find success in other areas – I started The Simple Dollar with an infant at home and kept it running while he grew into a toddler and a second infant arrived on the scene.

Winget’s philosophy is that we choose our destiny via the small choices we make all the time, and we deserve the outcome of those little choices. If you’re constantly choosing to spend more than you should be spending, then you’re broke because you want to be. Until you make up your mind that you truly want something different, you’ll remain broke by your own choice.

Think about the things that you really value. Make a list of three or so of them – the things that you value most in life. Then compare that list to how you actually spend your money. Are they in alignment? If they’re not, that’s a sure sign of financial trouble.

Chapter Three: Know Where You Are
The first step, of course, is to figure out where you actually are. Spend a month tallying up every dime that you spend – every bill, every splurge, everything. Then compare that to what you’re actually bringing in. The first number needs to be smaller than the second one, period – if it’s not, you’re headed for complete disaster.

The next step is to formulate a plan: figure out what you actually want, then figure out how to get from where you’re at to where you’re going. Larry suggests writing this all down and making it something concrete and tangible – and I totally agree with that idea. It gives you something to hold in your hand, and it gives you something to hang on the refrigerator and see time after time as you move forward.

Chapter Four: How to Get Out of Debt
This chapter consists of a large pile of specific tips for debt reduction and removal. Most of these are fairly mundane – call your creditors, pay ahead on your highest interest debt, cut up your credit cards, stop spending – but two jumped out at me.

Make a spending journal. Basically, every time you spend money on anything, write it down. This is really a psychological trick more than anything, but it forces you to realize how you’re draining your wallet drop by drop.

Make micropayments. This one works well with online bill pay. Basically, whenever you see that you’re a bit ahead with your money, spend it immediately… by making an extra payment on your most painful debt. If you have an extra $20, don’t spend it on something frivolous – instead, immediately make that extra payment so you aren’t tempted to spend it.

Chapter Five: How to Cut Your Expenses and Increase Your Income
Much like the previous chapter, this one is full of a bunch of short ideas on … cutting expenses and increasing income.

As for earning more, it’s mostly about busting your butt. You’ve got two choices: either start improving yourself in a very serious fashion to earn more money at your current job, or start work on a second job (or developing your own business). Those are really the only two roads available to most people for increasing their earnings.

The key, though, is that when you reduce your expenses or you increase your income, you don’t then expand your spending to fill that difference. Instead, roll that extra cash into debt repayment, an emergency fund, or if you already have those, into investments and savings for your big dreams.

Chapter Six: The Stuff Most People Overlook
This is a third chapter of quick, short pieces on basic money matters and, again, much of this comes across as familiar. These are more detail-oriented things, such as using a shopping list and getting a good checking account.

One area stood out to me, though, and it’s something that I rarely see tackled in personal finance books. Larry suggests taking up reading books. He offers up a few examples of things to read (a mixed bag of stuff), but the simple fact that he broaches the topic of reading as a way of getting ahead financially is admirable. This is something I’m a big believer in – I’m a regular at my local public library, as it’s a giant building full of free books and most of them have knowledge inside their covers that will either enlighten me or motivate me to make some changes.

Please, read a book and think deeply about what you’re reading. The more you do that, the better off you’ll be, both personally and financially.

Chapter Seven: Now It’s Time for Your New Budget!
The book starts winding down rapidly at this point, as this chapter basically says to recalculate what you’re spending and what you’re earning after making these changes. What you’ll find is that the difference between what you earn and what you spend will be in a much healthier place if you’re genuine about making some real change in your life.

You’re Broke Because You Want To Be is a personal finance motivation book, straight out of the Dave Ramsey mold. Winget comes off with almost a drill sergeant persona – he’s blunt, to the point, and doesn’t pull any punches with anything.

If you know someone who uses a lot of excuses to avoid taking control of their financial life, this is probably a worthwhile read for that person. That person might be you or someone else you know, but in either case, this is the exact person that You’re Broke Because You Want To Be is written for. The personal finance advice inside isn’t complex or anything exceptional and new, but it is presented with a very strong coach-like tone, and for a person who can be driven by a good motivator or coach, this could be the right book.

Be aware, though, that some people can easily see this sort of tone and attitude as being bully-ish. I don’t see it that way, but I am aware that there can be some severe backlash against Winget’s perspective. If you think you might be in that category, pick up the book on the shelf at your local bookstore and read several pages before jumping in.

I enjoyed You’re Broke Because You Want To Be quite a bit. That’s largely because I enjoy straightforward talk, and that’s just what Winget serves up here.