Review: You’ve Got to Be Believed to Be Heard 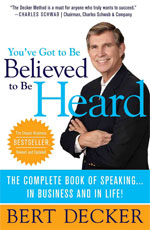 Over the next several months, I’m giving several presentations and speeches on my story and what I learned about personal finance along the way. Some of these engagements will be paid ones, thus this may be the beginning of a new revenue stream in my life.

As with anything new in my life, I’m filling some of my spare hours learning more about public speaking, particularly since this may begin to become a source of income. My first step was to simply ask some of my friends for suggestions, focusing on the small handful that I know have at least some positive public speaking experience.

I received two book suggestions in return – this book and the already-reviewed Presentation Zen.

You’ve Got to Be Believed to Be Heard by Bert Decker is a thorough guide to public speaking, focusing somewhat on extemporaneous speaking (when you don’t have time to prepare much in advance, like off-the-cuff speeches and question-and-answer questions). It addresses most of the major issues that people have with public speaking: overcoming stage fright, organizing your ideas, making your energy and passion come across in your voice, mastering your mannerisms, using eye contact, using humor, and so on, including plenty of exercises to improve these specific aspects of your speaking.

Is this material actually compelling and useful to prospective public speakers? Or could you just get the same thing from a Toastmasters meeting or two? Let’s dig in.

The Emotional Connection
First of all, we are all public speakers. Every time we speak to someone else, we’re practicing public speaking on some level. Some people are good at this – they come across as interesting and energetic and you want to get to know them more. Some people aren’t.

Decker’s key argument throughout the book is that successful speakers make an emotional connection with their audience. A great example of this comes from comparing Bill Walsh to John Madden. Both were very successful football coaches who tried their hand at broadcasting and speaking. Obviously, Walsh failed and Madden succeeded, but why? Although Walsh was more accomplished and more photogenic, he wasn’t able to connect with audiences that well – he rarely smiled and rarely put any enthusiasm or life into what he was saying, things that Madden was able to succeed with. You don’t need to be photogenic to succeed – look at Madden or Dick Vitale! They succeed because they’re clearly passionate and make an emotional connection with the people in the room. More Dick Vitale and less Dan Rather, in other words. More Steve Jobs and less Mark McGwire. More talking and less reading prepared statements.

It’s pretty obvious from watching good speakers and bad speakers that there’s a pretty wide gulf there, but why? Decker argues that the difference is that people buy into ideas based on emotion, then seek facts to back them up. I see it in myself all the time. Thus, people who bring positive emotion to the table when speaking are the ones that succeed – things like happiness, excitement, energy, temptation, and so forth. The ones who bring negative emotion fail – nervousness, contempt, and so on.

The spoken word is almost the polar opposite of the written word. Your text is only one small slice of what you communicate when speaking. You also include posture, facial expression, energy level, eye communication, vocal inflection, vocal intonation, volume, gestures, and so on. Your actual words are only one piece of the puzzle.

In the spoken medium, what you say must be believed to have impact. In order for it to be believed, you must be believable – and the easiest way to do that is to believe in what you’re saying with all your heart.

Believability is overwhelmingly determined at a preconscious level. People choose to believe you or not based on a very quick analysis that’s often not based at all on what you’re saying. This is even true in writing (believe me, I’ve had people question everything I say, even when the question is irrational, while others blindly accept everything I say), but it’s very true in speaking with all of those other cues.

Using All of Your Mind
When you first approach a person, they immediately make a snap decision about you: are you a friend or are you a foe? Quite often, this impulse isn’t based on the information you’re hoping to communicate. Instead, it’s a pure first impression – how do you come off at first glance?

The process of that first impression is embedded deep in people. Their sense of who to trust and who not to trust is often set in early childhood and it’s based on very early experiences. People tend to gravitate towards those that show warmth – they smile, they’re willing to embrace, they have humor, and they share.

Decker’s general suggestion is to be natural, energetic, and enthusiastic from the moment you walk into the room. Move towards people, grip their hand with enthusiasm, and engage positively directly with them. Many successful speakers “work the room” a bit before they begin by doing just this – shaking hands and chatting with people for a while before their presentation is even set to begin. This puts at least some of the audience on your side – they identify you as “friend.”

Two Key Principles
Decker is sneaky here – there are actually six key principles that he divides into two groups. Decker offers a TON of great tips here – I’m just picking out some that I’ve tried out myself.

Eye Communication Look people in the eye, but don’t stare – do it for a five count. Similarly, try to avoid very short eye contacts (eye darting) or blinking for more than an instant. You can practice by putting Post-It notes of smiley faces up on a wall, then practice speaking to those faces, moving your eyes from face to face with five counts and not blinking heavily, until it becomes natural. When you’re actually speaking, you become less nervous, because your speech transforms into a collection of one-on-one conversations.

Posture and Movement Work on keeping your stomach pulled in, your back straight, and keep your weight slightly toward your audience. Also, move around while talking, but don’t pace – move from one spot to another, stop, then move again.

Dress and Appearance Dress appropriately – conservative is usually better unless you know your audience. If you’re wearing a jacket, you should usually button it (unless it’s a woman’s suit that’s tailored to be open). Ask others for honest feedback, too.

Gestures and the Smile We all have nervous gestures. See if you can find yours – then focus on stopping them (if you can’t figure yours out, ask someone to tell you after watching you speak). Don’t be afraid to exaggerate gestures you’re using for emphasis, like hand sweeps. Also, don’t be afraid to smile – smile as often as you feel is appropriate. Don’t remain stern-faced – it doesn’t help at all.

Voice and Vocal Variety A lower voice is usually better, so work on lowering your voice for speaking occasions. My favorite? Try the King Kong exercise – say “King Kong, Ding Dong, Bing Bong” several times in your natural voice, except lower the final “bong” as much as you can. It actually does work at lowering your voice – I’m working on lowering mine a bit not only for speeches, but for my podcasts.

Words and Nonwords (the Pause) Build your vocabulary by reading challenging things (but learn how to pronounce those words), then use those words in conversation until they’re natural. At the same time, avoid jargon like the plague – technical terms are only appropriate for a highly technical audience. Also, record yourself speaking and work on cutting out all pauses, so that you can choose where to put pauses for emphasis.

The biggest (and best) tip: record yourself as you practice speaking, then watch the recording. It’s very easy for people to identify their own speaking flaws.

The best way to go from avoiding it to actually doing it is to take baby steps. When you’re in conversation with others, you tell stories, right? Start by simply telling one of those stories to more than one person. Then do it when you’re standing. Then do it to people you don’t know as well. At that point, you’re already doing it – that’s public speaking. The more you do it, the less scary it seems.

What about stage fright? Decker strongly suggests visualization (as it says in Proverbs 27:19, “As a man thinks in his heart, so he is.”). Spend time imagining yourself giving the speech you wish you had the courage to give. Imagine it over and over, with as much detail as you can muster. The more you imagine it, the more comfortable your mind becomes with the idea.

From Information to Influence
Many people view a presentation or speech as an opportunity to relate data. Doing that, though, is a recipe for failure. What you want to actually communicate is an experience – data simply backs up your story and shouldn’t be the focus.

Center any speech or presentation you give around a story. Don’t drown that story in data – instead, just show slices that back up your points (if further data is needed, you can distribute it in another form).

Decker provides a pretty detailed system for creating such a speech or presentation, but I found one idea that stood out above the rest for me: keywords. A speech or presentation should be based on a handful of words, short phrases, or images that you can simply wax at length on – a minute to five minutes. This matches greatly with the Presentation Zen philosophy – your slides can merely be these keywords.

Another key part of a successful speech is attention getting and memory hooking. What can you do to make sure your message stays in their mind? Decker recommends loading your speech up with stories, examples, humor (without overdoing it), analogies, quotations, references to culture, pictures, and visual aids. The more you add of these elements (within reason), the more likely you are to hook into their memories with your message.

If you’re involved with public speaking – or would like to be – You’ve Got to Be Believed to Be Heard is a very worthwhile read.

A big, big tip: read this book near a computer. Whenever Decker mentions a speaker or a speaking event, look that event up on YouTube and watch it yourself. Doing this made the book really come alive for me and took it from being an interesting book to being an essential book on public speaking.