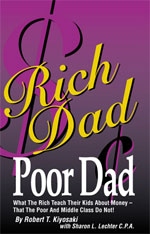 As I write this review, I’m reading this book for the third time. I thought it might be insightful to immediately mention the first two times I read the book and my reactions following the reading.

The first time I read the book, I felt inspired. I wanted to run out and start following some of the ideas in the book, but what I found is that you can’t just merely run down to the “courthouse steps,” spend five hours, and come away with $60,000 in cash, I became really disillusioned. I eventually ran into John T. Reed’s lengthy negative analysis of RDPD and was almost shocked at the level of criticism of the book, and with that criticism, I read the book a second time and concluded that the book was a waste of time. It was shortly after this second reading that I was requested by a reader to write up my thoughts on the author, who has written a large number of similar books.

So what kind of book would cause such a strong shift in opinion? Rich Dad, Poor Dad is basically what I would call a personal finance perspective told in the form of a parable, much like a book I reviewed earlier, The Wealthy Barber. But while The Wealthy Barber basically related the basics of personal money management in the parable along with examples that you could directly research and work out yourself, Rich Dad, Poor Dad is about a complete rethinking of how money works. For example, rather than seeing an asset as something with value, this book defines an asset as being something that generates cash flow. This means that according to this book, your home is not an asset.

Over the next three days, I’m going to walk through this book as I read it for a third time, hopefully without the cynicism inherent in my last reading of the book. I’m also going to limit my observations to what is within the covers of the book (meaning I’m going to leave out any external perspectives on the author) and accepting the parable of the rich dad for what it is, a parable. My only interest is the following question: what useful personal finance information is contained within these covers?

Loading Disqus Comments ...
Latest from Trent
How to Find Your Financial Comfort Zone
Try This Systems-Based Approach to Personal Finance
Should You Save For Retirement Before Paying Off Debts?
Read more from Trent
Featured on: