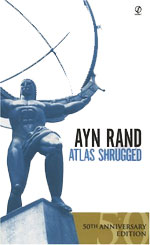 I spent my high school years reading approximately two books a day, many of them quite lengthy. I eschewed having a lot of friends then because, well, I simply had no interest at all in most of the high school social games. I generally kept completely to myself, but made a point to be friendly and social enough to enough people so that I was generally left alone to follow my own path.

Then I read Atlas Shrugged and, with that one book, I began to assemble an overall understanding of the world around me.

The book tells the tale of an America slowly rotting away due to technological regression and a lack of leadership. The leaders of society and industry are slowly disappearing, and the remaining ones seem to be fighting a losing battle against a slow malaise.

The central story focuses on Dagny Taggart, a hard-working railroad executive who fights diligently to protect her railroad from the growing malaise. Yet her actions seem to be one step forward, two steps back, and society itself is becoming an irritant to her. The phrase “Who is John Galt?” in particular aggravates her, as it is a social meme that basically means “Don’t ask questions because there are no answers.”

Eventually, Dagny discovers that John Galt is not a meme, but an actual person, one who has convinced the most productive members of society to go on strike, leaving the rest of the world to fall apart.

For a different perspective, the Wikipedia entry for Atlas Shrugged is detailed and well written.

How did Atlas Shrugged affect the person I became?

I started to question the fundamental structure of society, government, and economics. Prior to reading the book, I generally accepted that society in the United States was the way things should be; after the book, I began to dive into economic, social, and political theory an an effort to understand why things were the way they were. I jumped wildly from theory to theory, shifting my worldview wildly from week to week before finally beginning to build a structure that made sense to me, but it was Atlas Shrugged that made me begin to question how things worked.

I began to appreciate the power of the individual. One of the primary themes of this book is that intelligent, hard-working people are the ones that make the world work, and these people deserve the rewards of their intellect and effort. Even today, the people that impress me most are the ones whose actions have a genuine positive effect on the lives of people.

I began to be disillusioned by celebrity. Why should I respect anyone who represents values that I don’t agree with? Why should I look up to people who don’t contribute to a greater society? To me, Norman Borlaug is a hero, not William Hung, and I consider it an indictment of society when more people are familiar with Hung than Borlaug.

I realized that it was up to me and me alone to make a success out of my life. This is perhaps the biggest lesson that this book taught me. Before I read this book, I had this belief that just because I was intelligent, the world owed me something. After reading this, I began to wonder what value I really had to offer to the world. I might be intelligent, but if I spent all my time in the corner ranting about how the world owed me something, I would be wasting my life. I needed to use my intelligence for my own benefit, to get off my lazy behind and do something with it, or else it would just fester and rot.