Ten Books That Changed My Life #8: How to Win Friends and Influence People 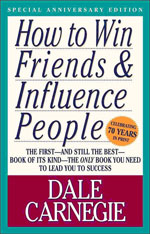 Even though I spent most of my life filled with anxiety in social situations, I took a position in mid-2002 that was, at least in part, a sales position. One large portion of my position was to sell people on a project and convince people to provide funding for future growth of this project.

Needless to say, I was scared by this daunting task. I had a very difficult time making friends with people easily, and as the time for salesmanship began to creep closer and closer, I began to withdraw more and more into a shell. I spent my time holed up, focusing on tasks I could do alone without interacting with others.

Somehow, anonymously, this book arrived on my desk one morning with a typed note taped to the cover that just said “Read me.” This was about a month before my first major sales pitch. I did what the note said and spent each day practicing one of the points in the book on everyone around me.

I knocked the presentation out of the park. Since then, I’ve given seminars to crowds of hundreds, met and interacted with more people than I could ever count, and discovered that I actually had the ability within me to talk to and relate to others, something I would have never believed before cracking the cover of this book.

Basically, the entire book is about how to deal with social situations, nothing more, nothing less. The outline of the book largely reveals the meat of the content within:

1. Don’t criticize, condemn or complain.
2. Give honest and sincere appreciation.
3. Arouse in the other person an eager want.

1. Become genuinely interested in other people.
2. Smile.
3. Remember that a person’s name is to that person the sweetest and most important sound in any language.
4. Be a good listener. Encourage others to talk about themselves.
5. Talk in terms of the other person’s interests.
6. Make the other person feel important – and do it sincerely.

Win People to Your Way of Thinking

Be a Leader: How to Change People Without Giving Offense or Arousing Resentment

1. Begin with praise and honest appreciation.
2. Call attention to people’s mistakes indirectly.
3. Talk about your own mistakes before criticizing the other person.
4. Ask questions instead of giving direct orders.
5. Let the other person save face.
6. Praise the slightest improvement and praise every improvement. Be “hearty in your approbation and lavish in your praise.”
7. Give the other person a fine reputation to live up to.
8. Use encouragement. Make the fault seem easy to correct.
9. Make the other person happy about doing the thing you suggest.

How did How to Win Friends and Influence People shape the person I became?

Practicing the principles of this book made it possible for me to begin connecting with people outside of my comfort zone (which was – and to a degree still is – very small). Before I read this book, the impression others had of me was of someone very quiet, aloof, and, well, cold.

Following the ideas in the book made me break out of my shell. This is perhaps the best thing that’s ever happened to me. I no longer feel apprehensive about meeting people or about giving speeches. I used to be scared to participate in group conversations; now I can jump right in and lead them. I used to be completely locked up by stage fright if presenting to more than four or five people; now I can talk to hundreds or thousands without breaking a sweat.

In short, this book made it possible for me to escape from my shell and find a place in the real world, in the social world, interacting with others.