The Intelligent Investor: The Investor and Inflation 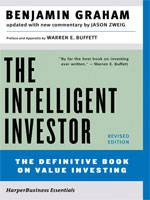 This is the third in a weekly series of articles providing a chapter-by-chapter in-depth “book club” reading of Benjamin Graham’s investing classic The Intelligent Investor. Warren Buffett describes this book: “I read the first edition of this book early in 1950, when I was nineteen. I thought then that it was by far the best book about investing ever written. I still think it is.” I’m reading from the 2003 HarperBusiness Essentials paperback edition. This entry covers the second chapter, which is on pages 47 to 57, and the Jason Zweig commentary, on pages 58 to 64.

It’s a word I’ve never liked. It represents an erosion in everything we work hard for. It naturally devalues our investments, working against growth. It causes items on the grocery store shelves to inch up in price, completely out of our control.

When my father was a boy, he would go to the gas station and fill up tanks of gas for his boat motor. The cost? Sixteen cents a gallon. Right now, I can buy a gallon for about $2.70 – that’s a sixteenfold increase. Over those sixty years, the price of a gallon of gas doubled, doubled again, doubled again, and doubled yet again.

It’s inflation that makes putting dollar bills under your mattress a completely worthless investment. Even if you did nothing more with your money than put it in a savings account bearing 2% interest, you’d still be protected at least a little bit against inflation. A dollar put away in that 2% interest savings account for sixty years would be worth $3.28 – better, but still not that sixteenfold increase we’d need to keep up.

The other solution would be to just invest everything in the stock market, but if 2008 has shown us anything, the stock market is a huge roller coaster. You might be way ahead of inflation a few years, then lose most of those gains the next.

How can an investor simultaneously protect themselves against risk and at the same time keep up with (or ahead of) inflation? That’s Graham’s topic here.

Chapter 2 – The Investor and Inflation
The biggest point that Graham makes in the chapter is that there really is no true hedge against inflation. He mostly looks at stocks, pointing out that ups and downs in the stock market are largely uncorrelated with the onward march of inflation. He also looks at the history of other assets and finds much the same – gold isn’t a great long-term hedge against inflation, either.

Another point I found really interesting: Graham suggests that, for your own calculations, you assume 3% annual inflation. He made this prediction in 1972 based on historical data, so I was curious to see how it stacked up. Lo and behold, he’s not that far off. Except for a rough patch at the end of the 1970s, annual inflation rates indeed average out to right around 3% over the long haul. There are some patches that are lower, with percentages in the 2s and even the 1s, and some higher, but the average isn’t all that far off since 1972.

I think it’s fairly reasonable to use that 3% number – or 3.5%, if you want to be conservative and guess a strong inflationary rate. It’s what Graham called almost four decades ago and it’s been pretty accurate over the long haul since then.

What about investment choices? Graham’s conclusion is that diversification is key. You shouldn’t put all your money into stocks (because of the volatility risk), nor should you put everything into bonds or cash (because they usually don’t earn enough to beat inflation). Balancing these two is the right way to go. In Graham’s words:

Just because of the uncertainties of the future the investor cannot afford to put all of his funds into one basket – neither the bond basket […] nor in the stock basket, despite the prospect of continuing inflation.

Commentary on Chapter 2
Zweig does a great job of pointing out why inflation is sneaky.

There’s another reason investors overlook the importance of inflation: what psychologists call the “money illusion.” If you receive a 2% raise in a year when inflation runs at 4%, you will almost certainly feel better that you will if you take a 2% pay cut during a year when inflation is zero. Yet both changes in your salary leave you in a virtually identical position – 2% worse off after inflation.

A great return is nice, but it’s not all that great if it happens during a period of high inflation. Zweig immediately points to the late 1970s and early 1980s, where you could get a CD at 11% and it still wouldn’t even keep up with inflation.

As I write this, inflation is at roughly 5 to 6%, depending on the figure you use. The CPI (a common measure of inflation) actually fell from August to September 2008, so that rate of inflation may actually be going down. In comparison, as Zweig points out, we were barely at 2% inflation from 1997 to 2002.

The point? Inflation is not constant. And it’s not something you can predict, either. Instead, it’s a constant reminder that your dollar today will be worth less than a dollar tomorrow, slowly but surely. That’s a big reason why investing is worthwhile – investing helps your dollars keep pace with that growth, usually ahead of it, sometimes behind it, but always moving against that force.

One avenue that Zweig explores as a hedge against inflation are TIPS – treasury inflation-protected securities. These increase in value directly with inflation – if inflation is high, these return well. However, Zweig encourages you only to buy them in retirement accounts where you won’t be whacked with a tax penalty, because the taxation on TIPS can keep you on your toes otherwise.

Next Friday, we’ll look at Chapter 3: A Century of Stock-Market History: The Level of Stock Prices in Early 1972.