This is the sixth of twelve parts of a “book club” reading and discussion of Dave Ramsey’s The Total Money Makeover, where this book on debt reduction is teased apart and looked at in detail. This entry covers the seventh chapter, finishing on page 132. The next entry, covering the eighth chapter, will appear on Wednesday. 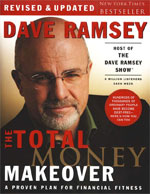 You’ve got a big pile of debts in front of you. They’re scary. The totals of all of the debts takes your breath away when you think about it. You don’t know where to start. You need a plan.

Dave Ramsey calls his plan the “debt snowball,” and it’s based on psychology, not math. If you’re going for pure math, the best way to pay off your debts would be to start with the one with the highest interest rate, since that will save you the most interest per dollar that you pay back.

Dave’s plan is different – he encourages people to pay back their debts from smallest balance to largest balance. The smallest balance debt gives you a “win” as early as possible in your debt repayment – which is a huge psychological boost.

Do I buy it? I played with the numbers a while back and my conclusion was that the difference between the plans – unless you’re talking about enormous debt loads with huge disparities in interest rate – doesn’t save you enough to not try the debt snowball method.

Identify the Enemy
On page 109, Dave makes a worthwhile point about figuring out what you’re working against:

The bottom line is that it is easy to become wealthy if you don’t have any payments. You may get sick of hearing it, but the key to winning any battle is to identify the enemy. The reason I am so passionate about getting rid of debt is that I have seen how many people make huge strides toward being a millionaire in the short time after they get rid of their payments.

I agree with this to a large extent, but I don’t think Ramsey really spells it out fully here or even later in the passage. If your goal is financial freedom, the enemy is unnecessary spending, not the debt. Debt is merely a symptom of that problem.

Let’s say you spend $100 more a month than you bring in without anything in the bank. This behavior means that you’re building up debt. Make a handful of spending changes and now you’re spending $100 less than you bring in. Put that extra $100 towards the debt and it goes away. Then you can start saving that $100 (and probably more, since you don’t have those debt payments to cover) towards a big goal.

Debt Repayment Is Hard
Ramsey argues that repaying your debts is hard on page 111:

This is the toughest of all the Baby Steps to your Total Money Makeover. It is so hard, but it is so worth it. This step requires the most effort, the most sacrifice, and is where all your broke friends and relatives will make fun of you (or join you).

Is it that hard? I think it’s hard in the sense that when you’re standing there at the starting line of a marathon, the finish line looks impossibly far away. Then you start running and you’re caught up in the race. You get into a rhythm, you’re gliding along, and before you know it, the finish line is there.

Lao-Tzu was absolutely right. “A journey of a thousand miles begins with a single step.”

That first step is the hardest part.

It definitely was the hardest part for me. I knew for a long time that “someday” I’d have to fix my debt problems, but that “someday” was always put off into the future.

Then, finally, I was forced into taking that first step. The fear of not taking a step grew greater than the fear of getting started.

But once I took that first step, the second one was easier, the third one was easier, and before you know it, I’m well along the path and it’s like a slow train coming around the bend, clickety clack.

Math Versus Behavior
The idea of psychology versus numbers comes to a head on page 111:

We have discussed that personal finance is 80 percent behavior and 20 percent head knowledge. The Debt Snowball is designed the way it is because we are more concerned with modifying behavior than correct mathematics. […] Being a certified nerd, I always used to start with making the math work. I have learned that the math does need to work, but sometimes motivation is more important than math. This is one of these times.

Some people get irritated if they think they’re doing things in a way that’s even slightly suboptimal and are also self-motivated enough to push through. Frankly, there aren’t too many of those people – those that are out there are probably not considering the “debt snowball.”

So, I think Dave’s plan works quite well.

How It Works In Detail
He lays out the plan in a single paragraph on page 114:

The Debt Snowball method requires you to list all your debts in order of smallest playoff balance to largest. List all your debts except your home; we will get to it in another step. List all of your debts – even loans from Mom and Dad or medical debts that have zero interest. I don’t care if there is interest or not. I don’t care if some have 24 percent interest and others 4 percent. List the debts smallest to largest!

This is a very good first step, but I don’t think it’s quite the final step.

Once you have that list, it’s worthwhile to call up each of your creditors and negotiate a bit. The big move is to ask for a lower rate on each of your credit cards. Some people get paranoid with this, asking things like “What if they cancel my card?” Well, what if they do? If you’re committed to reducing your debt, that shouldn’t be a real problem.

Once you’ve tried those things, your list will be different – and easier. Cross off those debts that you consolidated – they’re done! At that point, rewrite your list, again with the debt with the lowest balance on top.

Then comes the hard work – paying them off.

The Big Payoff
Dave explains why it’s a snowball on page 117:

After you list the debts smallest to largest, pay the minimum payment to stay current on all the debts except the smallest. Every dollar you can find from anywhere in your budget goes toward the smallest debt until it is paid. Once the smallest is paid, the payment from that debt, plus any extra “found” money, is added to the next smallest debt. (Trust me, once you get going, you will find money.) Then, when debt number two is paid off, you take the money that you used to pay on number one and number two and you pay it, plus any found money, on number three.

The part I found interesting here is this one: Trust me, once you get going, you will find money.

This is absolutely true, but it’s something people can scarcely believe when they first start. Once the debt starts slipping away, you start to really get into it. I know I certainly did. Watching the debt getting smaller and smaller is really exciting, and you want next month to be even more awesome. So you start looking for ways to save. You start looking for things to do differently.

And you find them.

After all, you wouldn’t be in debt trouble to begin with if you were spending your money in an optimal fashion.

There’s Not Enough Money To Get Started!
There usually is if you do things the right way. On page 124, after a story about a logjam on a river:

When the dynamite blew, logs and pieces of logs would fly into the air. After working so hard to cut the trees, some of them were a total loss. They had to blow up some of the timber to get the rest of the crop to market. That’s the sacrifice the situation required. Sometimes that is what you have to do with the stopped-up budget. You have to dynamite it. You have to get radical to get the money flowing again.

Radical usually gets people uncomfortable. I know this from experience – people don’t mind frugal tips as long as they’re easy, but I start getting flamed if I suggest something personally challenging. Cancel the cable? You’ll pry the remote from my cold, dead hands. Sell your car? Get a rope.

Here’s the thing, though. When you sit down and rationally consider getting rid of something you consider beyond question, quite often you find that it’s not really a bad move at all to get rid of it. Getting rid of cable is completely unthinkable to many people until they think about it. What are they getting from the cable that isn’t fulfilled by other avenues, like Hulu.com or over-the-air television or a $1 DVD rental once a week?

What about selling a car? I can’t stand the loss of freedom! What freedom? How often do you use the car in a way that isn’t served by the metro or a short walk or a bit more careful planning? Is it really worth the insurance cost to keep it around?

Look at something big. Ditch your house and move into an apartment. Rent out a room. Give up all beverages but water. Sell your television. The impact of a truly big move will be like a tidal wave over your debt – or any other big financial goals you have.

Do you have any other thoughts on this chapter of The Total Money Makeover? Please share them in the comments – and feel free to respond to any of my impressions as well. After all, a good book club is all about discussion!