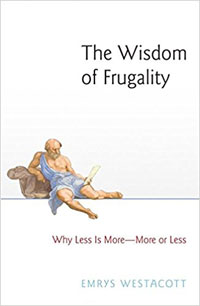 This is the fourth entry in an eight part weekly series that provides a detailed look at the book The Wisdom of Frugality by Emrys Westacott. If you’re new to the series, feel free to hop back to the first entry.

In this chapter, Westacott turns his vision to one of the most difficult questions when it comes to frugality: If the benefits of frugality are so obvious and so widely supported by philosophers, why isn’t it widely adopted in the general populace? In America, 78% of Americans live paycheck to paycheck, and even among those who don’t, many households don’t have a whole lot of financial breathing room. How can the benefits of frugality be so obviously positive, yet the vast majority of people don’t practice frugality?

One plausible explanation, offered by Nietzsche, is that philosophers – and other people invested in avenues of life that involve a great deal of self-reflection – tend to value frugality more than the mainstream. Philosophy and self-reflection tend to nudge people toward frugality over time, in other words. Think about career paths that are oriented toward self-reflection and philosophical thinking – careers like social work and education and the humanities. They tend to have a tradition of frugal living embedded in them.

Still, that doesn’t answer the question related to those who don’t dedicate large portions of their life to self-reflection. Why doesn’t frugality appeal to most people beyond merely an ideal that they don’t actually follow? Why do most lifestyles in the West run contrary to frugal ideals?

Westacott breaks the reasons for why frugality isn’t widely practiced into three main groups: frugality itself is challenging and dangerous, wealth and affluence have a great deal of appeal, and there are benefits to being acquisitive.

The Challenges and Dangers of Frugality

Frugality may have incredible benefits, but it is not without its dangers and flaws, many of which are exposed when people commit to intense levels of frugality. Westacott focuses on four dangers of frugality that are always present, but are particularly exposed when people commit to intense frugal living. These four points offer an explanation, to an extent, of why “cheapness” is considered a bad thing and many people in the West who adopt intense frugality eventually dial it back.

First, a mercenary-like attitude centered around an obsessive focus on saving can unbalance one’s life. A miserly attitude can cause one to miss out on many of life’s joys because it absorbs all of the focus in one’s life. This can create damage to one’s personal relationships and social life and lead to a sense that life is all about minimizing spending and maximizing one’s savings rate, which can squeeze the joy out of many areas of life.

Second, an overconcern with avoiding loss leads to poor decisions. This is otherwise known as the “sunk cost fallacy,” when a person believes that they must utilize something that they’ve invested money in regardless of the other options on the table. For example, let’s say you bought tickets to a baseball game but then an old friend comes to town, but you turn down spending time with that friend because you can’t stand the thought of losing the money you put into those tickets. The thing to remember here is that the tickets are a sunk cost – regardless of what you might choose to do, that money is gone. Those tickets merely represent another option you can choose from within that timeframe – the money is gone regardless of what you choose, so you should always choose the best option available in that moment regardless of what you might have invested prior to that point.

Third, frugality can lead to ungenerosity, because a focus on “bang for the buck” argues against charity because there is no real tangible return on charitable giving. If you’re focused intensely on minimizing your spending, it’s hard to make a case for charitable giving and generosity because the return on that giving isn’t obviously apparent and giving reduces one’s financial state. Thus, a strong focus on frugality nudges a person gradually toward being less generous and less helpful toward others.

Finally, a strong frugal mindset can led to stagnation and a lack of motivation to improve. A big part of a successful frugal mindset is pushing back the idea of “more” in terms of one’s possessions and, to an extent, personal experiences. However, personal progress in social, artistic, physical, mental, and intellectual goals are often centered around “more” – more relationships, more knowledge, more skills, and so on. Frugality often argues against trying new experiences and encourages stagnation in many aspects of life, which can hinder self-improvement.

A frugal person owes it to themselves to be aware of these dangers and to work around them. Miserliness, loss avoidance, ungenerosity, and general life stagnation are all things that can be avoided, but are easy traps to fall into if you subscribe too intensely to a frugal perspective on life.

The Appeal of Wealth and Affluence

Another reason that frugality is a hard sell is the persistent view in American life that wealth and affluence is the key to a happy life. This notion has a strange tension with the idea of frugality, primarily because one of the most efficient ways to have some semblance of an affluent life is to not be frugal at all and spend every dime that you make. This is the route that many Americans follow – they perceive a more affluent life with marginally better items and marginally better experiences as a “better” life and thus are willing to spend every dime they make to achieve it.

Some people take this notion to the next logical step and realize that accumulation of wealth is a great way to ensure a sustainably affluent life or a higher degree of affluence and thus chase wealth as a life goal. Frugality can be a tool in this ambition, but the more common tool used is simply earning more money and accumulating that money.

It’s worth pointing out here that wealth in and of itself isn’t a bad thing to have; in fact, if paired with a strong vision of the life you wish to have, it can be an extremely good thing. Wealth can provide life security and offers the opportunity for leisure, freedom, pleasure, and generosity, all of which are things associated with happiness. Wealth also increases one’s power and (often) one’s social status, and it can also theoretically alleviate the temptation of wrongdoing (most petty crimes lose their appeal if you’re wealthy).

First, wealth provides more choices in life, but more choices aren’t necessarily a net positive. This is referred to as the paradox of choice, in which more options tend to result in far more decision stress. I like to think of it in terms of my childhood – when there were only three channels on television, there was always something to watch, but now when there are infinite options, there’s nothing worth watching. That’s true in many aspects of life – the more options you have, the more challenging and stressful it can become to actually make a decision and stick with it.

Second, wealth inequality can cause social and familial problems. This is why many people are loathe to let their family members or even some of their friends know about their financial success, because they know they’ll be asked for money and be expected to shoulder more of the financial burden of shared costs. Many social and familial relationships fall apart if one person finds a much higher level of financial success than the other.

Third, there exists a surprisingly low saturation point above which additional money does not bring additional happiness. Different estimates of this exist, but in general, incomes above somewhere in the $70,000 to $100,000 a year range (depending on your location in America) does not bring any increase in personal happiness. The perks above that income level are counterbalanced by the paradox of choice, the social stress, and other complications.

Finally, additional wealth is often used to fuel a “collector” mindset, which often produces overkill. Once you have a certain amount of anything, having more doesn’t produce a net additional happiness and often produces unhappiness as you’re trying to figure out how to even deal with more. Owning five books is fine – owning 500 can be a problem of inventory. Going on a trip once a year is fine – going on a trip once a week disrupts all kinds of life patterns and makes planning very difficult.

The Benefits of Consumption and Acquisitiveness

The reality is that most people are naturally acquisitive about at least some things in their life. Most of us want more of something than what we currently have – and, again, that’s not necessarily a bad thing, though it flies in the face of general advice on frugality.

It’s natural for people to want money, in other words, and when that level of desire is reasonable and held in check by other values, it can drive us to incredible achievements and a wonderful life.

As with many things in life, however, acquisitiveness and consumption, when taken to excess, becomes problematic.

For some, it becomes a game. How much money can I accumulate? When you treat it as a “game” in which you keep “score,” how exactly do you “win”? You don’t. You just keep accumulating, and if you let the game become too all encompassing, you begin to sacrifice other values to it.

What is excessive, though? Who decides when the acquisition of wealth and possessions has gone from reasonable to excessive? There is no standard – it’s in the eye of the beholder.

Having said that, wealth is often used in positive ways, and even greed can be a powerful tool for good.

Many people who simply wish to accumulate wealth invest that wealth into new enterprises, which in some cases develop new products that benefit people and also employ people to develop and manufacture those products.

Many people use their accumulated wealth to do good. The examples of Andrew Carnegie (who founded countless libraries with his wealth) and Bill Gates (whose Gates Foundation has done tremendous good in the world) are shining examples of how wealth accumulation can be turned around to provide great things for the world’s people.

In the end, it’s not so much wealth itself that leaves a bad taste in people’s mouth, it’s the unethical behavior that sometimes comes along with excessive focus on acquisitiveness and accumulation of wealth. Most people find robber barons and unethical traders to be awful people; the Gordon Gekkos of the world are not well loved.

When you consider these factors all together – the acquisitiveness of human nature, the appeal of wealth itself, the challenges of frugality, and the nature of our current culture in highlighting wealth – it’s not surprising that frugality is a very hard sell for most people. While frugality may be one of the keys to a good life, the pathway to that good life isn’t as clear as the appeal of a life of luxury.

What happens if you take mere wealth accumulation and acquisitiveness a step further and it becomes extravagance? That’s what we’ll look at in the next entry in this series, which covers the pros and cons of extravagance.