What Color Is Your Parachute?: The Things School Never Taught Us About The Job-Hunt 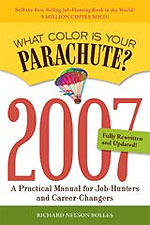 This week, The Simple Dollar is reviewing the latest iteration of the classic job hunting book What Color Is Your Parachute? It was named one of the Library of Congress’s 25 Books That Have Shaped Readers’ Lives more than a decade ago; is this updated version still as powerful today as it was then? This week, let’s find out.

The first section of the book was also the most boring one – it was basically a generic job-hunting guide that didn’t really offer anything surprising. The parts of the book that were really effective were the second and third sections – but those will wait until tomorrow.

Chapter 2: The Nature of the Job Market
The moral of the story is that the world doesn’t owe you a job, but you also aren’t your employer’s slave, either. In other words, the best job for you is one that has personal value for you, so that you enjoy and want to work effectively in the job.

Chapter 3: How Much Help Is The Internet?
In a nutshell, it’s good for self-evaluation, for research, and for making contacts. Outside of these, the internet is largely rubbish in terms of advancing your career. The Simple Dollar focuses on two of these areas, self-evaluation and research.

Chapter 4: How To Deal With Handicaps
Focus on maximizing what you can do, not what you can’t do. The idea of making a list of your skills, starting each one off with an action word, is a very good one for building up your confidence.

Chapter 5: Resumes: How To Get In To See An Employer
This chapter is actually not about resumes – it’s more about a variety of ways to get your foot in the door with an employer of your choosing. The idea I found useful was the one of persistence: ask everyone you know if they know someone at the company, then ask anyone who does know someone at that company if they would make the contact for you.

Chapter 6: Interviews: The Employer’s Fears
This is one of the best single pieces I’ve read on preparing yourself for an interview. In fact, it may be where I became convinced of the value of personal appearance and

of etiquette. The best advice I’ve ever heard for an interview is to end that interview by directly asking the employer, “Can I have this job?” It exudes the right kind of self confidence.

Chapter 7: Salary Negotiation: Getting Paid What You’re Worth
This section closes with an overview of the salary negotiation process, which basically boils down to letting the employer state that they want you and also having them state how much they want to pay you. Information is the key, and you should maximize it.

Tomorrow, with the second section, the book starts to get interesting.

What Color Is Your Parachute? is the eighteenth of fifty-two books in The Simple Dollar’s series 52 Personal Finance Books in 52 Weeks.