Your Money or Your Life: The Crossover Point 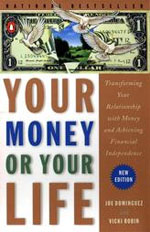 This is the twenty-third part of The Simple Dollar Book Club reading of Your Money or Your Life. Want to know more?

This concept fascinated me so much that I had to write a post specifically about it when I first read Your Money or Your Life.

In a nutshell, the “crossover point” is the exact point in time in which your income from investments surpasses your monthly income. At that point, you can basically do whatever fulfills you the most and not worry about the pay – you’ve completely destroyed the link between how you spend your productive time and the money you have in your pocket. In a way, this is basically the ultimate definition of financial independence – you can go on living your life whether you’re paid or not.

Some people have different terms for this. Personally, I call it walk away money, meaning that it gives you the freedom to simply walk away from aspects of your life that aren’t personal duties but don’t fulfill you, either – primarily, this refers to one’s job.

To illustrate all of this, let’s back up and look at something first. 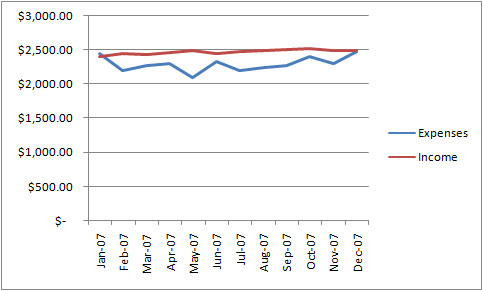 This shows the income and expenses of an average person over an average year. Notice that that person is fairly sensible in his spending, so for almost the entire year, his spending is less than his income. That means he’s getting into a better financial position. Let’s add another line. 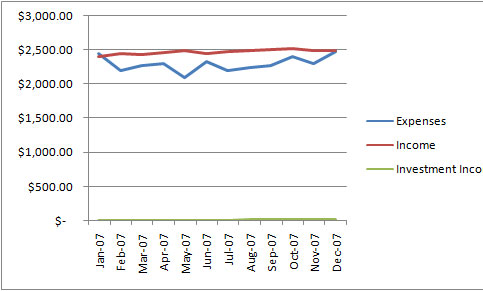 See that little yellow line along the bottom there? That indicates the income that this person would make just from investing the difference between his spending and his income, putting it in a relatively safe mutual fund that returns 7% a year. Over the first year, it’s not much, but let’s increase the time scale to, say, thirty five years. 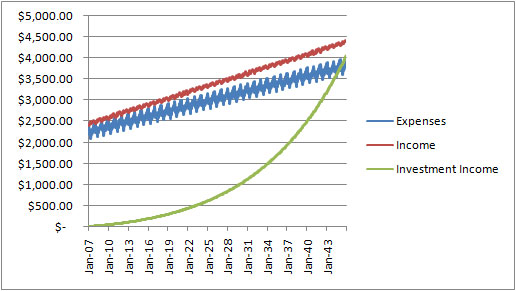 That little yellow line just represents the income each month off of the invested money, and that invested money is just the difference between spending and earnings each month. The fellow’s income is steadily going up, as are his expenses, but because he invests that difference (and leaves the investment income in the account), sometime in 2043 this person’s investment income becomes greater than his regular income. This is the crossover point, because now that person can quit his job and live his current lifestyle.

That’s a very long time, so let’s see what just a bit of frugality does to this story. Let’s say the person changes out some light bulbs for CFLs, eats at home more often, and cuts down on his taste for wine. This reduces his spending by $100 a month. Let’s see what this graph looks like: 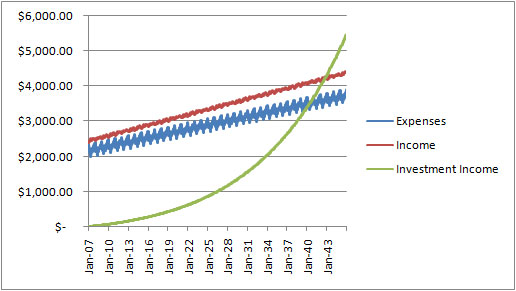 Just by doing a few simple frugality exercises, this person can quit their job three years earlier. Even more amazing, the line of total income is crossed as well in early 2042, meaning that he could quit at that point and continue to build the investment at the same rate.

That’s damn exciting, so let’s say this person is also excited and chooses to make some bigger frugality moves. He buys a smaller house (that still fits his needs) and drives his car a bit longer than he would have otherwise. On average, he trims off another $200 a month from his expenses. What does that look like? 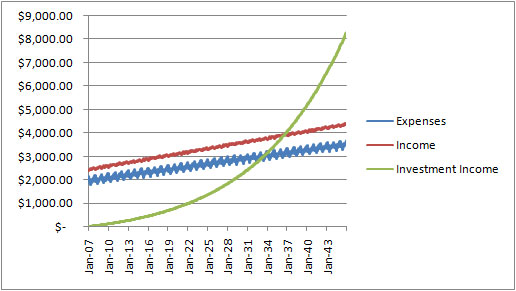 In mid-2032, just 25 years, this person can walk out the door and live off of his investment income. This is the real kicker in the book – frugality and steadiness pay off big time. They give you freedom to literally do whatever you want – volunteer work, write the Great American Novel, even sit in your underwear all day and play Guitar Hero. Whatever your passion is, being frugal and spending less than you earn can take you there.

Tomorrow, we’ll continue with the eighth chapter, “The Crossover Point,” starting at the subheading “The Power of Working for a Finite Period of Time” and continuing until “Voluntary Action: The Freedom to Choose What You Do and Do What You Choose.” This section appears on pages 268 through 279 in my paperback version of the book.