74 Million Americans Have More Credit Card Debt Than Savings: What to Do If You’re One of Them

A recent report from Bankrate found that a staggering 74 million Americans now have more credit card debt than emergency savings, which is the highest that figure has been in nine years.

Looked at another way, only 44% of American households have more emergency savings than credit card debt, according to the same report. That’s the lowest that savings-to-debt ratio has been in nine years.

Also noteworthy: The deterioration of the American households’ emergency savings relative to credit card debt extends across both genders, all ages, all educational backgrounds, all income brackets, and political party affiliations.

“Consumers should make hay while the sun shines. Now is the time, with unemployment low and wages rising, to right-size the equation by paying off high-cost credit card debt and adding to emergency savings,” said McBride.

If you happen to be among the 74 million Americans struggling to get out from under a mountain of credit card debt, while fretting about having zero savings in the bank, the dilemma is often which challenge to address first? Save money? Or pay off debt? Or try to do both? Here’s what personal finance and credit experts had to say about finding a financially stable path forward.

When faced with more credit card debt than savings, there’s rarely one best solution that applies to everyone, begins David Gafford of Shift Processing, a credit card processing company. However, in most cases it’s going to be a wiser move to pay off high-interest debt before building savings, he said.

“The reason this makes sense is because if you’re paying more in interest on credit card debt than you’re making on the interest you gain by saving, you’re still losing money,” Gafford explained.

James Lambridis, founder and CEO of Debt MD, a startup that connects people with professional help to become debt-free, also urges paying off debt first before worrying about savings.

“We live in an age where people are constantly comparing their lives to those of their peers, especially through social media. Many people finance their extravagant lifestyles with credit cards in order to ‘keep up with the Joneses.’ As a result, some people have zero savings, and loads of credit card debt. When faced with this situation, your number one priority should always be to pay the debt off first before trying to accumulate savings,” said Lambridis.

“With the average interest rate on a credit card being around 16%, if the balance isn’t paid off in a timely manner, you’ll end up paying double or sometimes even triple the principal balance,” added Lambridis, who says paying such high interest on a mountain of credit card debt is the metaphorical equivalent of bleeding money.

Speed Up the Process of Eliminating Debt

To help rid yourself of debt even more quickly, start eliminating unnecessary household expenses and put that saved money toward your credit card bills.

“You need to be tracking your actual income and expenses down to the penny,” says Michael Kern, a CPA and founder of Talent Financial, a personal finance and small business consulting company focused on helping people get their finances in order.

“Go line by line and cut any expenses that are not necessary,” continued Kern. “This will allow more income to flow into savings and paying off debt, which will ultimately get you to your financial goals faster.”

Yet another critical step when trying to rid yourself of credit card debt is shifting the balances to a lower interest rate financial vehicle. From zero-interest balance transfer cards to personal loans, there are several options for doing this, says Lambridis.

“A debt consolidation loan can wrap all of the payments into one lower monthly payment at a lower interest rate and give you a concrete finish line for when the debt will be paid off,” he suggests.

Another option is enrolling in a debt management plan offered through credit counseling agencies, which can also help lower interest rates while helping you to pay off the debt in three to five years, said Lambridis.

“When you enroll in a debt management plan, whichever cards you enroll are closed, so you will not be able to use them,” Lambridis explained. “You make one payment to the credit counseling agency, and they disperse the funds to each of your creditors at the newly agreed-upon payback terms.”

Often, there’s a small fee to sign on for a debt management plan (around $50), said Lambridis. In addition, there will likely be an ongoing monthly maintenance fee, which is also around $50, depending on which agency you choose.

In some cases, it can be a good idea to work on establishing an emergency savings even while you still have significant credit card debt. For instance, Gafford suggests that if your debt already has a very low interest rate, go ahead and start putting money into savings for a rainy day.

Ben Watson, CFO at DollarSprout.com, a personal finance and entrepreneurial website, suggest creating a mini-emergency fund while you’re working to tackle debt. Don’t aim to have the standard six to 12 months’ worth of expenses squirreled away that advisors often recommend. Instead set a target of having at least $500 to $1,000 set aside for legitimate emergencies, he says.

“If you’re starting from zero cash, spend a weekend or two cleaning out the attic, garage, and spare room and sell things you don’t need anymore,” said Watson. “Go full Marie Kondo on your place and list items on Facebook Marketplace, eBay, or have a garage sale. Anything you haven’t even thought about for more than 12 months should be considered as potential cash. There are tons of simple ideas to make a quick buck on the internet, find one that fits you and go for it.”

A Lifestyle Out of Control

Mike Pearson, founder of CreditTakeoff.com, suggests the challenge so many Americans are now facing — having more credit card debt than emergency savings — has a great deal to do with how we frame the issues.

“[It’s] not a matter of simply not having enough money, but rather having your spending totally out of control,” explained Pearson. “When you control your spending, everything else — including debt payoff and savings — falls into place.”

In other words, he says, the best way out of this situation is to create a reasonable budget, stick to it, and at the end of the day, know that you simply cannot spend more money than you earn.

“If you take home $2,500 after taxes each month, then your expenses cannot exceed $2,500. Simple concept to understand, but much more difficult to apply in real life,” said Pearson.

Only when you’ve mastered this concept, however, can you truly start to make progress paying down your credit card debt and building up your emergency savings — because you will actually have money available to address both of those problems.

“Some will say it’s a good idea to have a $1,000 emergency fund first, just in case something bad happens. Others will say pay off credit card debt first because you’re getting killed with interest charges,” concluded Pearson.

“At the end of the day, it doesn’t really matter… Much more important than picking which one to tackle first is to understand both of these issues come back to spending. If you don’t get your spending under control, you will never climb out of debt and you will never have savings.” 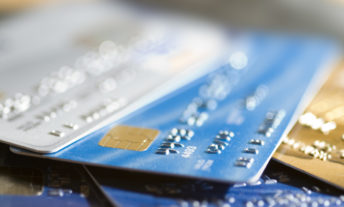 Zero Interest Payments With This Trick