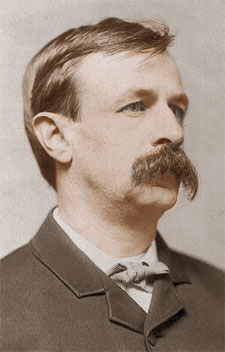 One might have expected that the person who unleashed the credit card on the world would have been a captain of finance, an individual who headed a large bank (or at least an officer at one) or perhaps was the founder of MasterCard or Visa or Diner’s Club. In fact, none of the above were actually true. The person who first developed the idea of the credit card (in the modern sense) and pushed that name into the public domain was a college dropout utopian science fiction writer named Edward Bellamy.

… a credit card issued him with which he procures at the public storehouses, found in every community, whatever he desires whenever he desires it. This arrangement, you will see, totally obviates the necessity for business transactions of any sort between individuals and consumers.
– Edward Bellamy, Looking Backward, 1888

So who exactly was Edward Bellamy? He was a child of a Baptist minister whose teen years overlapped with the Civil War. He attended Union College, but didn’t graduate, and instead found himself working briefly in law, then in journalism, before devoting himself to literature. His biggest hit by far was Looking Backward, a utopian science fiction novel in which the main character falls asleep in 1887 and wakes up in the year 2000 to find that society has become a socialist paradise.

This novel, Looking Backward, is quite impressive in terms of making predictions about how credit cards work in the modern era, even down to the concept of one receipt for the customer and one receipt for the buyer. Remember, this book was written in 1888, a time in which credit basically only existed as a method for individual stores to enable individual buyers to buy extra items. The idea that you could merely take a card into a store, swipe it, have the item paid for, and receive a receipt in this fashion was, well, the work of science fiction.

“The duplicate of the order,” said Edith as she turned away from the counter, after the clerk had punched the value of her purchase out of the credit card she gave him, “is given to the purchaser, so that any mistakes in filling it can be easily traced and rectified.”
– Edward Bellamy, Looking Backward, 1888

The novel itself isn’t the most easy read in the world, but it is loaded from top to bottom with intriguing ideas, particularly if you are a socialist. The credit card system described in the book, in fact, is backed by the full faith and credit of the American government, meaning that each person is given a certain line of credit on their card and the government uses part of the GDP to pay off that credit. In some ways, the credit card described in the book, for the consumer anyway, is more like a debit card, although functionally the government is extending credit to individuals here – it is merely a given that the individuals will receive a slice of the nation’s wealth each year that will be used to pay off the card balance.

The book not only predicted credit cards and their usage, but it described the modern department store in great detail, envisioning it much like a warehouse that stocked every variety of goods in great abundance, and individuals could visit these warehouses and select whatever items and varieties of items they liked. They would then approach the checkout, present their credit card, and then walk out the door with the purchased item in hand. Sound familiar? To a modern individual, it certainly does; in 1888, it was revolutionary.

“An American credit card,” replied Dr. Leete, “is just as good in Europe as American gold used to be, and on precisely the same condition, namely, that it be exchanged into the currency of the country you are traveling in.”
– Edward Bellamy, Looking Backward, 1888

The concept was so well described that Bellamy even predicted the ease of use of the credit card in other nations, as he describes the card easily being used to exchange between currencies. Again, in 1888, currency exchanges were possible, but the idea of a single device being able to cover purchased items in multiple countries was fanciful.

Bellamy laid out all of these concepts in 1888, but it took decades before society and technology caught up with his vision. It wasn’t until 1950, when the Diner’s Club card was introduced, that the modern credit card came into actual existence, and it was still decades after that before such cards became an expected part of the American consumer experience.

So, here’s to you, Edward Bellamy. Your creativity and vision transformed the way that Americans today use and manage their money, for better or worse. Regardless of your feeling on credit cards, it has undeniably had a transformative effect on America, and the ideas behind it – so simple, yet so incredibly powerful – came from the mind of one man punching away at his typewriter in the 1880s.

Loading Disqus Comments ...
Latest from Trent
How to Adjust to Work-From-Home Life
Questions About Rebalancing, Roth Contributions, Cash in Hand, Disney+, and More!
Eight Useful, Frugal Projects You Can Do to Save Money
Read more from Trent
Featured on: