Which Debts Should I Pay Off First to Raise My Credit Score?

There’s no doubt that any progress toward eliminating your debts is a smart move, both for your credit reports and your wallet. However, it’s even smarter to pay off your debts in the right order. Knowing which debts to target first, and which debts to leave for later, could potentially save you a lot of money, get you out of debt faster, and boost your credit score, too.

Should you pay off your student loan first, or tackle your credit card balances? What about your mortgage, auto loan, or personal loans? While there’s no “wrong” way to pay off your debt, there are definitely some strategies that might help you to improve your credit scores sooner rather than later.

Learn how to settle your debt. It’s quick and easy.

Start With Your Credit Cards

Generally speaking, it’s best to start with your credit card accounts when you’re ready to begin paying down your debt. Not only are these debts likely the most expensive you’ll ever carry, with interest rates in the high teens or higher, but carrying large balances on your cards will also have a negative impact on your credit scores.

Credit scoring models like FICO and VantageScore are designed to pay attention to the debt-to-limit ratios on your credit card accounts. This relationship between the credit card balances displayed on your credit reports and your account limits is formally known as your revolving utilization ratio.

When your revolving utilization ratio climbs because your balances start getting too close to your limits, you’ll generally end up with a lower credit score. In fact, 30% of your credit score points are based on that debt-to-credit-limit ratio.

Are you spending more than you earn?
Get out of debt fast
Want to be debt free?
Consider managing your debt
Wondering how to build good credit?
Learn how to build credit

Start With the Smallest Balances

So you should probably begin your debt elimination journey with your credit card accounts. But which credit card should you pay off first?

You probably want to work your way up from the bottom. First, make a list of all of your outstanding credit card debts, from the smallest balance to the largest:

By paying off the smallest balance first (ABC Bank in the example above), you’ll accomplish two important things: First, you’ll reduce your number of total accounts with balances. Second, you’ll bring the revolving utilization ratio on an individual account down to 0%. Credit scoring models will generally reward you for both of these actions.

Once you’ve paid off the smallest balance, you can move on to the next largest balance and repeat the process. This actually dovetails with the “Debt Snowball” approach to debt elimination, helping you build and maintain momentum with small victories in the critical early stages of debt reduction.

Just remember to continue making at least the minimum payment on all of your accounts to avoid late fees and potential credit score damage.

What About Installment Loans?

Most of the non-credit card accounts appearing on your credit reports will probably be installment accounts. These debts feature a fixed payment scheduled over a specific period of time. Mortgages, auto loans, and most personal and student loans fall into this category. 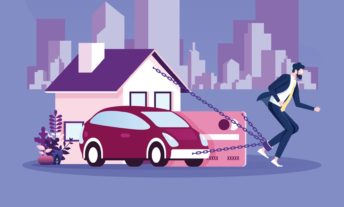