A Vacation Disaster and What to Do Next 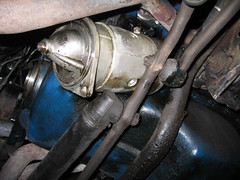 Last week, I spent seven days in northern Wisconsin at a cabin on Shell Lake, owned by a friend of a friend. It was truly wonderful – so rural that we were out of cell phone range, but with plenty of outdoor stuff to do. My wife and I went on a long canoe trip around part of the lake, we toured a nearby small(er) brewery, I got a lot of reading in, did a lot of swimming, and did absolutely no writing at all for a week. It was a refreshing and relaxing change of pace.

On our way home on Saturday, after a wonderful week at the lake, we loaded the kids in the back and headed back home to Iowa, a roughly seven hour car trip. We stopped in the first sizable town we came to (Cumberland, Wisconsin) and filled up with gas. I got back in the truck, turned the key, and….

I checked the batteries by turning on the headlights and radio and honking the horn. The battery was fine. That meant it was likely the starter, and thus it had quickly gone beyond my car problem diagnosis skills.

I wound up asking several people at the gas station for recommendations (including one helpful guy who tried to help me get my starter going by tapping on it), but I finally had to have the car towed to get the starter replaced.

Given that I was in a small town I was unfamiliar with, on a Saturday morning, with a truck full of luggage, I figured the bill would be well over $500 for a new starter, the cost of the tow, and the labor cost on my model of truck (I know from past experience that changing the starter in my truck model is a significant job). It turned out to be right around $400 in all.

Still, it was not a happy end to our family vacation. Our kids weathered it well – we merely walked to a park while the truck was repaired, which made my son really happy (he later said the two hours at the park was the best part of the trip).

It gets worse, though. When the truck was returned, the repairman showed me several things wrong with it that weren’t immediate disasters, but would have to be replaced soon: a worn-out flywheel, a transmission with leaky seals, and three or four other little things. He suggested that when I got back home, I look into replacing the truck, because, as he said, “you’re reaching that point where the repair bills are going to start really adding up.”

After arriving home and taking a few days to reflect on these events, the costs for our family in obtaining a new vehicle, and our family’s present and future needs, I’ve come to several discussion-worthy conclusions.

AAA may be worth it.

In the past, I’ve hedged my bets and not joined AAA because I wasn’t convinced that the annual membership fee was worth it (it varies from $30-70 annually depending on location and other factors, apparently). In one shot on this trip, I would have paid for two years’ worth of membership. Given that I now have two young kids in the car (meaning it’s a lot harder to just shrug my shoulders and just grab a hotel room for the night), I’m now leaning strongly towards a membership. Here’s Jim’s (from Blueprint for Financial Prosperity) thoughts on AAA, which confirm my perspective. What do you all think of AAA?

How long can I put off replacing my truck?

That’s really the key question, isn’t it? Since I work from home, I don’t use it that much – mostly for trips to the library in adjacent towns and grocery trips. My gut instinct is to keep it until early next summer, then replace it, simply because this gives me ample opportunity to save for the next vehicle purchase.

Do we really need two vehicles?

While I have my truck, my wife currently drives a small, fuel-efficient car to work, one that’s also getting up there in miles (though it hasn’t started having the “nickel-and-dime” problems my truck is developing). Since she’s the only commuter, is it reasonable for us to switch to one vehicle for the time being? We’ve largely decided against it because of redundancy – having two vehicles makes things a lot more flexible, especially with children to tote around.

What are the actual needs for my family?

Clearly, one automobile ought to be a fuel-efficient and reliable car for my wife’s commute. That’s one that’s out of the way. But what about that second vehicle? We currently have two young children and anticipate having at least one more in the next few years. That means that a reasonable car purchase for my family would require seating for five (including at least two car seats) – otherwise, we’ll be driving two vehicles while traveling. That, in turn, means either a minivan or a SUV is in my future.

I addressed this question last week, but now it really hits home. The comments on that post pretty much nail it – consider both, including the benefits (warranties, cash allowances, etc.) of a new purchase. In a down car market, the new one may end up being the best deal, especially since we’re leaning towards Honda or Toyota because of their reliability numbers – they’re hard to find late model used for much less than they are new.

How will I pay for it?

Time to start saving. Instead of tossing money into current debt repayments, I’m going to build up a nice hefty savings account for this car purchase, so that I can easily go for the best deal when the time comes around without taking out a loan.

In short, I have a lot to think about. Thankfully, the issue isn’t entirely in my face quite yet – I still have some time to consider what move to make. But as I sat there watching my truck get towed away in the middle of rural Wisconsin, I realized it was time to start taking these questions seriously.