Addicted to Spending? Here’s How to Become a ‘Recovering Spender’

Imagine waking up every day with an insatiable urge to shop. The second you get a chance, you check the racks and sales, desperate for the perfect gift, the perfect blouse, or anything to make your shopping trip worthwhile.

As you leave the store with a bag full of stuff, you’re over the moon with familiar feelings of euphoria and accomplishment. Unfortunately, this feeling is rather short-lived; soon, you’ll need to buy something else – something better – to maintain your glow.

For a lot of people, this is what addictive and compulsive spending looks like. Instead of getting high on drugs, addicted shoppers get high on the thrill of the chase and the excitement of buying something new.

And as with any other addictive behavior, problems arise when a compulsive shopper can’t stop searching for their next big rush. As their lives unravel, many addicted spenders begin to hide their purchases, lie about them, or use creative accounting to maintain a secret, separate life.

And if there’s one thing addicted shoppers always seem to have in common, it’s most certainly debt. Without an endless supply of money, it’s almost inevitable for compulsive shoppers to turn to credit to fulfill their high.

The problem is, the contentment never lasts for long. The debt and financial consequences, on the other hand, could last forever if the addicted shopper doesn’t change.

Life as an Addicted Spender 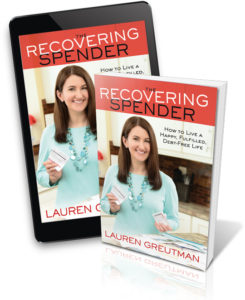 Lauren Greutman, author of the new Amazon bestseller “The Recovering Spender: How to Live a Happy, Fulfilled, and Debt-Free Life,” knows exactly what this life is like. Before Lauren and her husband Mark had a financial reckoning, Lauren was addicted to shopping at stores like Target and Hobby Lobby.

“Walking into those big red doors, grabbing a bright red shopping cart, and parading through the clean aisles of my favorite store was something I would do on a regular basis,” Greutman writes on her blog. “Those Target items would be calling out my name, and before I knew it I had walked away spending over $100.”

While occasionally dropping $100 at Target may not spell disaster, Greutman’s problems escalated substantially over time. Eventually, she even racked up $40,000 in credit card debt, most of which she kept secret from her husband. In the worst of times, she was even hiding new purchases in her car.

“Hiding purchases from loved ones, feeling guilt or shame around spending, spending more money than one has, and a feeling of euphoria upon purchasing that lasts a short time,” are other hallmarks of an addicted spender, notes Shilati.

“Spending addiction is not much different than the compulsions for drugs or alcohol,” she says. “The effects of the purchasing still relay the same feel-good messages to the mid-brain, thus supporting the urge to want to purchase again and again.”

And so, on and on it goes. Like an alcoholic who turns to booze, addicted spenders buy things to fulfill a need and cover their pain, then rush out to buy more when the high wears off. And just like any other addiction, you can’t necessarily stop just because you want to.

The First Step for an Addicted Spender: Telling Someone

According to Greutman, one of her biggest “a-ha” moments came when she tried to stop overspending, but found she couldn’t. Although she knew deep down her spending was causing issues, she had trouble taking steps to break the cycle. As Greutman has discovered since, not being able to quit is extremely typical of addicted and compulsive spenders.

Fortunately, Greutman was able to tell her husband about their issues before they got worse. From there, they could work on recovering together.

“The day that I laid all of our credit card bills out on our bed and asked Mark to join me was a day that would forever change our financial future,” writes Greutman. Finally tired of living a lie, she told Mark everything – the struggles she was having keeping track of their money, the grand total of their credit card debt, and how she needed help.

After that conversation, Greutman and her husband got on the same financial page for the first time. From that moment on, Greutman began focusing on her transformation from an addicted spender to a recovering one.

How to Become a ‘Recovering Spender’

It’s been six years since Greutman confessed her shopping sins with her husband and turned her life around. Since then, she has become one of the top frugality experts online, scoring a recurring role on The Today Show and building one of the best frugality “mom blogs” on the web.

To share her weaknesses with the world, she also penned “The Recovering Spender,” a two-part book that shares her own story and also offers tips for others who want to break their own addiction to compulsive spending.

Greutman says she’ll always consider herself a “recovering spender.” She still spends money, she says. What has changed is the way she spends money. If you’re struggling with a spending addiction and don’t know where to start, here are a few tips from Greutman and Dr. Shilati.

#1: Recognize you have a problem.

First things first: Before you can work on any problem in your life, you have to fess up to your mistakes. “Much like the alcoholic, it’s imperative that an individual addicted to spending recognize that their compulsion is a problem and it’s creating greater difficulty to manage in their daily lives,” says Dr. Shilati.

Most addicted spenders find out they have a problem fairly quickly, Greutman says. “They don’t know how to stick to a budget, they have little self control when it comes to telling themselves they cannot afford something, and they struggle to make sense of how they got into their current situation,” she says.

People who have a spending addiction may also experience physical symptoms such as sweaty hands, obsessive lip licking, tunnel syndrome and more when they’re shopping.

Addicted spenders often need third party intervention to turn their lives around. “There are a number of resources an individual can connect with in order to take the first step,” says Dr. Shilati. These resources include community support networks such as Debtors Anonymous, individual therapy, financial coaching, or in some more severe cases, residential treatment.

Remember, there’s nothing wrong with asking for help. For a lot of people, help from a qualified network or therapist is an essential component of the recovery process.

#3: Tell your closest friends and family about your problem.

The people in your life may not understand your problem if you never explain what’s going on. For Greutman, telling her husband Mark about her struggles was not only therapeutic, but the family’s first step towards turning their finances around.

A lot of times, getting everything out in the open is the first step. Once other people know what you’ve been hiding, it’s a lot harder to keep up with the charade. Once you bare your soul, you can no longer hide your problems or pretend they don’t exist.

#4: Think about what’s really important in your life.

According to Greutman, addicted and recovering spenders need to identify their priorities, and build a spending plan that supports them.

“A spender needs to sit down and write about their true values in life, “she says. Once they identify their values, they need to think about each individual purchase in terms of whether it’s hurting or helping in terms of their core values and goals.

Greutman’s best advice for someone addicted to spending? Don’t fear the budget. “I had to learn how to consider a budget like a fence around my money,” says Greutman. “The fence is there to keep me safe and secure and to allow me to have fun without any stress.”

While an addiction to spending is a real problem, this condition is treatable, says Dr. Shilati. “As long as individuals are willing to see their problem, acknowledge their problem, and be open to direction from professionals, the outcome for success can be very good.”

As with any other major life change, addicted spenders need to take responsibility for their actions first. Only then will they be able to recover.

If your family member or loved one is addicted to spending, there are plenty of ways to help as an outsider as well, notes Dr. Shilati.

“Family members and loved ones can continue to exhibit an alliance with the client but also recognize the need to set emotional boundaries,” she says. “The key for family members is education and a willingness to participate if needed, such as couples counseling, family counseling or their own individual therapy, so that they can be better prepared to deal with the over-spender.”

Whichever side of the table you’re sitting on, Greutman says there’s plenty of hope for addicted and recovering spenders. The key to recovery, she says, is setting boundaries for yourself and staying true to them.

If you were addicted to spending in the past, what helped you turn your life around? Do you know any addicted spenders who need help?

How to Pay for Elderly Care During COVID-19

Where You Can Open a Roth IRA and Other Reader Questions, Answered