Blogging and Money: Six Trends For 2007

This entry was written as a part of the Reviews and Predictions group writing project at ProBlogger.net. As always, The Simple Dollar is looking to put a personal finance spin on things.

Over the past several years, blogging has grown from a passionate hobby for a few energetic souls into a lucrative business for some and a dream for many. As with any trend that grows into a phenomenon, it doesn’t take long before money invades, and we’ve seen this with the incorporation of context-sensitive advertisement in blogging and a backlash against it, along with hints of other major trends about to appear.

In 2007, I see six major trends emerging in the relationship between blogging and money. These trends will be both a positive and a negative for blogging as a whole. My personal feeling is that the door will be widened for more semi-professional bloggers (ones who generate a solid income stream from blogging, but not enough for full-time employment) but it will be more difficult than ever to build up to this point.

Pay-per-post schemes and the “All I Want Is A PSP” scandal were just the beginning of this trend. 2007 will see more and more paid content appearing in the context of the grassroots as advertisers learn to leverage enthusiastic small-scale bloggers.

Corollary effects of more paid content include:
Small blogs won’t be trusted as easily. You’re a new blogger and you just love your Nintendo Wii? Chances are readers will be much less likely to trust you than they were before.
Blogger ethics will become a big issue. A backlash against paid placement will begin, with many bloggers wearing their ethical standards as a badge. In fact, I’m

already guilty of this, and I expect the trend to continue.
Some popular blogs will begin to develop bad reputations. Whispers about sites such as Gizmodo have already begun, and this trend will continue in the coming year as various sites are revealed to have accepted cash for content. The effects of this are unknown and highly debatable.

A flood of top blogs will be directly incorporated into large media organizations.
Large news organizations will realize that, instead of applying their own staff to blogging (a format that many are clearly uncomfortable with), there is already a pool of great, enthusiastic writers who have proven their success in the field. Thus, in the coming year, many top individual bloggers (and likely their blogs) will be swept into media organizations, often representing publications as their “internet face,” as well as having space in print media.

This makes a lot of sense for three reasons: first, a successful blog is a very clear way of showing to a large media group that an individual has passion, drive, and pre-existing name recognition; second, a successful blog has a built-in audience that can be leveraged onto a print medium and also onto advertising structures; and third, successful bloggers already know how to blog.

Corollary effects of bloggers moving to media companies include:
Some second-tier blogs will make the big time. If you run a popular second-tier blog that hasn’t quite broken through, this could be your year to make the leap. Many second-tier blogs will be looked at and incorporated into large media companies as they seek to diversify their content production.
Some top blogs will take an anti-corporate stand. There will be a small movement against any blogs that “sell out” in this fashion. Already, some readers refuse to read “corporate” blogs, and as the popular second-tier blogs join in (often, the second tier is the source of a lot of the interesting blogosphere content), this will become a bigger and bigger issue.

Feeds will be leveraged as an income stream.
In 2007, more and more creative ways will appear for bloggers to leverage their feeds as a way of making more income. Methods for feed advertising will become more refined and some popular blogs will discover ways to actually charge for the use of their feed.

2007 is the year for this because of Windows Vista and its heavy incorporation of RSS feed reading directly into the operating system experience. As the year goes on and the Vista installed base grows larger, more and more people will discover the power of RSS feeds. This audience will grow, and there will be a very big opportunity for people who figure out ways to monetize this audience.

Corollary effects of more income stream leveraging include:
More and more feeds will have ads in them. If a non-personal blog has thousands of feed readers who never visit the site, it only makes sense for the blog to try to gain some income off of the feed readers. Mechanisms will grow to make this easier and easier, and soon this will be fully accepted.
Some top blogs will offer ad-free feeds for a tiny fee. It won’t be long before some top blogs implement mechanisms for providing certain feeds to certain people, and will begin charging small amounts for ad-free full content feeds, particularly to aggregators.

Blog spammers will become more intelligent.
Blog spamming has hit a wall. Most of the bloggers and entities that care about fighting spam are using clever methods for battling the spam, meaning that spamming blogs with content or creating splogs with content scraped from other sites is less effective than it used to be.

In 2007, I think the tactics of the game will be rewritten. Spammers will start using “smarter” tools for this: they’ll learn to avoid places where defenses are strong (comment spam on well-developed sites) and hit where defenses are weak (real vs. fake filtering).

Corollary effects of intelligent blog spamming include:
Sites with effective comment spam defenses will see the flood subside. Repeatedly spamming a site that just blocks the comments is a net loss for the spammers. Eventually, they will begin to improve their programs to largely avoid sites that have strong comment spam defenses and focus on sites where the defenses are weak. This also means that well-defended bloggers will gradually be able to spend less time battling spam and more time developing content.
Splogs will appear more human-like and will see greater success. As the algorithms for developing automated bogus content grows better, splogs will appear that will fool most algorithms used to determine whether or not blogs are real.
Flagging blogs as real or fake will begin to take off If splogs get too effective, tools will appear for flagging splogs for general audiences, perhaps even becoming a feature in browsers.

Bloggers will band together
Blogging in groups will become a major trend in the future as more individual bloggers come to the (rightful) conclusion that they won’t ever make the “big time” alone. The amount of time to make a top-tier blog is tremendous and it is extremely challenging for an individual to make it work (I only do it because I don’t sleep much).

Group arrangements such as boing boing will become more prevalent as the year wears on. This, of course, leads to some interesting side effects.

Corollary effects of group blogging include:
More blogs with high posting rates will appear. With a team of bloggers, it becomes much more reasonable to keep a blog going and post compelling new content ten times a day.
The average posting rate of a successful blog will accelerate. As more blogs move to this rapid schedule, all blogs as a whole will begin to post at a slightly faster rate.
Blogs who can keep up will make more money. Only some blogs will be able to keep up, and those that do will have more and more pages appearing on Google and linked to by others. There will be some additional room at the top if you can keep up with the pace. 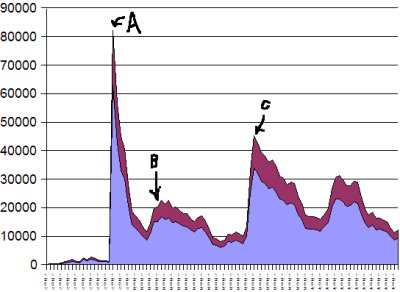 A blogging metric standard will emerge
At some point in 2007, a true standard for comparing blog presence and traffic will emerge. Current tools, such as Alexa and Technorati, have serious flaws that prevent them from being the metric, but they are steps in the right direction.

As more “big money” moves into blogging, the powers that be will demand accurate statistics on where their money is going. Once a standard becomes clear, individuals who avoid the standard will be left out in the cold in terms of attracting advertisers.

Corollary effects of metrics include:
It will become much easier to rank blogs in various ways. The closest thing to a blog ranking that exists now is the very sloppy popular blog listing at Technorati. A strong system of metrics would allow blogs to be teased out based on a wide range of factors.
Reader surveys will become a part of this metric system. Blogs who wish to succeed will have to demonstrate some information about their readers to advertisers. Some, like Gawker Media, are already doing this, but this will become more prevalent in the future.

In short, 2007 will bring a maturation of blogging in several ways. As large media groups continue to move in, blogging outside of the personal realm will be forced to move out of its current gawky adolescence into something of an adult.