Circulation: A Simple Case for Charity

Yesterday, I published an article entitled What Spending a $10,000 Windfall Can Teach You About Your Everyday Finances in which I briefly spoke about the idea of spending that windfall on charitable causes. First, I directly discussed the idea of donating that windfall:

When I think about charitable giving, I think on the local level, much like I do with political giving. The charities in my area that deserves the most attention, in my opinion, are the local food and clothing pantries, which do amazing work in terms of keeping food in the bellies and clothes on the backs of many people in our community.

Later, I talked about the benefits of giving to charity:

The people and things in our community have a lot to do with the quality of life that we enjoy here. Happy, healthy, and secure neighbors and happy, healthy, and secure families nearby add up to a more joyful experience for everyone in our community. The better the community is for everyone, the better it will be for us. That joy reflects back when you see happier and more secure neighbors, well maintained resources, and an abundance of community activities and events. Truly, the best way to have those things is to give of yourself.

This is an idea that I believe in deeply. When you give to charity, particularly on the local level, you improve your community in a number of ways, and those community improvements bounce back to you in countless ways.

One of the big consumers of my spare time is charity work. In the last year, I’ve spent quite a few hours working for a local food pantry (as well as serving on multiple oversight committees). There was one particular experience during one of my food pantry shifts that really made an impact on me and helped me to see the community benefits of working at a food pantry.

An Experience with Charity

I was at the food pantry during a normal evening shift when people come in to receive their food. Our normal process is that each person that can demonstrate need can come in and receive a bag of food for each person living in their home. So, if you have a married couple with three kids that qualify, they can get five bags of food to take home with them.

I usually didn’t deal with that end of the paperwork. Instead, my role is usually to keep the shelves stocked and help people carry things and reach things as they’re choosing items from the shelves.

Unexpectedly, one of the people who arrived in the food pantry was a parent to one of the children that my kids knew. This parent was actually a very good parent – he had multiple nice, energetic children that my kids had played with many times in the past. His children were polite and well cared for – the kinds of kids I’m perfectly happy for my own children to be playing with. I didn’t react any differently toward this parent, as I generally just help people get food when I’m there without any comment unless questions are asked, but I knew that he recognized me as well.

Afterwards, when I reflected on seeing that parent there, I actually felt incredibly happy. I felt as though I could clearly see how my time and energy and donations for a local charity directly helped someone I knew, and how the ripple effect from that actually lifted my children and the community as a whole.

First of all, I knew that the food this guy took home with him would go directly on his children’s plates. That little kid that I’ve seen my own kids playing with would have some good meals in the coming days, regardless of what his family’s financial state happened to be like.

Second, having those meals would add to stability in that home. Those kids would feel more secure about having food to eat at home and that their parents would take care of them. It’s not the ultimate solution to home stability, but it is unquestionably a step in the right direction.

Part of the result of those factors is that those children are better equipped to do well in school. Obviously, this isn’t the perfect solution here, but it is a step in the right direction. I saw that father pick out breakfast cereals, eggs, milk and other items that will put a good breakfast in the belly of those children, putting them on a path to have a good day at school.

Because of that, those children will be less disruptive and better equipped to participate in the classroom. That doesn’t just increase their own learning situation, but improves the learning environment of all of the children in the school. Those kids are going to be less disruptive and require less direct attention from the teacher. Not only that, those children are going to learn more as well, setting them on a better educational track which potentially leads to better economic outcomes for those kids.

The Idea of Circulation

The idea that I’m describing, in which my own charitable work ends up rippling through the community and providing some benefit to my own family (and to everyone else in the community), is sometimes described as “circulation.” It’s the “stone in a still lake” effect – when you make a change in one person’s life, the effects of that change ripple out in unforeseen ways, affecting things in ways that you never quite see or expect.

The challenge with circulation is that you often don’t directly see the effects of what your good deeds actually do. The story I’m telling above is of just one family, but on a given week at the food pantry, as many as 50 or 60 people will come through. Each one of those people has their own life story and many have their own families that receive some positive benefit from the charity. It’s like throwing a big handful of stones into a still pond – there are so many ripples everywhere that you can’t possibly understand or see all of the positive effects, and many of them bounce off each other and create even more positive ripples.

I think that circulation is a great way to describe it. Eventually, the ripples that come from that positive act cycle around and affect me in some positive ways, usually in ways that I can’t see or connect to the charitable act. For me, the rare instance when I can see that circulation, as in the story I told above, is very valuable to me. It’s just that there are many, many more stories like that that I don’t see. 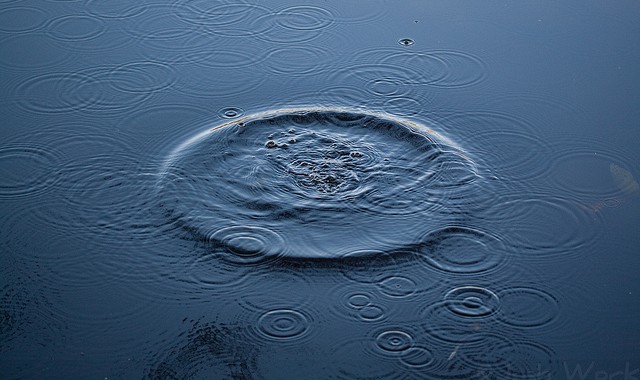 The Challenge of Charitable Giving

This is obviously a good idea on paper, but when we look at our own resources, it becomes a much more difficult situation. The reality is that all of us have limited resources to give. There are only 168 hours in a week and most of those hours are accounted for if you’re working, eating, sleeping, and carrying on basic life functions. Most people are also very financially restricted as well. It’s easy to see the positive circulation effects of charity, but it’s a lot harder to make the choice to take something out of our lives and toss it into the still waters to see the ripples.

Here are a few things to keep in mind if you’re considering charity but are really stretched financially or are in the midst of a financial recovery.

Even small amounts help. A $5 donation to your local food pantry buys a surprising amount of food. Food pantries often have agreements with various other organizations and businesses to buy food items at a discounted price, so your $5 donated to the food pantry goes farther than spending $5 at the grocery store.

Donate your own unwanted items. Let’s say you clean out your pantry and find a bunch of extra boxes of spaghetti that you won’t be using any time soon. Those boxes can make a great donation to a charity. The same is true for almost any extra nonperishable food items or any extra household supplies. If you’re not going to use them, someone else can get a lot of good from those items. You can use the same approach with your extra clothes and the local clothing pantry.

Give your time. If you have a free evening once a week, consider donating your time to a charitable cause. Charities have all kinds of uses for spare hours that people donate, often doing things that you wouldn’t expect like filling out paperwork, reorganizing things, cleaning, or other basic tasks.

Give your skills. If you have skills that might prove useful to a charity, such as grant writing skills or IT skills or speaking skills, don’t be afraid to offer up those skills, either. Most charities can find a way to put those skills to use, which will save them a lot of money as they don’t have to hire out for those skills. They can use that money for their own cause instead.

Give without charitable structures. You don’t even have to give to a charity. You can give by being a positive member of your community. Smile at people on the street and in the store and greet them positively. Give people assistance in the moment, like returning their shopping cart for them in the parking lot. Do this without regard for the recipient – help the well-dressed person and the roughly-dressed person equally. Little moves like this lift the recipient’s day and create that very circulatory effect I was talking about earlier.

In the end, it’s up to you to build the kind of community you want to live in. You build it both with your big actions and choices, like donating time and money to a charity, and your little ones, like helping someone who’s struggling to load their groceries into their car. Regardless of the positive action you choose, it creates a circulatory effect that raises the lives of people throughout your community and ends up reflecting back on you in ways you likely will never directly see, but in those rare moments when you do see that circulation at work, it makes you feel pretty good, too.