Why I Sometimes Regret Choosing Harvard over Community College

Back in 2008, I was a junior at Harvard University. It was around 10 p.m., and I was heading back to my dorm room after raiding our dining hall, which was offering free cookies that night.

I was sharing an elevator with a classmate who was holding an astounding amount of cookies. I’d seen kids take a few back to their room, but this was like he was planning to feed the entire New England Patriots offensive line. I felt compelled to say something.

“They’re for my study group. We’re going to be up all night working on our problem set. What are you doing?”

He looked confused. Maybe even like he pitied me a little. I don’t think it had ever crossed his mind that someone would need late night cookies to fuel anything other than marathon coding sessions or complicated calculus homework. Didn’t I know that midterms were coming up?

Is an Ivy League name on your resume worth $160,000 in loans? Maybe — but it’s not a given. Photo: Harvard University

I did know, but I didn’t care. I was much more interested in playing as myself in the latest NCAA basketball video game (I could finally dunk!). Or defending a tower on my computer. Or becoming immersed in whatever other distraction seemed more important than my schoolwork.

Looking back, that moment has always stuck with me as a sign that I was probably not mature enough to be in college at that time. I had an unbelievable opportunity at my fingertips, and I was skating by, doing the bare minimum.

That would not have been a huge issue if my college tuition were paid for, but that was far from the case. I graduated with over $160,000 in student loans that I will be paying off for a long time. No matter what school you go to, $160,000 is a lot of debt to rack up for a bachelor’s degree.

While I will always have the Harvard name to throw on my resume, for a long time, that was all I had. Literally. I never worked in school, I never had an internship, and I wasn’t graduating with honors, to say the least. No joke, this is the resume I used when applying to my first real jobs: 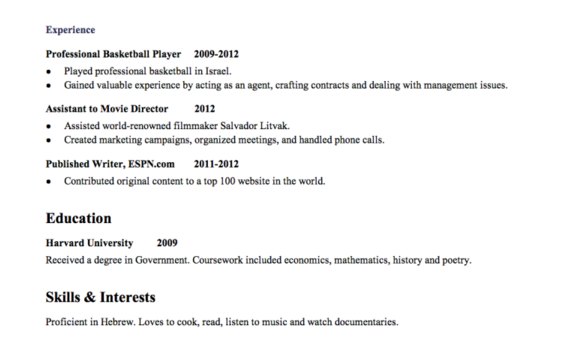 I didn’t even have the margins lined up. I’m pretty sure I wanted the text to be different sizes in some areas. The idea that I acted as my own agent while playing basketball was only a half truth.

Overall, it’s cringeworthy and embarrassing. Thus, I didn’t have people scrambling to work with me. I’ve managed to find a decent writing niche for myself over the years, but it’s been a slog.

Just to be 100% clear: I’m incredibly lucky to have gone to Harvard, and I’m grateful for the experience.

That being said, would I have been any worse off if I’d gone to a local community college, learned to grow up a little, realized the value of working hard in the classroom, and then finished off at a good four-year university with a solid GPA?

I know, I know. I’m an entitled brat, going to Harvard is always the best decision anyone could make, and I should shut up.

While that’s true to a certain extent, is it that cut and dry? Could I have ultimately been better off going to community college, or skipping school altogether? As student loan debt continues to outpace housing debt in the U.S., and college becomes increasingly unaffordable (tuition at Vassar is up to $51,000 per year), a lot of people are starting to ask that question.

A recent survey out of WGBH in Boston asked people nationwide how they would advise a high school senior who just inherited $200,000 and wanted to go to college. The majority of respondents said they’d tell that kid to “Spend some on community college and save the rest” rather than putting it toward tuition at a private, four-year school.

Many people believe it’s valuable to have some form of higher education, but that spending outrageous sums of money to go to a pricey four-year school isn’t worth it. And they might not be wrong.

The American Association of Community Colleges points out three other huge pluses: Flexibility, location, and variety. You can pretty much study what, when, and where you want. And if you decide to transfer to a four-year school, the acceptance rates are roughly the same as they would be if you were an undergraduate.

I haven’t even mentioned the many benefits of attending a trade school or doing an apprenticeship, or the even more radical idea of skipping college altogether.

You always hear about opportunity cost, or the money lost when one alternative is chosen over another, when people are considering a JD or an MBA. It rarely comes up with regard to undergraduate degrees, but it should.

If you’re not hyper-focused on acquiring a degree that will multiply your earnings, you could be better off financially if you just enter the workforce at 18. If you chose to do so but you still want some higher education, you could take advantage of the numerous and wonderful free websites that offer college-level courses. You want a free course on the computational mechanics of engineering (whatever the heck that means) from a professor at MIT? Have at it! What’s more, many jobs offer tuition reimbursement — meaning, if you have the time and energy, you could earn your degree part-time for free or at a discount.

You don’t have to feel like you’re limited if you choose an alternative path. A senior vice president in charge of hiring at Google recently said that they are hiring more people without college degrees than ever before.

What he’s saying (if you read between the lines) is, “We at the top tech companies are more likely to hire a self-taught, highly ambitious coder who never went to college than someone who went to Harvard for four years, skipped too many classes, and came away learning nothing but arcane knowledge about Japan’s bicameral legislature and how to sweet talk the dining hall staff into making him burgers after the grill was closed. We don’t want your kind here, Drew!”

If you’re on the fence about college at all, there’s no need to feel like a pariah. Independent thinkers and self-directed learners have never been more valued. And if you want to go to a community college, that is a fantastic option as well. You’ll gain skills, you’ll mature, and you can save serious money.

If you want to achieve financial independence in a reasonable amount of time, not being saddled with student loan debt is absolutely critical.

I’m ultimately happy that I went to Harvard — and again, I understand that I am privileged and lucky. I just truly think my life would have turned out just fine had I instead chosen to attend community college and then transferred to a state school.

If I had taken that route, it’s far less likely I’d have joined the 30% of millennials who say they would seriously consider selling an organ on the black market to get out from under student loan debt. If appendixes are in demand, sign me up.